This is the seventh entry in a six-week series of topics following the syllabus of my Human Nutrition & Obesity graduate summer course. Each entry offers a snapshot or principal take home message from that lecture. This lecture was entitled: Carbohydrates for Better or Worse. Follow for updates: @DrTomSherman or @GUFoodStudies 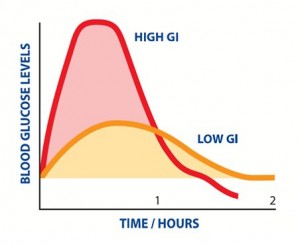 You are undoubted familiar with the story. A middle-aged physician grows increasingly frustrated with his weight gain. After trying several diets unsuccessfully, he experiments with his food choices and comes to learn that severely limiting his carbohydrate intake not only caused him to lose weight, but that he did so with less hunger and a drive to eat. As a result, he summarized his findings in a book that became a best seller and started a new diet craze. 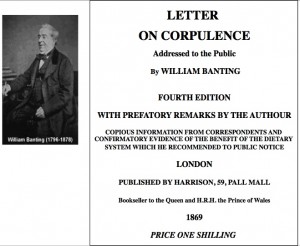 Of course, I am talking about … Dr. William Banting and his 1869 best seller Letter on Corpulence. Who did you think I was talking about? With regularity every few generations, someone “rediscovers” the connection between carbohydrate intake and weight gain and dares to challenge the conventional wisdom (whatever wisdom) of the time (whatever time) and point an accusatory finger at carbohydrate consumption as a major cause of weight gain. Dr. Atkins was imperfect, and his diet, as formulated, ultimately ineffective (although better than most), but he successfully identified the overconsumption of carbohydrates and other simple sugars as a major contributing factor in weight gain and increased risk of type 2 diabetes.

A bit more than half of the calories in the average American’s diet is carbohydrate, and a bit more than half of these calories come from just seven sources: 15% bread, 9% sweetened sodas, 7% cakes & cookies etc, 6% sugars syrups & jams, 5% white potatoes, 5% ready-to-eat cereals, and 5% milk. The difficulty with these seven sources is that they are all high glycemic index (GI) foods, and as illustrated in the introductory graphic at the top, high GI foods are characterized as heavily processed, generously sweetened, easily digested and quickly absorbed sources of sugars that result in a rapid rise in blood glucose levels. The steep rise in blood glucose triggers a robust insulin response by the pancreas designed to stimulate insulin-responsive targets, such as muscle and fat tissues, to take up this glucose in order to lower circulating levels of glucose back towards normal levels.

To this point, the system is working as it should, so what is the difficulty? As illustrated at top with the red line, high GI foods result in such a robust insulin response that the rapid rise in glucose is followed quickly with a rapid decline in glucose that frequently overshoots its target, resulting in a transient state of hypoglycemia, meaning that blood glucose levels go below normal, and therein lies the rub*. Transient hypoglycemia directly contributes to: 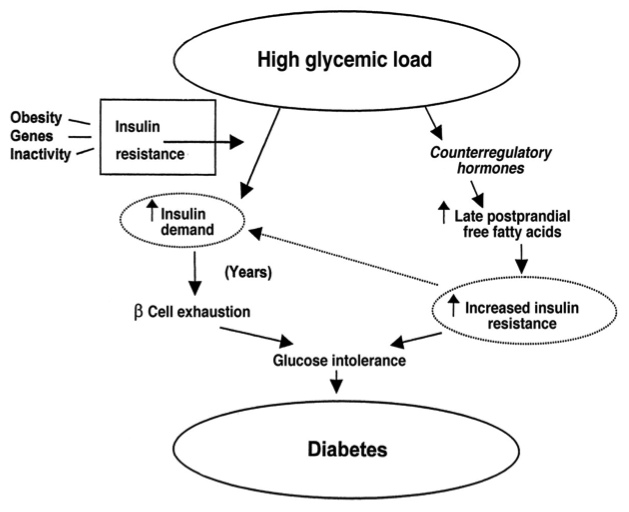 Following the left side of pathway above, a high GI diet leads to repeated cycles of insulin secretion, that over the year may lead to pancreatic β-cell exhaustion (β-cells secrete insulin, and α-cells secrete glucagon). β-cell exhaustion is reflected in a decreased insulin response to glucose (chronic hyperglycemia), manifested by glucose intolerance, a symptom of type 2 diabetes. This path is influenced by excessive weight gain, genetic background and lack of exercise.

On the right side, the constant release of glucagon leads to repeated cycles of high triglycerides, similarly leading to insulin resistance: the inability of insulin to work well. This requires even more insulin to be released, exacerbating β-cell exhaustion and glucose intolerance.

Diabetes is a direct consequence of a diet rich in sugar and high GI foods, and one of the best strategies for avoiding this scenario is understanding what makes a food a high GI food and countering it. So makes factors contribute to a food’s glycemic index? 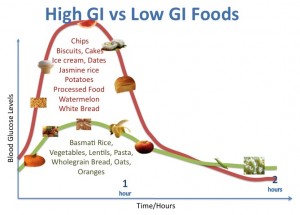 Sugar: decreasing the amount of simple sugars in the diet is the best advice possible, and this means eliminating sweetened sodas altogether.

Processing: the more processed a food is, the more easily it is digested and the more quickly it will digest starches into sugar. The benefits of moving to a whole foods diet cannot be underestimated.

Overcooking: many foods contain starch, and many foods are predominantly starch, such as pasta. The more pasta, for example, is cooked, the more gelatinized and swollen are the starch grains, increasing the surface area available for digestive enzymes to attack. Keep pasta to al dente and avoid over-cooking vegetables so that they not only taste better, but are also digested more slowly.

Fiber: the presence of fiber in foods slows their digestion. Juicing and processing removes fiber; this is why fruit juice has a high GI and whole fruit is not. A move towards whole foods also means including more fiber in the diet.

Fat: including more fat with your meal also slows digestion. An unfortunate consequence of the low fat diet craze was the unfortunate increase in GI of all foods.

*a slight misquote from Shakespeare’s Hamlet as part of his “To be or not to be” soliloquy, meaning something you say when explaining the difficulty of a particular situation.