This is the fourth entry in a six-week series of topics following the syllabus of my Human Nutrition & Obesity graduate summer course. Each entry offers a snapshot or principal take home message from that lecture. This lecture was entitled: Good Fats and Better Fats, Part 1. 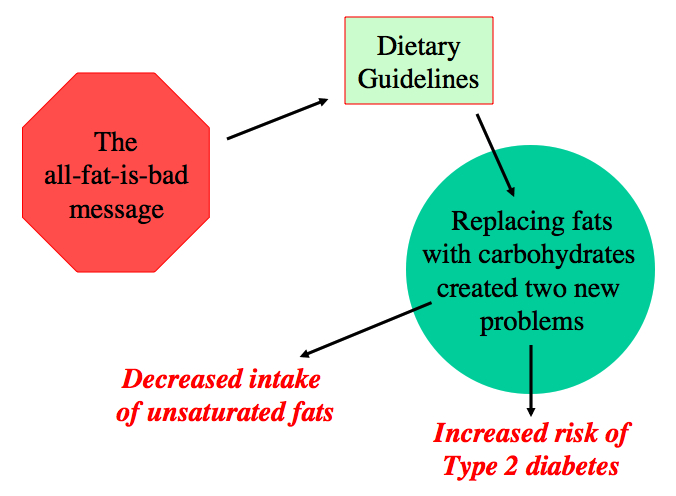 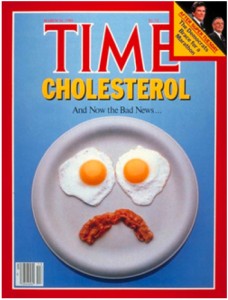 In 1949, two Oxford University scientists documented a dramatic increase in coronary heart disease. In 1950, epidemiologist Ancel Keys proposed that the concentration of plasma cholesterol was proportional to dietary saturated fat intake. Three years later, a study comparing myocardial infarction patients and controls established that those with disease had higher cholesterol levels. Since then, many studies have shown the relative risk for myocardial infarction is anywhere from 2.5 to 4 times greater for those with high total cholesterol and/or low HDL cholesterol. By the late 1970s and early 1980s, public health officials reached a fateful conclusion: we are eating too much fat and cholesterol, and we need to eat less. In reality, these officials believed we were eating too much saturated fat, but a recommendation to eat less saturated fat was deemed too complicated for the public to grasp. The cover of the March 1984 issue of TIME magazine, shown above left, featured an article with the headline: Sorry, It’s True. Cholesterol Really Is A Killer. With this decision, the low-fat age began, and with it came tremendous unintended consequences to public health. Recommendations to lower fat intake was the logical response to the consensus explanation for heart disease, and what came to be known as the Classic Diet-Heart Hypothesis: 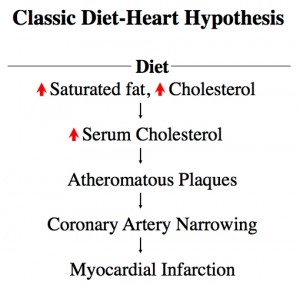 More than a generation has grown up since the advent of the all-fat-is-bad message, and the it has been embraced like few public health campaigns are. Between 1971 and 2000, for example, the percentage of fat in the American diet for women has fallen from nearly 37% to 32.8%. Over this same period, however, total caloric intake for women has increased from 1542 kcals to nearly 1900 kcals, and from 2450 kcals to 2618 kcals for men, obesity skyrocketed, and the incidence of heart disease continued unabated.

The difficulty with the all-fat-is-bad message is not only that all fats are not bad, but also that fats are very, very good, and the simplistic idea that eating fat makes one fat is not true. Firstly, in country-to-country surveys across Europe, women with the lowest fat intake are the most likely to be obese, while those with the highest fat intake are the least likely; there is no correlation between fat intake and obesity. Secondly, dietary fats are more than dense calories, but constitute critically important building blocks for cell membranes that ultimately govern blood clotting, susceptibility of the heart to erratic rhythms, LDL/HDL ratios, and central nervous system function, including intelligence and mental health.

As the flowchart illustrates in the introductory graphic at the top, the all-fat-is-bad message shaped dietary guidelines that encourage us to eat less fat, but in reality, enticed us to eat more carbohydrates. Food manufacturers were more than willing to jump on the low fat bandwagon, and began marketing foods with flavors now fortified with sugar instead of fat. The consequences, we now realize, are two-fold: decreasing the intake of all fats lead to decreased intake of important long chain polyunsaturated omega-3 fatty acids (of which we will discuss in much more detail in a near future lecture), and the overconsumption of carbohydrates and sugars lead to weight gain, exacerbating insulin resistance and obesity, and increasing risks for type 2 diabetes. The experiment depicted in the figure below, a portion of Figure 2 in a New England Journal of Medicine paper [NEJM 337: 1491 (1997)], illustrates the problem succinctly: 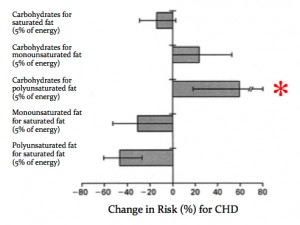 The study estimated percent changes in the risk of coronary heart disease associated with isocaloric substitutions of one dietary component for another. Substituting carbohydrates for polyunsaturated fats, for example (*), increases the risk for CHD by more than 60%. This is exactly what the all-fat-is-bad message and the dietary guidelines directed us to do!

In response, I offer the following evidence-based diet-heart hypothesis, which would advocate for limiting carbohydrate and sugar intake and actively seeking foods rich in the unsaturated fats. 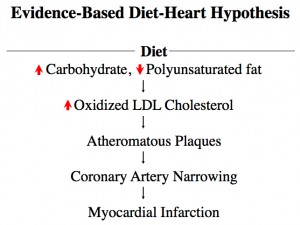 Coronary heart disease rates can be dramatically reduced by nutritional means, but this will not be achieved by replacing saturated fat with carbohydrates. We should abandon recommendations regarding percent of energy from fat and avoid pejorative references to the fat of “fatty foods.” Advice about dietary fat should focus on replacement of saturated and trans fat with vegetable oil, including sources rich in omega-3 polyunsaturated fatty acids (fish, nuts, and seed oils).