If you are in the medical education business as a student, resident, staff person, or faculty member you’ve surely been there: having to provide feedback to somebody about their actions, skills, and competencies, or being at the receiving end (or, more likely, both). Feedback is often not easy to give, or receive.

Our upcoming Grand Rounds will feature Dr. Carrie Chen, Associate Dean of Assessment and Educational Scholarship and Professor of Pediatrics at Georgetown University School of Medicine, who is an expert on feedback in medical education. You can read her bio here: https://som.georgetown.edu/studentaffairs/thedeans#Chen

Her talk is titled: Feedback: What is the Evidence and What Should We Be Doing?

I asked her about giving and receiving feedback and about her sojourn in The Netherlands.

Mishori: Your talk is about giving feedback. It seems easier said than done. Why is that?

Chen: I think because it is really a skill that few of us ever received training to do, especially how to do it given our busy circumstances.  To do it well, it also requires some forethought.  We have to think about what message we want to get across, how best to word it, and how we can support the learner to receive and make use of the feedback.  Often we do not give ourselves the space to think about and plan for it.

Mishori: What is the worst feedback you’ve ever received?

Chen: I can’t think of the worst feedback.  Mostly I think of times where there was no feedback or very general non-helpful feedback.

Mishori:  Was there ever a time when you received negative feedback, was hurt at the time, but in retrospect feel it was beneficial to your career or even transformational?

Chen:  I distinctly remember an episode of feedback from residency that came from one of my favorite attendings.  He told me that because I was a good resident, people did not give me much constructive feedback.  But because he cared and believed in me, he was going to tell me that I was capable of being better.  It was a bit of a shock and it took me a few days to process it, but it was the best and most helpful feedback I received during my entire residency.  He became one of my most important mentors and friends.  He would say things to me such as “This is going to be hard for you for x and y reasons, but this is important for you to do because it will help you develop in z way.”

Mishori:  Tell us about your time in Utrecht. How long did you live in the Netherlands for?

Chen: I was there for a year on sabbatical after finishing my PhD.

Mishori:  What are some of the cross-cultural lessons you learned living in the Netherlands?

Chen: The Dutch are very direct and there is little hierarchy.  Students are comfortable speaking up and questioning the faculty in a constructive way.  Feedback was not unkind, but it was direct and left less room for misinterpretation.

Mishori: How many pictures do you have of yourself with a windmill in the background or on a bike? (and can you share any)?

Chen: Interestingly, I have many photos of windmills and bicycles and of other people in front of windmills, but can’t find one of myself in front of a windmill…  It is complicated by the fact that my computer was stolen (along with all my photos) over a year ago.

Mishori: what other photos could capture your passions outside of work?

Chen: It is of me learning how to make paella at a cooking course in Barcelona and the final product.  I love doing cooking courses and had done a weeklong one previously in Italy. 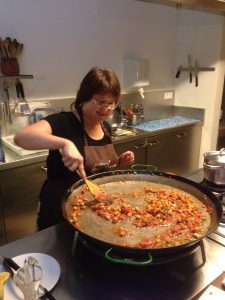 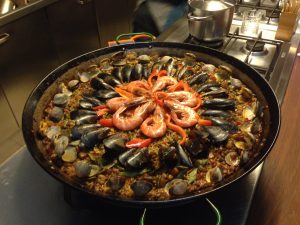 Mishori: Wow! May I ask what kind of feedback you received for this creation?

Chen: Ah, well, it was a group endeavor.  There were about 8 students in the class and we all worked on the entire meal together.  During the process, the teacher demonstrated techniques and as we practiced, we also gave each other feedback and tips.  Ultimately, we sat down to eat and discuss the meal together, which was a group self-assessment.  The entire thing was formative – no summative assessment.  🙂

To hear more from Dr. Chen about giving (and receiving) feedback, join us.

Zoom: Can’t attend in person? Join us electronically through Zoom at

Refreshments will be served.