Marta Aparicio (COL ’14) studied Sociology and Government at Georgetown. Marta is a 2018 recipient of the Rangel Fellowship.

At Georgetown University, I developed an appreciation for cultural diversity, as well as U.S. politics through academic coursework and community service. My curiosity about the role of global politics also motivated me to study abroad for six months in 2013 in Madrid, Spain. I took the opportunity to teach English to my host siblings and engaged in political discussions in Spanish with my host parents and classmates.  As a Guatemalan-American representative in Europe, I gained an understanding of people’s cultures while working and building relationships with them.

Upon completion of my Bachelor’s Degree, I explored avenues in the private and public sectors, specifically in retail, education, and social care. After my second year of working full-time, I thought more in-depth about my “dream career” and I concluded that throughout my personal and professional experiences, I have made public service to others a core component of what I do. Therefore, I wanted to have a proud profession where I could continue serving others beyond the walls of my community. Additionally, I felt it was time to go back to school and pursue a Master’s Degree. After thorough research, speaking with my mentors, and reaching out to a Georgetown friend who is a current Foreign Service Officer, I concluded that the State Department Charles B. Rangel Fellowship was perfect for me. My new goal was to be part of the Rangel Family.

The goal of the Rangel Fellowship is to attract and prepare outstanding young people for careers in the U.S. Foreign Service and to diversify the profession in order to accurately reflect the rich diversity of the American people it represents overseas. The Rangel Fellowship put both of my goals together – my goal of pursuing my Master’s Degree and my goal of becoming a U.S. Diplomat.

I had the honor to be selected as a 2018 Rangel Fellow on November 2017. My journey started in May 20th, 2018 with a one-week orientation to the Rangel Fellowship and the Foreign Service in Washington, D.C.. The orientation was followed by a 10-week internship on Capitol Hill, where I had the opportunity to intern with ranking member, Senator Jack Reed from Rhode Island.

As a Congressional Fellow, I conducted research, wrote memos, and worked closely with the Senior Policy Advisors on issues such as education policy, immigration, and economy. On June 6th, Senator Reed requested floor privileges for me to have access to the Senate Chamber. With this access, I had new opportunities to witness my Senator and other senators speak over critical issues in our country. Overall, the congressional internship helped me learn more about how Congress operates and influences U.S. foreign policy.

During the course of my internship, I participated in professional development workshops, learned about the foreign service through other diplomats and ambassadors, attended an Ambassadorial Swearing-in Ceremony, and even had the opportunity to have lunch with the Deputy Assistant Secretary for Central American, Cuban, and Mexican Affairs at the 8th floor Diplomatic Dining Room at the State Department.

With the help of the Rangel Fellowship, I am currently pursuing a Master of International Affairs at the School of International and Public Affairs (SIPA) at Columbia University, with a concentration in Urban and Social Policy, as well as a double specialization in Latin American studies and the United Nations. As a future Foreign Service Officer, I think it is important to study urban cities, so I can prepare myself to think and engage critically about the economic, social, political, and technological forces that are shaping urban areas across the globe.

As part of my Rangel Fellowship, I will also have the opportunity to intern at the U.S. Embassy in Bogota, Colombia for 10 weeks during summer 2019. While working at the embassy, I hope to draw upon my professional skills and growing knowledge of the U.S. policies towards Latin America to contribute my unique perspective and complement the work of other embassy staff.

As a State Department Rangel Fellow, I am gaining considerable knowledge of Foreign Service missions, objectives, and lifestyles – that will further prepare me for the consular track. It will be a privilege to continue being an active citizen as a U.S. Diplomat representing America and promoting its national interests abroad. Since emigrating from Guatemala 15 years ago, the United States has empowered me to make a better life for myself to serve my country! 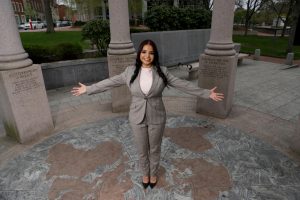 Marta standing open-armed on a mosaic floor depicting a map of the world.

Kala Deterville graduated from Georgetown in 2018 with a Bachelor of Arts in Government and Japanese.

As a 2018 Charles B. Rangel International Affairs Graduate Fellow, my journey began in Mid-May when I started a ten week internship with Congressman Gregory W. Meeks. This internship experience provided me with a deeper understanding of the critical role of the legislative branch in U.S. foreign policy and the functioning of Capitol Hill. Given that Congressman Meeks is the ranking member on the House Foreign Affairs Subcommittee on Europe, Eurasia, and Emerging Threats, I became interested in Europe as my second region of expertise and will therefore be interning next summer at the U.S Mission to the European Union as a part of the program’s overseas internship obligation.

Currently, I am in my first year at Columbia University’s School of International and Public Affairs (SIPA), where I am pursuing a Master of Public Administration with a concentration in International Security Policy and East Asia regional specialization. The courses I have been taking at SIPA are equipping me with the qualitative and quantitative analytical skills and managerial skills needed to tackle complex foreign policy issues.

The Rangel Fellowship has thus far allowed me to gain the academic and professional skills needed to be successful as a foreign service officer. Most importantly, I have become a part of a family of aspiring and current diplomats of Rangel fellows, who are eager to shape foreign policy and serve our nation abroad. I am not sure what the future holds in my career but whether thats serving in Egypt or France, I am ready to be flexible, optimistic, and hard working.

I am beyond excited to start my career as a foreign service officer once I graduate in 2020 but for now Brussels and second semester Macroeconomics awaits! 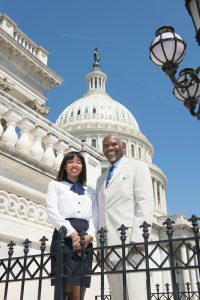