Ben Johnson’s Reflection on Year One of the Marshall

Ben Johnson is a 2018 recipient of the Marshall Scholarship studying human cognitive neuropsychology at the University of Edinburgh. Ben (NHS ’17) is on leave from Johns Hopkins University School of Medicine while he pursues his studies as a Marshall Scholar.

Six months since moving to the United Kingdom, it’s hard to decide if it’s been an age or an eyeblink. Time has flown, but it has also been so full of adventure that almost every week is a remarkable one. One of the first major decisions of being a Marshall Scholar is determining where in the UK you would like to study—from sleepy southern coastal cities, to the incredible super-metropolis of London to Oxbridge’s ancient halls of learning to the cold and rocky north. The flexibility of the scholarship, to attend any UK university, in any city, and study any subject, is a major advantage. For me, I was slightly nervous to choose the road less traveled by selecting to go to the University of Edinburgh in Scotland, but the choice has absolutely paid off in the unique cultural experience I’ve had.

The university, which turns 437 years old this year, never fails to impress, with its history as a center for medicine, philosophy, and computer science. It has an incredible list of discoveries and alumni including Bayes, Darwin, Hume, Alexander Graham Bell, Robert Louis Stevenson and many more. Even just walking to class along cobblestone streets has an element of grandeur to it, as Edinburgh tends towards stately stone architecture, reminiscent of Georgetown’s Healy Hall. Despite all the city and institution’s historical ties, I study a rather modern subject, Human Cognitive Neuropsychology, essentially the science of relating neurological techniques such as MRI and EEG to the psychology of memory, personality, and disease. For my dissertation, I will be studying how teamwork changes in the extreme environment and isolation of Antarctica. Since UK master’s programs are only one year long, the dissertation work has come up on me very quickly, but the positive aspect is that I will be able to achieve masters degrees in two different subjects in the two years of the scholarship!

As I alluded to, Edinburgh is a cultural gem. While my British friends have taken me out for UK-wide holidays such as Bonfire (Guy Fawkes) Night, I’ve particularly enjoyed Scottish holidays such as St. Andrew’s Day and Robert Burns Night. For Burns night, the tradition is to eat haggis and recite Burns’ deeply Scottish poem about the dish, “Auld Scotland wants nae skinking ware/ That jaups in luggies/ But, if ye wish her gratefu prayer/ Gie her a Haggis.” Other wonderful activities have been many ascents of the rocky summit of Arthur’s Seat overlooking the city, and trips through the midlands to Sterling Castle and Linlithgow Palace as well as up to the Highlands to see Inverness and cycle along Loch Ness.

The Marshall Scholarship, named after American Secretary of State George C. Marshall, is a living gift from the people of the United Kingdom to the USA. In addition to the tuition fees and living expenses that it covers, there are a number of remarkable events throughout the year that the Marshall organizes. These have been very special indeed such as our initial reception at the UK Foreign and Commonwealth Office, with opportunities to meet Members of Parliament and high ranking diplomat staff. Additionally, the Marshall staff advertises speaking opportunities to UK universities, and so to date I have given two talks already, at Newcastle Uni and Uni of Exeter, on the Marshall Scholarship and my research on space medicine, both of which have led to additional connections and opportunities for me, as well as being funded opportunities to check out new cities. A big event that is coming up in a few weeks is the Marshall class trip to Belfast, in Northern Ireland. I’m very much looking forward to it, not just because of Northern Ireland’s pivotal role in recent UK history, but also its current complicated involvement in the Brexit negotiations. It is certainly an interesting time to be in the UK.

Lastly, and perhaps the element that is only beginning to make itself clear to me, is the wide variety of highly talented people that I have been meeting in the Marshall class. From musical composers to policy buffs, future diplomats and future doctors, there is an array of interesting futures ahead for my fellow Marshall Scholars – it will be incredible to watch them all achieve their potential and continue to be friends with so many highly capable people I wouldn’t have otherwise met! For next year, I am looking forward to moving down to London, continuing my exploration of space medicine, and enjoying the people, places, and events of the Marshall and the UK. 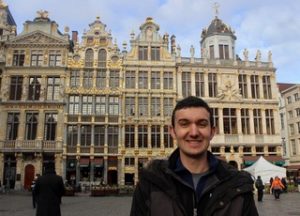 Ben standing in front of the Guildhalls of Brussels.

You’re off the Treadmill: A Reflection by Mathew Quallen SFS’16

Matthew Quallen is a 2016 graduate of the School of Foreign Service, where he majored in International History, and currently the holder of a two-year Marshall Scholarship for graduate study in the United Kingdom.  During his time at Georgetown, Matthew worked at the Supreme Court, the Brookings Institution, and served as a member of the Working Group on Slavery, Memory and Reconciliation.  In Britain, Matthew has just completed an MA in History at the University of Manchester, with a concentration in the Lancashire Cotton Famine — an economic crisis in Britain resulting from the American Civil War.  This year, Matthew will study for an MSc. in Law, Anthropology and Society at the London School of Economics and Political Science. Here are Mathew’s reflections on his time as a Marshall Scholar thus far:

Almost every organizational orientation involves a stock phrase—a set of words repeated reluctantly but reliably, like a cliché. At orientations for new Marshall Scholars, that slogan is “you’re off the treadmill”.

“You’re off the treadmill”—it has the sort of clarity that comes from being evocative but vague, like saying the rat race is over. Off the treadmill, fine. But still running? What does it mean to have been running without moving? And what constituted the treadmill in the first place?

Without dwelling too deeply on a metaphor, I want to think about what it says about a fellowship. Because the concept of being off the treadmill suggests a rupture of some kind: that there is something different about being on the treadmill and being off of it, and that being on a fellowship reflects this difference.

The most significant difference suggested by the metaphor, and the most relatable across postgraduate life general, is a change of direction. Treadmills tell us where to run—forward (but ultimately, without advancing). By contrast, the runner in the world has to decide where to go. In the context of the Marshall, I’ve found this to reflect a lack of close management and the disappearance of many signposts for success. One may study at any university they choose. As long as one completes their proposed course of study, they are welcome—within reason—to do what they please. Especially living abroad, there are fewer structures to guide one’s choices. It is up to the recipient to decide whether they would rather study, vacation, learn a new skill, try a new sport, learn a language, or whittle away months at a gym.

To a limited degree, freedom is natural on a fellowship. For many fellowship recipients, the year, two years, or even three spent abroad is a hiatus, a waystation—remove the fellowship and you might simply leapfrog to the next step. A sense of freedom can be one of the most rewarding parts of a fellowship—if leveraged. I chose to spend several months studying the medieval history of the book. I will likely publish in the field. But medieval history is not and will never be my profession.

Despite the advertisement, this apparent directionlessness is available to undergraduates as well. And students in high school for that matter. What it really represents is an increasingly variable blueprint for success—getting good marks in a good program is wonderful, but it is not revered as success. Grades will come less often and mean less. Nobody will tell you what to do. There is no treadmill on offer, and being off the treadmill requires not only selecting, but often designing one’s own destination.

In truth, I am skeptical of the idea that fellowships take people off the treadmill. I think they largely aim to select those who have made the decision, at least at some point, to forgo the treadmill—in other words, to eschew a typical path to success (say, consulting at Georgetown) and do something different. Something, usually, they designed themselves—be it a role as an advocate, a topic of research, or an organization built from the ground up. At Georgetown, we should aim to be off the treadmill already.

Erika Raven (G’17), a Ph.D. candidate in Georgetown’s Interdisciplinary Program for Neuroscience (IPN), has been selected as the 2017 Marshall Sherfield Fellow for postdoctoral work in the United Kingdom. The Marshall Sherfield Fellowship, administered by the same commission that awards the Marshall Scholarship for graduate study, provides the opportunity for American scientists or engineers to engage in postdoctoral work at a British university or research institute.

Erika is one of three members of the Georgetown community to receive this prestigious award for the 2016-2017 application cycle. Learn more about Erika’s plans to undertake research on the cognitive effects of iron deficiency here. 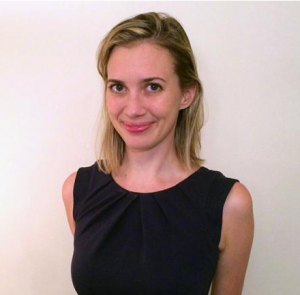 Recent Georgetown graduate Seamus Caragher (C’16) has been named a 2017 Marshall Scholar and will study for the next two years in the United Kingdom. Seamus plans to pursue a one-year master’s degree in Cancer Sciences at the University of Glasgow in Scotland and another one-year master’s degree in Technology Policy at the University of Cambridge in England. Read more about Seamus’ research aspirations here. 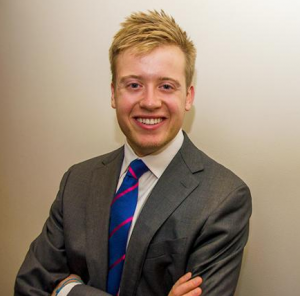