Garrett Hinck (SFS ’18) studied Science, Technology, and International Affairs while at Georgetown. Currently, Garett is a Research Assistant in the Nuclear Policy Program at the Carnegie Endowment for International Peace.

Like most students in the School of Foreign Service, I was obsessed with learning the intricacies of policymaking from my first day at Georgetown. Many students pursue opportunities in government – in federal agencies or on Capitol Hill – to quench that thirst, but for me the truly intriguing area was actually outside government in the think tank space. After completing my senior year, I started a 1-year stint at the Carnegie Endowment for International Peace as a James C. Gaither Junior Fellow and have had an incredibly fruitful professional experience at Carnegie ever since.

Think tanks are an odd set of institutions – while ostensibly devoted to research on policy questions, they often serve more as intellectual hubs that bring together experts and government officials to move ideas from paper into policy. In my time at Carnegie, I’ve found that often the most effective thing that think tanks can do is provide deeper analysis to policymakers who simply don’t have time to think about the long-term consequences of their decisions. Carnegie is somewhat unique from other think tanks because of its network of centers in world capitals (Beijing, Moscow, New Delhi, Brussels, Beirut) and consequently it has a more global worldview focused on international diplomacy.

When I started at Carnegie, I wasn’t sure what to make of my role. I quickly learned that as a Junior Fellow I was an invaluable part of our team’s work – I was one of two research assistants on the team of the Cyber Policy Initiative and I was immediately called upon to do substantive research and writing. Within two months of starting, I had co-authored a piece on Russia’s cyber strategy published by an Italian think tank and was supporting a high-profile working group of experts on encryption policy.

Despite the small size of our team, we punch above our weight. Carnegie’s global reputation and high quality of experts means that when we want to get in contact with someone in government, they listen to what we have to say. For me, it was incredibly impactful to work for the scholars in the Cyber Policy Initiative and Nuclear Policy Program. As experts in the field, they have been invaluable as mentors, co-authors, and guides to the often obscure subtleties of Washington policymaking.

But it was been the others in my cohort of Junior Fellows who have most impressed me. Beyond being extremely well-versed in their subject areas, all other 11 fellows were some of the kindest and most enjoyable people to go through this fellowship with. Carnegie as an institution values the Junior Fellows program and organizes a number of internal and outside speakers, trainings, and outings for the fellows. I’ve never had as illuminating lunch conversations as when we all chatted about civil conflict, gender, and great power war in Carnegie’s library. These experiences, plus the task of planning a conference together, brought us closer together. At the end of our fellowship year, we dispersed around the globe – with some studying in London and Paris while others began graduate school in the US and others started new exciting professional opportunities.

My year as a Junior Fellow led to some extremely exciting experiences – from assisting with a high-level meeting at the United Nations to traveling to the UK to put on a conference on cybersecurity and the financial sector. I’ve also had opportunities to pursue my own research – some of which has culminated in forthcoming publications and conference presentations. Yet most of all, I’ve had the opportunity to see a number of different career paths – from working in government to pursuing scholarly work in academia to business – and figure out my path and my interests.

Carnegie has been a home to me even as my interests evolved, from initially focusing on international law and cyber conflict to now focusing on emerging technologies and strategic stability. The problems I got the chance to work on here are going to be critical for international peace in the next few years. I’m so glad that I had the opportunity to learn from the scholars at Carnegie through the Junior Fellowship, and now have continued on at Carnegie as a research assistant to continue exploring these issues while I explore my options for graduate study. Through this year, I gained invaluable professional experience working with high-level experts and practitioners, pursued my own research, and made lasting friendships. I encourage any Georgetown student interested in foreign policymaking to consider this fellowship. 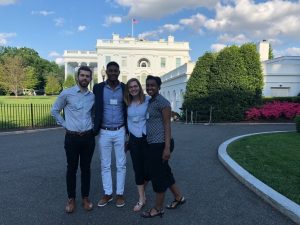 Garrett standing in front of the White House with three other Carnegie Junior Fellows.