You know you have lived in New Delhi for a year when you are accustomed to Delhi Belly and all of its gastronomical unpleasantries. For me, the last bout of it occurred when, out of dire thirst from walking around in the scorching heat, I decided to drink “pineapple” juice from a local “raswala” (juice man). The color of the drink, which I had seen him make, was red, not yellow as is typical of pineapple juice. But, I did not care; I needed something refreshing. After drinking half the cup, I realized right then that I would pay for that decision. Luckily, however, I had gotten Delhi Belly before, so I was well prepared to handle it. Ultimately, this experience typifies a LUCE year, one in which the scholars learn how to adapt to and immerse themselves into a new cultural environment.

I applied to the Henry Luce Scholars Program as a post-Obama Administration job.  As a political appointee, you always realize that your time in the U.S. government has an end date. For each presidential administration when your party is in power, you usually serve maximum anywhere between 4 and 8 years. Even if Secretary Clinton had won the 2016 Presidential Election, there was no guarantee that I would be asked to stay. I needed a backup plan.

This fellowship appealed to me because I saw it as an unconventional job that allowed me to break out of the D.C. bubble. Throughout college and the first two and half years of my career, I had only known one thing: public service in the U.S. government. Adding the fact that I had grown up in the D.C. area, having gone to Gonzaga College High School and Georgetown University, a temporary separation from my relationship with the Nation’s Capital seemed appropriate. And, with a fellowship whose criteria for eligibility includes having limited or no prior familiarity with Asia, the Henry Luce Scholars Program was perfect for me.

The yearlong Henry Luce Scholars Program is unique within the fellowship world. I see it as a combination of the Fulbright Scholarship and the Princeton in Asia (PIA) Fellowship. On the one hand, its scholars are afforded exciting professional opportunities in the Asia as they are matched with organizations directly tied to their academic field of interest. On the other hand, the Asia Foundation, the in-country support to the Henry Luce Foundation for this program, offers language stipends to ensure scholars are best positioned to fully assimilate into the culture of their placement country. Similar to those of both the Fulbright and PIA, the LUCE cohort comprises of a diverse group of individuals, whose ages ranged from 21 to 29, whose colleges included Emory and Rice as well as Yale, and whose interests varied from environmental science to journalism. 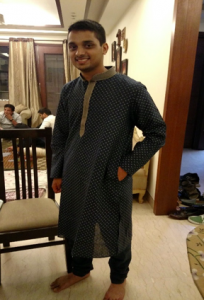 Neil in kurta, celebrating Diwali at a friend’s place.

As I reflect back on my time in New Delhi, I relish how much I grew over the year. Academically, I can now speak intelligibly about Indian domestic politics and foreign policy agenda. When I arrived in the country 14 months ago, I knew nothing about the country from those perspectives. Professionally, I learned how to operate within the think tank space and released three publications, one of which later culminated into a roundtable discussion. Personally, I became resilient, developing the ability to weather challenges that come from living abroad, such as not being able to celebrate Thanksgiving or other momentous occasions with your family and friends back in the U.S.

Most importantly, I connected with my ethnic heritage, developing stronger cultural and linguistic ties with Indian society. Before my LUCE year, I knew only one Bollywood film, the importance of only two actors, and two phrases in Hindi (tum pagal ho and tum bakari ho; “you are mad” and “you are a goat”). Over the course of the year, I watched roughly 6-10 Hindi films, learned about more Bollywood stars, including an actress with whose husband I played basketball consistently, and talked to my parents intermittently in Hindi. While I don’t think this fellowship has lit a fire in my heart to become a South Asian regional expert, it has made gain a greater appreciation for the country from which my parents emigrated in the 1980s.

I really wished that more students at Georgetown University knew about the Henry Luce Scholars Program. It is not just for the SFSers like myself. All majors and professional interests are welcomed. In fact, this year’s LUCE cohort includes a metalsmith. At the same time, I realize that now as an alumnus, I have an obligation to be like a televangelist and convince other students and alumni to apply for this opportunity. The Henry Luce Scholars Program changed my life and I am sure it will do the same from you (See I could be the next Joel Osteen). You certainly won’t regret it—even if your stomach does!

Neil Noronha graduated from Georgetown University School of Foreign Service both with his BSFS in International Economics (’14) and his MA in Security Studies (’16). At Georgetown, he was a member of the Georgetown University Student Association and Carroll Fellows Initiative. He also participated in numerous internships, to include working at the FBI, U.S. Embassy in Panama for the Department of State, Treasury Department, White House, and Goldman Sachs.  Neil spent two and half years in the Obama Administration, both at the Department of Defense and on the National Security Council Staff before spending the 2017-18 academic year in New Delhi, India, working for Carnegie India and studying Hindi as part of the Henry Luce Scholars Program. Currently, he serves as a congressional fellow with the Asian Pacific American Institute for Congressional Studies, covering foreign policy and defense issues in the role of a legislative assistant for Senator Tammy Duckworth (D-IL).