A Reflection on the Mitchell Scholarship

A reflection from Peter Prindiville (SFS ’14), who is currently pursuing a master’s degree in Ireland on a George Mitchell Scholarship:

I graduated from the School of Foreign Service in 2014. After teaching high school for two years and earning a master’s degree from Notre Dame, I moved to Ireland to pursue further graduate studies on a George Mitchell Scholarship.

I am working on an MA in history at University College Cork, one of the constituent campuses of the National University of Ireland. The fellowship, as well as graduate education in Ireland, provides a considerable degree of flexibility and freedom. Simply put, I’ve been able to make the year what I wanted it to be. This freedom has made my time in Ireland quite fulfilling and formative, both professionally and personally, and is a hallmark of the Mitchell. The fellowship is intended to create an environment in which the recipients can grow personally while also making connections with and developing a love for the island of Ireland.
This broad mission and the myriad ways it is interpreted and lived out by different Mitchells allows for an experience somewhat unique among fellowships on the isles. Some of my fellow Mitchells have spent their time writing plays, working on business plans, or making doctoral applications. I’ve spent most of my time reading, writing, and traveling. Despite our different paths, we’ve each developed close, personal bonds to the island that will endure long after we leave.
Engaging this place on such an intimate level has been another gift of the year. The island is a beautiful and complex place. Living amidst the Irish milieu has encouraged me to confront challenging issues inherent to the Irish context—mores of belonging and community in a rapidly changing society, efforts to work for justice and equality informed by a national history replete with systemic oppression, and the duties a state has to its young people—that have helped me reflect critically on my own beliefs as an American.
The last thought I’ll leave with you can be summed in a simple Irish phrase: craic. It has a broad range of meaning, from “fun” or “good conversation” to “what’s happening?” In each of its uses, though, craic expresses a foundational cultural custom: the Irish are super chill. To sit for two hours in conversation with a friend down at the local pub over a pint of Murphy’s or Guinness isn’t lost time and it doesn’t need to be planned on Facebook—it’s friendship and it should happen on a whim. Things will get done, but maybe not in the next ten minutes. Business hours are broadly defined. The schedule is often not quite helpful in determining when a bus will actually arrive—or the national bus system just shuts down for almost three weeks and few people seem to care.
Things move at a different pace here. The Washingtonian in me was frustrated by all this at first. Nine months of slow acculturation, however, have encouraged me to take a step back, chill out a bit, and enjoy some good craic. For that, I’m quite grateful.
Read more about Peter’s Mitchell story here 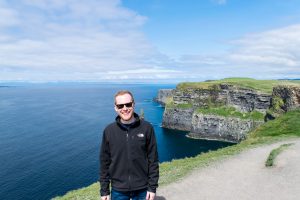