Devika Ranjan (SFS’17), a culture and politics major at Georgetown, has won a 2017 Marshall Scholarship for graduate study in the United Kingdom. Devika, a local of Andover, Massachusetts, plans to pursue a one-year master’s degree in Refugee and Forced Migration at the University of Oxford and pursue a second one-year master’s degree in Devised Theater. As an undergraduate, Devika has engaged in many efforts to work with marginalized communities, including choreographing a political satire with a Pakistan-based theater and facilitating a theater workshop for children’s trauma relief after last year’s earthquake in Nepal. Read more of Devika’s story here. 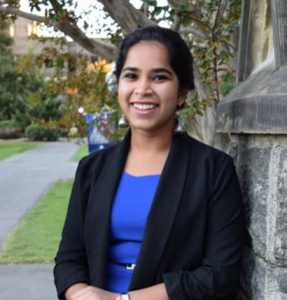