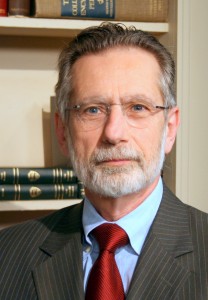 Born in the Bronx, New York, Frank Ambrosio graduated from Regis High School in Manhattan and received a B.A. in Literature and Philosophy from Fordham University, where he was elected a member of Phi Beta Kappa. After studies in Italian language and literature in Florence, Italy, he completed his doctoral degree at Fordham University with a specialization in contemporary European Philosophy and a dissertation on H-G. Gadamer’s hermeneutics. He worked as Assistant to the President and Director of Institutional Planning at St. Joseph’s University, Philadelphia.

Currently he serves as Director of the Doctoral Program in Liberal Studies. He is a member of the faculty of the Department of Philosophy of Georgetown University, where he holds the rank of Associate Professor. He teaches courses at Georgetown on Existentialism, Postmodernism, Plato, Dante, Gadamer, and Derrida. He has published widely in scholarly journals, writing on hermeneutics, especially the work of Gadamer. In addition, he is the editor of two books, Text and Teaching (with Michael J. Collins, Georgetown University Press, 1986) and The Question of Christian Philosophy Today (Fordham University Press, 2000).His most recent book is Dante and Derrida: Face to Face, (State University of New York Press, 2007).

In 1994, he was the convener of a major academic gathering at Georgetown University, entitled “The Question of Christian Philosophy Today: An International Symposium,” It attracted over 140 attendees from more than 30 institutions. Subsequently he edited and published the symposium papers, with an Introduction and contributed essay.

In 2000, he founded the “MyDante” Project at Georgetown University, which has been widely recognized as one of the most innovative and effective educational websites currently available in the field of humanities. More than just a technology, “My Dante” offers pedagogy of reading and reflection designed to illuminate and document the reader’s experience of the poem’s meaning. Dante wrote the Commedia as an invitation to undertake a journey of self-discovery. “My Dante” serves as a permanent memorial and record of having accepted that invitation and shared Dante’s journey,  helping to make the poem profoundly personal. https://dante.georgetown.edu

In 2009, The Teaching Company released his course, “Philosophy, Religion and the Meaning of Life,” a series of 36 half-hour lectures which he created for the “Great Courses” series.

In collaboration with Deborah Warin, former Director of Continuing Education at Georgetown University and Director of Credit programs at the American Council on Education, he co-directs The Renaissance Company, leading study programs focusing on the development of the Italian Renaissance. His study of the painting of Fra Angelico appears in The Question of Christian Philosophy Today.