Audience anyone and everyone interested in learning about a fascinating facet of D.C.’s history and the music scene that epitomized the DIY punk culture of the 1980s.

I want to create an ongoing timeline of the music punk scene during the 80s on a web platform that will allow for my representations to include the timeline of events as well as audio and video clips from the music scene.

Sound will be a major component of my project and the key to a successful representation, after all the punk scene was centered around music. We have yet to explore much about sound in the context of cities but it will be interesting to think about how sound creates feeling in a city–whether that be sirens, people, honking cars or in this case, music.

A major component of my project will be relating the underground D.C. punk scene back to the national view of the Washington D.C. during that time. I plan to accomplish this using newspapers and photographs of the “city of fact.” As we’ve discussed in class the source and time of the representations plays a major role in the way things are represented. It is of the utmost importance in my project to give the viewer a clear grasp of the city of Washington DC during the 1980s. Along these lines, I want to give the viewer full knowledge of the “narrator,” or in this case the songwriters for the different D.C. punk bands. Punk rockers were predominantly white (and upper-class). But bands like Bad Brains and even the emerging gogo movement at the end of the decade integrated the youth in a city of low interaction.

I think Nandini made a great point about a city’s interactions a few class sections ago. She illustrated it well when she described the white young-professionals doing yoga at the park while the Hispanic and black families were at the pool five meters away. Both groups, though near one another did not interact nor acknowledge one another.

Punk Rock had a brief intersection with GoGo which provided an outlet for the cities youth of diverse background to interact. How can music and youth movements transcend the cities distinctly isolated social-groups?

City of fact—What did the city look like at that time? Especially after seeing Detropia and reading the Novel in Pictures, I want to include pictures in my representation. I want to particularly focus on the contrast of D.C. right after the riots of 1968***, the pop up of music venues on those streets, and how Street like U street look now. Watching the evolution of the city of fact will be an important part of my project, which focuses primarily on music and feeling in a city.

city of fact: architecture (via photographs) of city in distinct periods of it’s evolution riots of 1968, punk rock of the 1980s and now, newspapers– what was the city of 1980s (high crime/ cocaine)

who is the narrator? punk rockers are white/young but they mix in with the young-black youth (GoGo)

***some streets of D.C. never recovered from these riots leaving areas of D.C. empty, prime real-estate for underground music venues and teenagers looking to make the city theirs

City of Power (how the city affected them)

-D.C. is known for power, it is known for changemakers the punk rock youth incorporated some of these mentalities when they used their love for noise as a means of protesting (Apartheid in front of South African embassy)

-they also exhibited this D.C. empowered mentality when they pushed back against the “drunk punks” who were corrupting the music scene with violence and drugs. Just like the city police of the time were pushing back on D.C. as city of crime and murder.

The Start to my Project

Below are a few clippings and interesting things I’ve learned about the D.C. Punk movement that I want to share with this project as I create a timeline/blog like platform comparing the city and youth culture I see now with the DIY mentality of the punk rock movement. 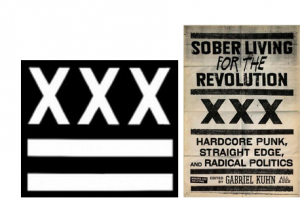 When I saw the cover of the album I immediately thought to Professor Pavesich’s flag adaptations project.

Above are a few examples of representations from the straight edge movement started by a song sung by Ian MAcKaye of Minor Threat. Many of the punk bands were young teens under the drinking age so often they were not allowed into music venues because of the drinking age restrictions. To combat this groups of young punks asked to be allowed in if they marked X’s on their hands to show that they shouldn’t be served. Straight-edge was a radical pushback against  the city that treated punks as drug users and alcoholics. 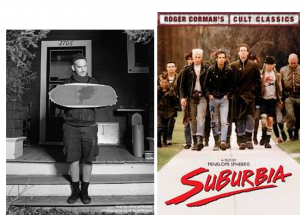 The use of abandoned space for creative outlets again reminded me of the DIY post-capitalist mentality featured briefly in Detropia.

Pictured above is Brian McKaye at the Dischord Records house. During the release of Minor Disturbance by Minor threat the teenagers used this house to produce cheap records. The DIY mentality was a major theme throughout the punk movement. Through this house they produced the records on their own and sold them at discounted prices.

A 1980s film suburbia depicts a similar idea of young teen punks living in an abandoned house and working on and listening to music. 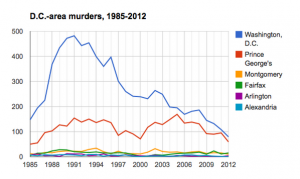 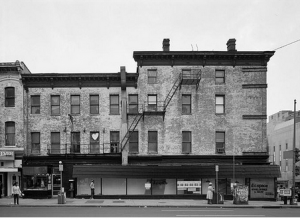 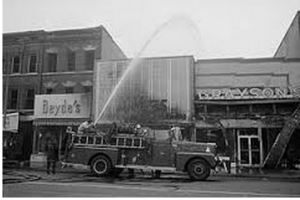 Repeater (song about crack epidemic) “ Did you hear something outside/It sounded like a gun/Stay away from that window/It’s not anyone/We know….”

The DC of the 80s was a crime-ridden city. Though filled with government workers by day the city emptied out at night, particularly because of the high crime rates (in part, due to the widespread crack/cocaine problem of that time). Some parts of D.C. never recovered after the riots in 1968. These streets were the venues of the D.C. punk scene. The punks had the city to themselves at night and they reveled in the danger and adventure of it. This mentality reminded me of the way the youth in Detropia used Detroit as their hub of creativity even the way the Uwe at SCS is talking about creative communities. The punks were creating something vibrant and distinctly D.C. in the height of crime and city desolation. Something along the lines of the post-capitalist DIY mentality.

Some of the bands during the punk movement began to use their concerts for good. Particularly as the issue with Apartheid occurred in South Africa the punks famously took part in percussion protests in front of the south african embassy.

The 9 30 club (then and now) –A major venue and hub of the punk scene in a once forgotten neighborhood. 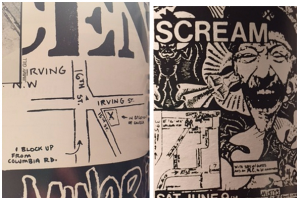 Throughout this project I want to create a space distinctly for the d.c. punk movement. There are a ton of documentaries and a few photo novels about the punk movement but none that use a web timeline to depict the evolution and impact of punk rock.  I want to focus in on the neighborhoods bands played in, record covers they used and song lyrics they sang that depicted life in 1980s Washington D.C..