For anyone who begins the task of reading Middlemarch, it almost immediately becomes a web of complicated, interweaving relationships. It occurs to a reader to attempt to make sense of them, and just as quickly it becomes clear how difficult that might be. In class, we decided to try and map out characters and their relationships in an impromptu fashion. The in-class exercise that we conducted showed how complicated mapping the novel would be.

Within this project, our Digital Middlemarch group decided to take on this potential over-simplification of a great novel. By brainstorming, we only discovered more limitations which the necessary objectivity would require.

We started at a very basic level by simply picking out every interaction we could find in the book. With these seemingly simple instructions, we already ran into a few problems. What “counts” as an interaction? Which interactions are more important than others? How would we represent those differences?

It then seemed most logical for us to investigate the potential of our technological tools and move forward based on their affordances and limitations. Mapping programs of varying complexity are available, but a somewhat familiar and relatively easy-to-use software was chosen: Gephi.

This program allows us to spatially graph the multitude of connections between characters in the novel’s social network. We were able to manipulate node sizes, the spectrum of node colors, edge thickness, and distances to represent the social network in a comprehensive visual object. Various analytic measures and features of the program allowed us to explore how to best determine a representative model that could highlight factors important to social relationships and centrality of core characters in the novel.

We then tackled the problem of how to denote different types of relationships or different strengths of relationships. Given Gephi’s relative simplicity, color-coding relationships by type wouldn’t be possible. However, the program does allow us to change the thickness of lines connecting the characters. Our next task was to then determine an objective numerical/mathematical way of determining the strength of relationships.

The map wouldn’t be an accurate representation of the relationships that a reader can divulge from gaining a better understanding of the characters. Subtleties, for example, in personal interactions wouldn’t come through in an objective analysis. This is the key component of our project: we highlight the deficiencies of such a digital endeavor while simultaneously providing clarity on the significant relationships of the novel. 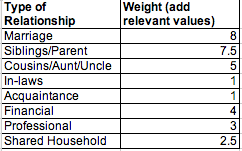 The first step in the actual process of creating a map was establishing nodes for each character, and then the size of each node based on how often each character appeared. This was done using the Kindle E-book’s searchable text and the online text version of the book.

The book was divided into equal sections by page number to scan for relationships. Those relationships were then re-distributed equally and analyzed. They were categorized according to their types, and assigned values as mentioned in the above table.

Due to the vast difference between characters in how many times they were mentioned in the novel, the node sizes would be extremely disproportionate. For this reason, the node sizes were fit onto a logarithmic curve function to bring the nodes to more appropriate sizes, yet maintaining the relative differences in size.

The next step was to display the edge thickness by the value determined by our weighted formula. The edges were ranked by weight so that the “stronger” connections were made more thick and solid, while the “weaker” connections between character nodes appeared thin and dashed from a distance.

Taking advantage of the statistical metrics available on Gephi, we ran analyses of closeness centrality which determined metrics for each node according to how many ties and the relative centrality of the other nodes to which it is tied. Using the ranking feature, the color of the nodes were determined on a gradient from the closeness centrality metrics such that the most “central” nodes were given a deep red to the most “marginal” nodes which were given a deep blue color.

Finally, the layout feature allowed us to expand the model to its current form according to algorithms incorporating the edge weights and ties to other nodes. The model now has the nodes and edges arranged in a way that highlights core nodes versus peripheral nodes, with closely tied characters clustered together.

There were some limitations to the program that limited our ideas of what factors we wanted to include in the model. For example, we would have liked to have experimented with including multiple connections between two characters to represent different types of relationships, but this feature is not possible on the program. Other statistical metrics and layout parameters could have been utilized as well to produce slightly or possibly vastly different models that our final output.