Source: ” ‘However, I am telling you of my fruit dinner in the distant future now. So soon as my appetite was a little checked, I determined to make a resolute attempt to learn the speech of these new men of mine. Clearly that was the next thing to do. The fruits seemed a convenient thing to begin upon, and holding one of these up I began a series of interrogative sounds and gestures. I had some considerable difficulty in conveying my meaning. At first my efforts met with a stare of surprise or inextinguishable laughter, but presently a fair haired little creature seemed to grasp my intention and repeated a name. They had to chatter and explain the business at great length to each other, and my first attempts to make the exquisite little sounds of their language caused an immense amount of amusement. However, I felt like a schoolmaster amidst children, and persisted, and presently I had a score of noun substantives at least at my command and then I got to demonstrative pronouns, and even the verb “to eat”. But it was slow work, and the little people soon tired and wanted to get away from my interrogations, so I determined rather of necessity, to let them give their lessons in little doses when they felt inclined. And very little doses I found they were before long, for I never met people more indolent or more easily fatigued.” (27-28) 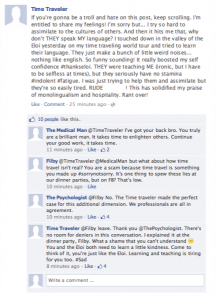 I chose to translate one of the Time Traveler’s early interpretations of the future into a Facebook rant. Throughout the novel, I found the Time was often passive aggressive, and at few times outright agressive. This gave me the inspiration to make him into the archetypal complainer of the digital age.

Therefore, the Time Traveler loses his dimensionality in this new medium. The ironic element is that popular culture would have you think that the modern age social media enables people to be more ‘hipster’ and ‘throw shade’ more eloquently. However, technology works retroactively in this instance. The passage from the book poignantly ‘throws shade’ at the Eloi in a way that a Facebook rant could never amount to.

The overall style of the novel allows for the time traveler’s sly ways. Whereas a Facebook rant has essentially no build-up, the overall style of the novel allows for argumentative progression. In the beginning of the passage, the time traveler describes the fruit and his observations of the Eloi. Facebook rants typically do not give due merit to the specifics of a situation; rather, the feelings that arise from that situation are the centerpiece. Additionally, these novelistic descriptions come off very stoic and detached. A Facebook rant, on the other hand, is extremely egocentric: ‘I’, ‘my’, and ‘me’ are frequently present.

Delving further, the tone of a novel makes a speaker’s insults all the more vicious. The haughty tone of the passage means that the Time Traveler never outright says that he thinks the Eloi lesser than him. Rather, the reader has to look further and analyze the subtle insulting language. Although there are different shades of implicitness, the Time Traveler of the novel is never as direct in his insults as a Facebook ranter would be. In one of his more direct insults, the Time Traveler “felt like a schoolmaster amidst children” during his linguistic attempts. Most of his insults are not even this direct, but to show that none compare to the directness of a Facebook rant, this simile makes a reader analyze the connotation of ‘schoolmaster’ and ‘children’. Finally, one can put together that this time traveler is really awfully mean, as he belittles his hosts. I couldn’t capture this high-minded tone in the Facebook rant.

In layman’s, the novel is more suited for any situation looking to make a truly low insult. In our own lives, we know it hurts more when someone crafts a well-thought out argument against us, free from explicit language. Calling someone a mean name is cheap. Hitting them with a wittily nasty simile is maniacal.