“Prince required but slight attention, lacking energy for superfluous movements of any sort. With no longer a companion to distract her, Tess fell more deeply into reverie than ever, her back leaning against the hives” (32)

“As all visitors to the mansion are aware, these paintings represent women of middle age, of a date some two hundred years ago, whose lineaments once seen can never be forgotten. The long pointed features, narrow eye, and smirk of the one, so suggestive of merciless treachery…haunt the beholder afterwards in his dreams” (217).

I chose to translate these two passages from Tess of the D’Urbervilles into sketches. You know that feeling when a book you love is made into a movie, and you realize the actor playing the main character looks…wrong? I am interested in what the reader brings to the novel, and how everyone imagines characters differently although we are all given the same descriptions. Upon examining the original illustrations from Tess in the back of the book, I was disappointed to find that those depictions looked nothing like how I envisioned the characters. I decided to create my own versions of two of the faces featured in Tess- Tess’s own and the portrait of the D’Urberville woman hanging in her ancestral mansion. 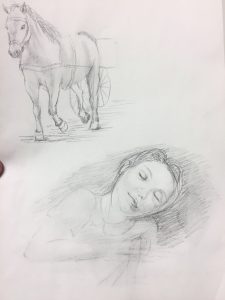 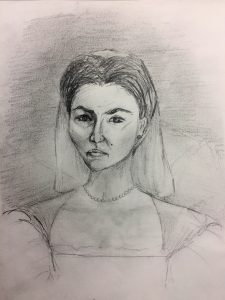 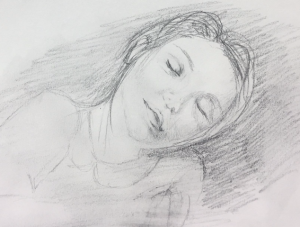 Counter to the old cliché, I actually think a sentence is worth a thousand images. Although an image is able to convey more specific information than words can, it also limits the power of the viewer’s imagination in some ways. Every single person in our class probably envisioned Tess’s face differently based on the words used to describe her, and my selection of one of the infinite possibilities for what she could look like in this particular scene cuts off the possibility for the reader creating their own version of Tess. Perhaps the D’Urberville woman is more terrifying in prose than in picture; can an actual portrait of a middle-aged woman have the power to “haunt the beholder afterwards in his dreams”? It seems to me that the power of description lies in its incompleteness; the reader has to fill in the gaps with pieces from his or her own psyche. This mystery inevitably leads to a more powerful effect on readers, because they project their own selves onto the thing they are imagining. In my opinion, an image can only have this effect when it provokes the reader into partaking in the same process- for example, Cézanne’s cubist interpretation of a field and a mountain is more interesting to me than a photo of that same field and mountain because it challenges my brain to fill in, to interpret.