Source Text: The scene I chose is in the seventh Harry Potter novel (Harry Potter and the Deathly Hallows) where Harry is confronted by Lord Voldemort in the woods and then at Hogwarts castle. Harry sacrifices himself by letting Lord Voledmort kill him, but in doing so Lord Voldemort actually ends up killing the horcrux (part of Voldemort’s soul) that was inside of Harry. Harry is then able to defeat Lord Voldemort and grows older with his two best friends, Ron and Hermione. 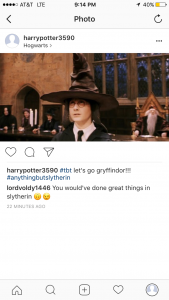 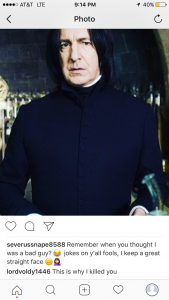 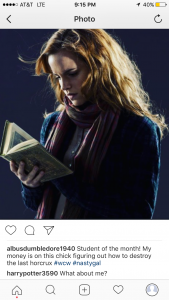 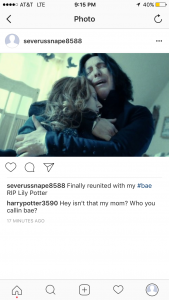 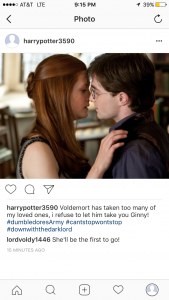 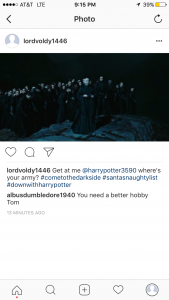 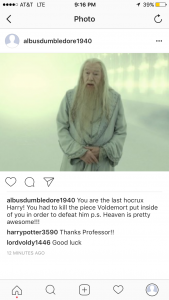 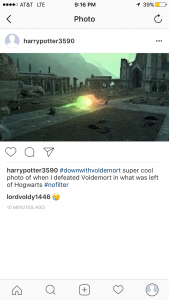 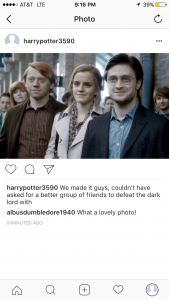 I decided to use Instagram as my destination medium because it is the form of social media that I interact with the most on a daily basis. The source text that I chose was the ending scene in the final book of the Harry Potter series, which I attempted to remediate through Instagram photo posts. I created four separate Instagram accounts: @lordvoldy1446, @harrypotter3590, @severussnape8588, and @albusdumbledore1940 to represent Lord Voldemort, Harry Potter, Severus Snape and Albus Dumbledore respectively.

The interface of Instagram is useful in a social context because it allows users to interact with (like and comment) each other’s posts. I attempted to recreate hypothetical reactions between each character’s posts by having the various accounts comment on each other’s pictures. I first chose the photos that I wanted to use to represent each character, then ordered them in the way in which I wanted a potential user to scroll through them on their news feed, and then wrote the various captions to describe each post.

What is useful about Instagram is that you are able to convey your ideas with a photo, caption and location. The caption character limit much larger than Twitter, allowing users to write lengthy posts describing their photos if they wish. I found this useful when attempting to recreate the fight scene between Harry and Lord Voldemort, because I had space to describe each photo’s relevance and still have room to include hashtags. Hashtags are a way on Instagram to link your photos by a word or phrase to other users photos that have used the same word or phrase to describe their post. When deciding on which medium to translate the scene into, I thought that Instagram would offer a more robust way of expressing Harry, Voldemort, Severus and Albus’s interactions than if I had hypothetically used Twitter or a text conversation with a single character. Compared with texting directly with one person, Instagram had a way for this community of people to interact with each other in a public, modern forum.

A possible concern with Instagram is the way in which users typically consume this media form. A major critique of Instagram is that it’s users only utilize the application to showcase the highlights of their everyday experiences on their feeds, creating a skewed perception of their reality to the external world. Also, I think that part of the magic of the Harry Potter novels is the flow of J.K. Rowling’s narration, which is definitely lost in the translation to Instagram posts. For example, a novel is able to elaborately detail the setting of a scene, whereas on Instagram you are only able to attach the name of the location where you are at the top of your post. In the scene I chose to recreate, I was only able to include “Hogwarts” as the location of the first photo, leaving the reader without any further description of the castle beyond the photo of its eventual destruction. Even though the pictures on the various Instagram accounts offer visual depictions of the events that the novel did not have, some may argue that the photos restrict the users ability to imagine and interpret a scene. Many times I have watched a movie after reading the novel it was based off of and have left dissatisfied because I thought that someone who was cast did not fit the way I had imagined him or her while I was reading the story. In a way these Instagram posts limit the way a user can create the magical, fantasy world within their mind while reading the novel version of the Harry Potter series. After completing this assignment, I can soundly say that I would personally prefer to read J.K. Rowling’s version of the Harry Potter series. (But if J.K. Rowling were to create Instagram accounts for the Harry Potter cast I would definitely follow them :). )