“Please just tell your mother,” he said, in emphatic tones. “It is her business to judge—not yours. I shall get the house swept out and whitened to-morrow morning, and fires lit; and it will be dry by the evening, so that you can come straight there. Now mind, I shall expect you.”

Tess again shook her head, her throat swelling with complicated emotion. She could not look up at d’Urberville.

“I owe you something for the past, you know,” he resumed. “And you cured me, too, of that craze; so I am glad—“

“I am glad of this opportunity of repaying you a little. To-morrow I shall expect to hear your mother’s goods unloading… Give me your hand on it now—dear, beautiful Tess!”

With the last sentence he had dropped his voice to a murmur, and put his hand in at the half-open casement. With stormy eyes she pulled the stay-bar quickly, and, in doing so, caught his arm between the casement and the stone mullion.

“Damnation—you are very cruel!” he said, snatching out his arm. “No, no!—I know you didn’t do it on purpose. Well I shall expect you, or your mother and children at least.”

“I shall not come—I have plenty of money!” she cried. 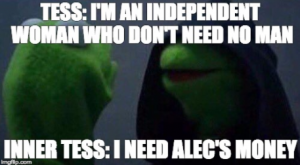 Throughout Tess, the reader is rarely privy to Tess’ inner turmoil and indecision. Her choices oftentimes seem random and without preamble. To expand on this incongruity, I remediated this particular conversation; it exemplifies the disconnect between Tess’ outer and inner dialogue. Without any insight into her apparent conversion, Tess chooses to become Alec’s mistress shortly after this exchange. Therefore, I think that the Kermit the Frog “Me v. Inner Me” meme aptly describes Tess’ vacillation between self-respect and comfort while also showing that her decision to accept Alec’s offer is not simply a tragic plot development, but a relatable moment of confusion and inner turmoil.

Tess is written in third person, making it difficult to perceive the discrepancies between Tess’ genuine emotions and her actions. Rather, this narrative structure promotes a sense of detachment between Tess and the readers. It does not allow insight into her actual feelings of uncertainty. For example, in this excerpt, the only clue of her indecisiveness is the easily overlooked term “complicated emotion.” Thus, her inner turmoil remains largely undisclosed in the third person narrative. Without a direct account of her inner struggle, Tess’ difficult decision seems abrupt, and we, as readers, are largely unsympathetic to her inner conflict.

The purpose of memes, on the other hand, is to combine picture and text to portray a relatable struggle. The Kermit Meme is meant to show how one’s outer self and inner self are often in contention with each other—a familiar concept for Tess. The meme format uses humor to represent every-day problems in an accessible and relevant way. To ensure that the reader/viewer can identify with the situation, most memes use first person pronouns. Although my version of this meme does not follow this pattern, it evokes a similar level of sympathy in its structure and format as it allows me to focus entirely on Tess’ emotional state.

By remediating Tess’ conversation with Alec and her decision to live with him into a comedic meme, I gained insight into Tess’ character. I realized that her unfortunate decision is not as unfamiliar as I had originally thought. Rather, as I attempted to make this tragic turning point in the novel a humorous moment of indecision, I saw the commonalities between her choice and the difficult decisions we all face. The meme allowed me to make this connection as I tried to elucidate the relatable aspects of Tess’ struggle between independence and the want of money/comfort. It is impossible to portray all the complexities of her situation in meme format, so I focused on the elements that are still relevant and humorous to the modern-day reader.

This remediation exercise demonstrated how novels written in the third person sometimes fail to evoke sympathy, prioritizing intricate plots over deep, relatable characters. Tess’ inner struggle is implied, but her emotions are rarely revealed, making it difficult to identify with her. Although I think this remediation provokes a more sympathetic reading of Tess, I also recognize a significant loss in its meaning. Unlike the novel, the Kermit Meme focuses solely on Tess’ feelings—neglecting to capture the characters’ body language, their combative dialogue, or the subtler cues of Tess’ emotional state. The meme format offers a stark contrast to the traditional 19th century novel form in its myopic focus, yet it has the unique capacity to portray relatable emotional conflict.