Posted on December 5, 2016 by Charlotte Phillips 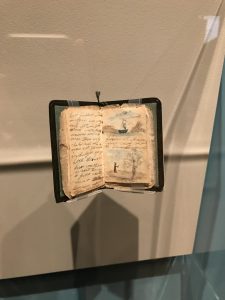 An early Brontë work- By Charlotte, written for and about sister Anne, featuring their dying mother.

Reading Gaskell, as well as the introduction to Jane Eyre impressed upon me the importance of family as inspiration for Charlotte’s writing. Seeing the exhibit provided primary source evidence for this dedication to family. Charlotte wrote (and illustrated) the book above for her sister when she was in her early teens. The story features Anne going on an adventure, only to return home in the end to be with her dying mother.

Just as Charlotte and her siblings, especially Branwell, wrote the Juvenilia to entertain each other and were inspired by each other, seeing Charlotte’s correspondence made it explicitly clear that Charlotte based Jane Eyre on parts of her own life. In a letter in the exhibit, Charlotte addresses the claim that Helen Burns was too good to be true. She explains in her letter that Helen is based on her dead sister Maria, who died while at school, and who in fact was so saintly that Charlotte omitted certain facts of her goodness in order to keep the story believable. Understanding how much of Jane Eyre is biographical and how Charlotte’s creative impulse was tied to her family was fascinating.