Posted on November 28, 2016 by Gretchen McCarthy

Above is a picture of one of the many minu 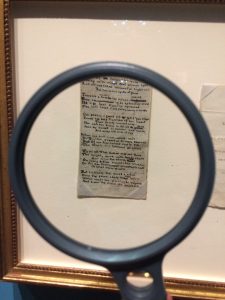 scule books and poems created by the Brontë siblings. At the exhibit they had magnifying glasses available so that you could read the text written in miniature handwriting on the little pieces of paper. This need for a magnifying tool in order to understand the work in a museum is incredibly unique and an experience that showed the uncommon nature of much of the Brontë’s early works. I found the information about how the Brontë’s wrote during their childhoods especially fascinating because there was clearly a lot of thought and reasoning behind all of their decisions. In one of the pieces of the exhibit the role that toys and games had in the Bronte’s lives was described. After their father brought home a set of toy soldiers, Charlotte, Branwell, Anne and Emily, created entire imaginary worlds and lives for their new toys. Charlotte and Branwell imagined the kingdom of Angria, and Emily and Anne created the realm of Gondal. Both of these new worlds were written about in many stories and poems, all in the unique small books and handwritings the Brontë’s are known for. These small stories fit perfectly into the world inhabited by the toys, remaining proportional to the size of the toys and separate from the reality of the world belonging to the Brontë’s. I found this incredible scope for imagination and creation an especially interesting part of the exhibit because it shows that the nature of all of the Brontës, not just Charlotte, was to build new and exciting worlds and stories. The fact that Charlotte started imagining things like these when she was twelve is a clear precursor to the many different settings and worlds she creates throughout the story of Jane Eyre.