The library has assembled a small number of children’s books for patrons looking for a quiet retreat with their children in the EB Williams Library. The books are generally geared towards the preschool and elementary set, but we also have a few graphic novels and nonfiction books discussing the law for older children. The books will be housed in the Student Lounge (Williams 320).

Georgetown Law Library Special Collections is pleased to announce two new exhibits featuring rare books from our collections. The first is our own exhibit, Magna Carta, Sir Edward Coke, and the Rule of Law at the Dawn of American Settlement. This exhibit is located in the Special Collections exhibit case outside Room 210 in the Williams Law Library. The exhibit features 5 imprints of Magna Carta cum Statutis tum antiquis tum recentibus, the leading compilation of English statutes from the reigns of Elizabeth I and James VI & I, that were annotated in law French by their owners. It also includes images from Sir Edward Coke’s personal annotated copy of Bracton, the landmark treatise of English law written shortly after the authoritative 1225 version of Magna Carta was issued by Henry III. Full text images of all of the featured books are available through Digital Georgetown.

The second exhibit is Age of Lawyers: The Roots of American Law in Shakespeare’s Britain at the Folger Shakespeare Library. This exhibit features our copy of Coke’s Bracton and our set of 17th century imprints of Parts 1 through 12 of Coke’s case reports, which were so highly esteemed that they quickly became known simply as The Reports; as well as many other rare books and manuscripts from the Folger’s collections.

For further information about these two exhibits, please contact us at specl@law.georgetown.edu.

The Pharos printing system will be undergoing an upgrade today. During this upgrade individual printers will be unavailable at times during the day. There will be signage to direct you to operational print stations. Between noon and 1:00pm will likely be the biggest disruption as the new software is activated. If you need any printing assistance please visit the circulation desk in either the Williams or Wolff Library. 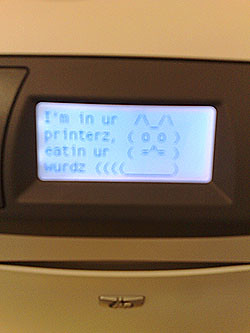 GULLiver, the library catalog, may be unavailable for about 30 minutes to two hours some time between 8 a.m. and 2 p.m. on Sunday, August 16. Information Systems Technology (IST) is doing network upgrades. The rest of the Georgetown Law Library website will be unaffected.

Due to the scheduled electrical work on the Law Center buildings, the Wolff & Williams Libraries will both be closing at 10pm on July 29th, 30th & 31st.

The Circulation desks will remain on their normal summer hours. 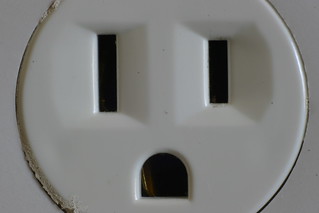 Williams Library schedule:
Every day  –  7am to 2am daily

The extended hours will end at closing on Monday July 27th, 2am for Williams and midnight for Wolff.

Both Williams and Wolff will resume normal summer hours on opening on Tuesday July 28th.

Details about library hours as well as Circulation Desk and Reference Desk availability can be found on our Library Hours Calendar.

800 years ago today King John met the rebel Barons at Runnymede to sign and seal what would become known to posterity as Magna Carta, or the Great Charter. While King John may indeed have signed and sealed it on this day eight centuries ago, he had no intention of honoring it. He’d already made plans to appeal to the Pope to have the Charter nullified for having been signed under duress, which news he shared with his English subjects in early August of 1215 thus plunging the realm back into the turmoil of civil war. Fortunately for posterity, John would not outlive the conflict and upon his death in 1216, William Marshall, Earl of Pembroke and the newly appointed Regent to John’s son and now King, Henry III, reissued a revised version of the Charter. Marshall would again reissue it in 1217, and King Henry III would himself reissue it upon reaching his majority in 1225. It was only at this point in history that the Charter was titled Magna Carta in order to distinguish it from the Charter of the Forest clauses which had been reissued as a separate charter. Henry’s son, Edward I, would also reissue Magna Carta by having Parliament enact it in 1297 thereby securing its place in English legal history as the ‘first statute.’ It is in this later form that Magna Carta would come to be revered and appealed to as guaranteeing the rights of English, and later colonial American, subjects.

In honor of this 800th anniversary day, Georgetown Law Library is pleased to announce a small online collection of annotated late 16th and early 17th century imprints of the statutory compilation titled – Magna Carta cum Statutis. While all of Georgetown Law’s five annotated imprints have notations throughout in law-French, the professional language of English lawyers of the day, only three of them have extensive notations on the leaves containing Magna Carta and the 1608 imprint contains no notations about Magna Carta at all. The most extensive annotations are in copy 1 of the 1587 imprint that was signed by its owner on the title page – “Liber Richardi Bell de Grais Inn” [Richard Bell of Gray’s Inn’s book]. Complete images of all the leaves in these five imprints are available through Digital Georgetown.

We have also prepared a research guide on the history and legacy of Magna Carta. This guide includes links to treatises, articles, and books.

Beginning May 8th, the reference department will be unveiling a new model for providing reference services during the summer months. We will be monitoring Live Chat and e-mail on a regular basis in our offices, so will be available immediately via those mediums from 9am to 5pm Monday through Friday. For an in-person encounter, we are asking patrons to use the phone on the Reference Desk in Williams to call the librarian on duty. Signs will be posted at the desk. At Wolff, just ask at the Circulation Desk and a reference librarian will be contacted immediately.

We look forward to assisting all of our students, faculty and public patrons throughout the summer months and appreciate your feedback about our new model!

We have concluded the 2015 Annual Student Survey for the Georgetown Law Library.
This year, 387 students responded. Thank you. We appreciate all feedback.

Here’s a quick overview of the representation of student responses:

All students who completed the survey were eligible for a prize drawing.  Congratulations to our four student winners:  A law student (L ’16), Margot B. (L ’17), Christopher W. (L ’16), and another law student (L ’17). Each student received a $50 deposit to his or her GoCard account.

Thank you to all 387 students for participating in this year’s survey. We’ve already started reviewing responses, and we’ll use this input to inform decisions about services and resources.  You can view 2015 quantitative charts and a response summary on our website. For starters, here’s a view of the top items students are seeking on the library website: 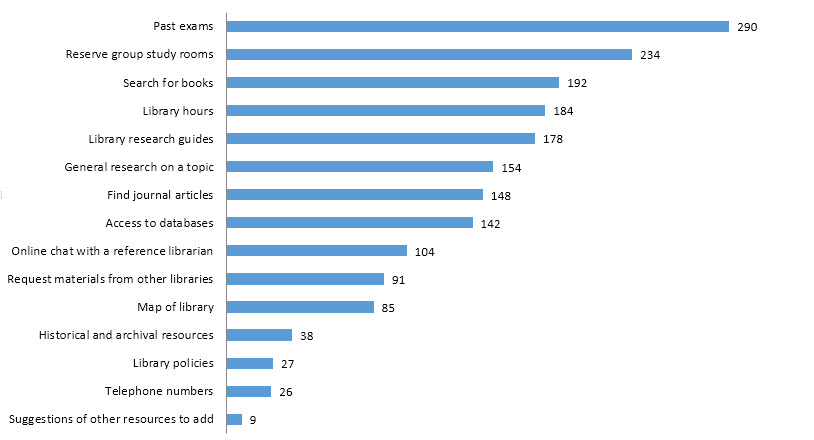 The second-most frequent reason listed is to book study rooms.  We recently announced a revision to the group study room reservation system, which we hope is easier to use.

Here’s an overview of the reasons students visit each of our two library locations: 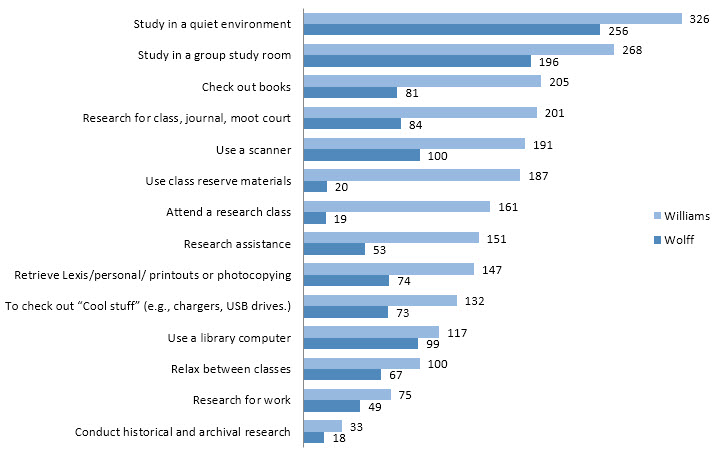 We will publish a summary response at a later date.  Students and others are encouraged to give us feedback at any time.

The library will have reduced hours during the holiday break and will be closed from December 24th until January 2nd. Standard operating hours resume on January 10th. To view a complete list of hours, please visit our calendar. The holiday hours are as follows: