Each spring, the Law Library conducts a survey of our students.  In 2017, 276 students responded to our survey, and we published summary charts of the responses back in April. Now we’re publishing a survey response, to show examples of changes to library facilities, content and services guided by the useful student input.

We have published the 2017 Law Library Survey Response, where you can see highlights of new hydration stations, new Xerox printers which may also be used for copying, scanning and faxing, the installation of white sound machines in group study rooms, and a new research guide on the history of civil rights in the United States.

We appreciate student input. Throughout the year, you are encouraged to send comments and suggestions through our suggestion page, and please keep an eye out for our next annual survey in

50 years ago today, on May 15, 1967, Supreme Court Associate Justice Abe Fortas delivered the landmark United States Supreme Court opinion in Application of Paul and Marjorie Gault, 387 U.S. 1 (1967), which held that juveniles accused of crimes in a delinquency proceeding must be afforded many of the same due process rights as adults, such as the right to counsel, the right to confront witnesses, the right against forced self-incrimination, and the right to maintain a record of the proceedings. 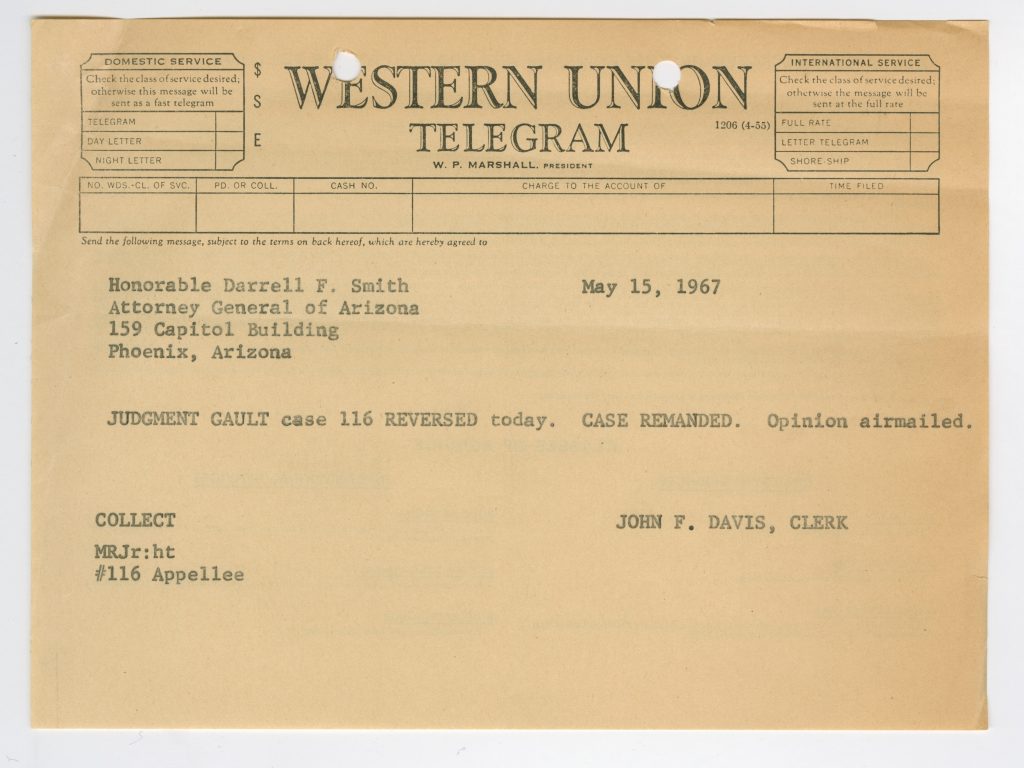 Source: Record Group 267: Records of the Supreme Court of the United States, 1772 – 2007 Series: Appellate Jurisdiction Case Files, 1792 – 2010, File Unit: Case File 116, October Term 1966, In Re Gault. The link to the catalog record for the digitized case file can be found in the “archival materials” section of the research portal.

To mark in re Gault @ 50, we have launched a new research portal that offers links to archival materials documenting the case, as well as references to selected scholarship analyzing the history of the case and the state of due process in juvenile court. 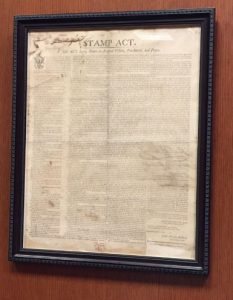 If you’re a Facebook user, you might have seen the post from the National Museum of American History noting that today, March 22, is the anniversary of the Stamp Act. On this day in 1765, Britain enacted the Stamp Act to raise money from the American colonies. It was the first direct tax on the colonies and, in the words of the Facebook post, “provoked an immediate, violent response.”

Did you know that Special Collections has a copy of the Stamp Act?  We do, and it’s on display in our reading room. Come by and check it out!
We’re located in 210 Williams; our hours are 9am to 5pm Monday through Friday. No appointment is needed, feel free to stop by any time we are open.

For more on the history of the Stamp Act, see the
National Museum of American History website.

In honor of Women’s History Month, it’s appropriate to feature the Women & the Law collection on HeinOnline. This collection brings together books, biographies and periodicals dedicated to women’s roles in society and the law. With over 600,000 pages of material, researchers have access to an historical progression of women’s roles and rights over the past 200 years. Organized by subjects such as abortion, feminism & legal theory, women & education and women & employment, just to name a few, researchers can access the material by full-text searching or browsing. 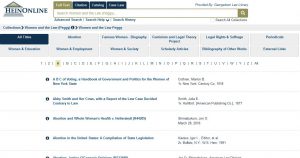 While legal historians used to have to sift through papers to learn what John Marshall and John Jay had to say, they can now access this database and search for keywords, events, case names  and more.

Biographical information on over 25,000 people born between 1713 and 1815 is available in the People of the Founding Era database. You can find out information about every person George Washington, Thomas Jefferson, Alexander Hamilton, among others, corresponded with in the infancy of our nation.

Georgetown Law Library Special Collections is pleased to announce two new exhibits featuring rare books from our collections. The first is our own exhibit, Magna Carta, Sir Edward Coke, and the Rule of Law at the Dawn of American Settlement. This exhibit is located in the Special Collections exhibit case outside Room 210 in the Williams Law Library. The exhibit features 5 imprints of Magna Carta cum Statutis tum antiquis tum recentibus, the leading compilation of English statutes from the reigns of Elizabeth I and James VI & I, that were annotated in law French by their owners. It also includes images from Sir Edward Coke’s personal annotated copy of Bracton, the landmark treatise of English law written shortly after the authoritative 1225 version of Magna Carta was issued by Henry III. Full text images of all of the featured books are available through Digital Georgetown.

The second exhibit is Age of Lawyers: The Roots of American Law in Shakespeare’s Britain at the Folger Shakespeare Library. This exhibit features our copy of Coke’s Bracton and our set of 17th century imprints of Parts 1 through 12 of Coke’s case reports, which were so highly esteemed that they quickly became known simply as The Reports; as well as many other rare books and manuscripts from the Folger’s collections.

For further information about these two exhibits, please contact us at specl@law.georgetown.edu.

800 years ago today King John met the rebel Barons at Runnymede to sign and seal what would become known to posterity as Magna Carta, or the Great Charter. While King John may indeed have signed and sealed it on this day eight centuries ago, he had no intention of honoring it. He’d already made plans to appeal to the Pope to have the Charter nullified for having been signed under duress, which news he shared with his English subjects in early August of 1215 thus plunging the realm back into the turmoil of civil war. Fortunately for posterity, John would not outlive the conflict and upon his death in 1216, William Marshall, Earl of Pembroke and the newly appointed Regent to John’s son and now King, Henry III, reissued a revised version of the Charter. Marshall would again reissue it in 1217, and King Henry III would himself reissue it upon reaching his majority in 1225. It was only at this point in history that the Charter was titled Magna Carta in order to distinguish it from the Charter of the Forest clauses which had been reissued as a separate charter. Henry’s son, Edward I, would also reissue Magna Carta by having Parliament enact it in 1297 thereby securing its place in English legal history as the ‘first statute.’ It is in this later form that Magna Carta would come to be revered and appealed to as guaranteeing the rights of English, and later colonial American, subjects.

In honor of this 800th anniversary day, Georgetown Law Library is pleased to announce a small online collection of annotated late 16th and early 17th century imprints of the statutory compilation titled – Magna Carta cum Statutis. While all of Georgetown Law’s five annotated imprints have notations throughout in law-French, the professional language of English lawyers of the day, only three of them have extensive notations on the leaves containing Magna Carta and the 1608 imprint contains no notations about Magna Carta at all. The most extensive annotations are in copy 1 of the 1587 imprint that was signed by its owner on the title page – “Liber Richardi Bell de Grais Inn” [Richard Bell of Gray’s Inn’s book]. Complete images of all the leaves in these five imprints are available through Digital Georgetown.

We have also prepared a research guide on the history and legacy of Magna Carta. This guide includes links to treatises, articles, and books.

The Law Center Archives houses a number of unique audio visual materials. Below is a clip of Marion Barry speaking at the McDonough Hall counter-dedication in September of 1971. Marion Barry was the director of the group Pride, Inc. at the time. He was joined by William Kunstler, Esq. , Catherine G. Roraback, a defense attorney in the New Haven Black Panther trial, and Arthur Kinoy, a law professor and activist from Rutgers University. At the counter-dedication Marion Barry asked students to fulfill their responsibility to the community around them. 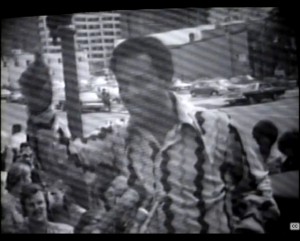 For more information on the counter-dedication of McDonough Hall stop by Special Collections in Williams 210 or email specl@law.georgetown.edu .

The Lord Eldon Pamphlets collection contains 1059 titles covering a wide range of subjects including, the debates over the re-introduction of civil jury trials and other reforms to Scotland’s legal system, the debates over Catholic Emancipation, various proposals to modify Britain’s financial systems, proposals for making and keeping the peace with France, proposals to reform the Court of Chancery, proposals for penal reform, proposals for ending the Slave Trade, and debates over the 1801 Union with Ireland, among many other political topics. There are even literary, agricultural, and scientific pamphlets. It is a diverse collection reflecting both Lord Eldon’s interests and the interest of authors in gaining the notice of his attention throughout his professional career by sending him presentation copies. Lord Eldon had apparently even acquired a few of his brother Lord Stowell’s collected pamphlets as several are signed “William Scott” or “W.S.” In contrast to the majority of the books in the original Middle Temple Lord Eldon Library collection a significant number of the pamphlets are annotated in Lord Eldon’s hand, especially those dealing with Chancery issues and Catholic Emancipation. Regrettably, some of those annotations were cropped when the pamphlets were bound together into their respective volumes.

According to the latest polls the question of whether Scotland will remain part of the United Kingdom of Great Britain and Northern Ireland is running neck and neck. For those interested in knowing more about this historic referendum and its historical context, the Georgetown Law Library has updated its Scottish Legal History Research Guide to include relevant sources. These updates are thanks in part to input from our former Resident Librarian, Yasmin Morais, who is now the Cataloging Librarian at UDC School of Law.