The details of the secure zone have not yet been released.  In previous years, the zone has covered about 1.5 miles from K Street and Massachusetts Avenue NW on the north to Independence Avenue NE & NW on the south, and 2nd Street NE on the east to 23rd Street NW on the west.  To be allowed into this area you must have and show current Law Center identification at security checkpoints.

For newcomers to DC, this Guide to the 2017 Presidential Inauguration provides some information about additional closures (e.g., Metro stations).  Many locals will be staying home to avoid the commotion, which is expected to continue at least until the next day when the Women’s March on Washington will take place.

On September 24th, 1964, the Warren Commission presented their findings on the assassination of President John F. Kennedy to President Johnson. This 26 volume set, including the report and Congressional hearings was first published by the Government Printing Office. Today it has been digitized and is now available to all researchers to access via FDsys.gov. 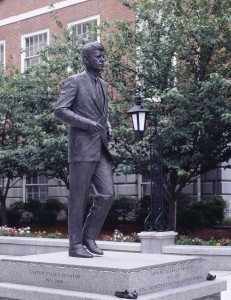 Whether you’re interested in reading the report or the Congressional testimony of Lee Harvey Oswald’s widow, Marina Oswald or those who participated in the arrest and questioning of Jack Ruby, all are available.

In celebration of 125 years, the Georgetown Law Library looks to the future with a symposium of the academic, advocacy, government, and library communities on Wednesday, January 30 at Georgetown Law.

“Big data” is a term perhaps too narrow for the topic: The size of data sets is not the key to big data issues. Rather, it’s the changes in society that are growing along with our ability to discover meaning by connecting points of information electronically, across numerous, vast, and often unrelated stores of data.

This conference will examine the public good and collective harms associated with the large-scale aggregation of information from public and private sources. During the course of the day, panelists will also discuss how scholars, researchers, and information professionals use very large or complex data sets to distill meaning and develop public policy.

Registration is free and open to all. A complimentary lunch will be provided for registered attendees, however space is limited. Register now to reserve your place and view additional information at www.law.georgetown.edu/library/about/125/symposium.

At this time, these returns are only available in pdf format, but Public.Resource.Org plan to extract the underlying data from these returns to make them more amenable for data analysis.

These records and more information about the data set are available at https://bulk.resource.org/irs.gov/eo/readme.html.

"Georgetown Law faculty are increasingly publishing scholarship with empirical data components," said Law Library Director and Professor of Law Michelle Wu. "This trend is reflected in the broader legal academy as well. As a result, free, open and reliable access to source data has become critical to the development of legal scholarship. With an eye towards facilitating such scholarship, the Georgetown Law Library is offering this innovative service to support the preservation and sharing of digital datasets."

The Georgetown Law Dataverse is a repository of digital datasets, collections of statistical information or other related data used in empirical scholarship. This service will allow authors to permanently preserve and publically release data that they have collected. Authors who continue to update their work after publication can upload revised data as it becomes available.

More information about the Dataverse is available here: http://www.ll.georgetown.edu/collections/dataverse.cfm.

‘LINK ROT’ AND LEGAL RESOURCES ON THE WEB: HAVE WE REACHED A PLATEAU?
THE CHESAPEAKE GROUP’S FOURTH ANNUAL ANALYSIS FINDS THAT LINK ROT IS SLOWING,
BUT STILL PRESENT IN MORE THAN 30% OF URLs
Does the rate at which Web pages are lost to “link rot” slow down over time? The latest link-rot study conducted by the Chesapeake Digital Preservation Group shows that this might be the case.
As National Preservation Week 2011 begins, the Chesapeake Digital Preservation Group is releasing the results of its fourth annual analysis of link rot among the original URLs for law- and policy-related materials published to the Web and archived by the Chesapeake Group. After three years of observing the rate of link rot nearly double on an annual basis, the Chesapeake Group found that link rot in its sample of URLs originally collected in 2007 and 2008 increased by only 2.5 percent in 2011. The sample includes URLs primarily from state government (.state.__.us), government (.gov), and organization (.org) top-level domains.
The Chesapeake Group is a shared digital archive for the preservation of Web-published legal materials, which often disappear as online content is reorganized or deleted over time. Participants include the Georgetown and Harvard Law Libraries and the State Law Libraries of Maryland and Virginia.
The 2011 analysis reveals that 30.4 percent of the online publications in the sample have now disappeared from their original Web pages but, due to the group’s Web preservation efforts, remain accessible via permanent archive URLs. This sample of online publications was first analyzed in 2008 and showed link rot to be present in 8.3 percent of the publications’ original URLs. In 2009, the same sample showed an increase in link rot to 14.3 percent, and in 2010, link rot in the sample jumped to 27.9 percent.
Although the 2011 link-rot rate of 30.4 percent represents a significant loss of content over the four-year period, the increase observed from 2010 to 2011 is less than three percent and deviates from the pattern of steep increases in link rot observed in previous years.
The analysis also explores the prevalence of link rot among top-level domains. A detailed summary of the study is available at http://legalinfoarchive.org/.
The Chesapeake Group is a member of LIPA’s Legal Information Archive, a collaborative digital preservation program for the law library community. For more information, visit the LIPA Web site at www.aallnet.org/committee/lipa or the Chesapeake Group at www.legalinfoarchive.org.

Now available to the Georgetown Law community, Paratext’s Public Documents Masterfile is an ever-growing trove of info on over two centuries of U.S., international, and foreign government publications.

Many records link through to documents on the open web at Google Books, Library of Congress, and other digital repositories, or let you view print and microform library holdings via WorldCat. Internal subject headings with hyperlinks also allow for easy navigation between topical categories.

The new offering is a complement to the 19th Century Masterfile of pre-1930 literature and periodicals, online at Georgetown since 2006 and also well worth exploring.

This Veterans Day, we might reflect upon the progress made possible through the sacrifice of military servicemembers, and the tragedy, triumph, and trials of war. In legal history, the tribunals for war crimes following World War II have had a profound impact on our domestic and international jurisprudence and scholarship, and there are a growing number of online resources to help us research these important materials.

Transcripts and associated documents of the Nuremberg Trials (officially the International Military Tribunal for Germany) have been digitized, organized, and made available for free on the Web through several ongoing initiatives, including Yale’s Avalon Project, the Nuremberg Trials Project at Harvard Law, and the Donovan Nuremberg Trials Collection at the Cornell Law Library. The National Archives has also converted many of their microform documents on WWII crimes and trials to PDF.

Although no comparably extensive online compilation yet exists for the Tokyo Trials (International Military Tribunal for The Far East), some of the most important and interesting documents are available on iBiblio.org through the HyperWar Foundation (the Tribunal’s judgment) and the Harry S. Truman Library website (official correspondence and photos). For now, full transcripts of the Tokyo Trials are only available in print, here at Georgetown in the Wolff Library.

The Law Library also offers a good selection of relevant print and electronic resources; try an Encore keyword search to see our cataloged holdings on the Nuremberg and Tokyo Trials.

The 2010 analysis reveals that nearly 28 percent of the online publications archived between March 2007 and March 2008 have now disappeared from their original locations on the Web but, due to the project’s preservation efforts, remain accessible via permanent archive URLs. This sample of online publications was first analyzed in 2008 and showed link rot to be present in 8.3 percent of the publications’ original URLs. One year later, in 2009, the same sample showed an increase in link rot to 14.3 percent.

The analysis also explores the prevalence of link rot among top-level domains, showing content at state-government URLs (.state.__.us) to be at a significant risk for link rot, compared to resources posted to government (.gov) and organization (.org) Web sites.

A detailed summary of the study is available at http://legalinfoarchive.org/.

The Chesapeake Project was launched in 2007 by the Georgetown University Law Library and the State Law Libraries of Maryland and Virginia as a collaborative digital archive for the preservation of important Web-published legal materials, which often disappear as online content is reorganized or deleted over time.

For more information, visit the LIPA Web site at www.aallnet.org/committee/lipa or the Chesapeake Project at www.legalinfoarchive.org.

Fans of the legislative process have a new favorite Web site to frequent. C-SPAN has made digital copies of every program it has broadcast since 1987 available online. This video collection, totaling more than 160,000 hours, is searchable and is indexed by subject, person name, congressional committee, and several other fields. In addition to its coverage of Congressional activity, C-SPAN also broadcasts original programs, such as Booknotes, and America and the Courts. These programs are included as well, and the entire collection is available at no cost for education, research, review or home viewing purposes.