Everyone at the Law Library, including the LiBearian, wishes you the best of luck and success on the bar exam! 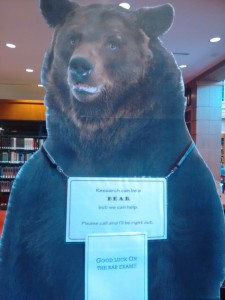 The Supreme Court has posted the audio recordings of the two-part oral argument in Obergefell v. Hodges. The transcripts will be posted at the same links.

Part I (Does the 14th Amendment require a state to license a marriage between two people of the same sex?)

Part II (Does the 14th Amendment require a state to recognize a marriage between two people of the same sex when their marriage was lawfully licensed and performed out-of-state?)

Santa may rely on the Elf on the Shelf for his surveillance, but the US government uses the NSA.

If you’re doing research related to the NSA and other electronic surveillance, The Library has a trial subscription (expiring December 25) to ProQuest Collection: Electronic Surveillance and the NSA.

The vast majority of the collection focuses on records, such as in Operation Mystic, related to the classified documents leaked by Edward Snowden to a handful of journalists and that were ultimately published by newspapers, including The Guardian, The Washington Post, and The New York Times — (available as part of ProQuest Historical Newspapers™ to cross-reference historic coverage on the topic of electronic surveillance. For more information on newspaper research, please see our research guide).

If you use the trial database and have any comments, please let us know.

On the order list for the first day of the term, the Supreme Court denied cert in all seven of the petitions arising from challenges to state bans on same-sex marriage. This includes the 4th Circuit decision concerning the Virginia ban, Bostic v. Schaefer.

The Fourth Circuit today announced its decision (2-1; Judge Floyd wrote the majority opinion) in Bostic v. Schaefer (No. 14-1167) affirming the district court for the Eastern District of Virginia in holding that Virginia’s ban on same-sex marriage is unconstitutional under the 14th Amendment. The Court did not stay its judgment. Judge Niemeyer wrote a dissent.

A copy of the opinion is available here.

The Tenth Circuit today in a 2-1 opinion affirmed the federal district court for the District of Utah’s decision holding Utah’s same-sex marriage ban unconstitutional (Kitchen v. Herbert). This is the first federal circuit court decision issued after the Supreme Court’s decision in Windsor.

In a similar holding today, the federal district court for the Southern District of Indiana held that Indiana’s ban is unconstitutional (Baskin v. Bogan, 1:14-cv-00355).

The Trademark Trial and Appeal Board of the US Patent and Trademark Office today invalidated the trademark registration of the Washington Redskins on the grounds that the team name is “disparaging to Native Americans.”

Today, the Supreme Court issued a unanimous opinion (8-0; Justice Kagan did not participate) in United States v. Quality Stores, Inc. holding that severance payments to involuntarily-terminated employees because of the end of the business in bankruptcy constitutes taxable wages for the purpose of FICA taxes under 26 USC sec. 3101. Justice Kennedy wrote the opinion, which reversed the decision of the Sixth Circuit.

The case is somewhat notable for its procedural history, as it is a tax case that was litigated originally as an adversary proceeding in bankruptcy court, rather than as a more typical deficiency case in Tax Court or a refund suit in district court or the Court of Federal Claims.

Notable provisions of the Camp proposal include a substantial flattening of the income tax rate structure, simplification of individual deductions, and treating investment income (capital gains) as ordinary income (albeit with a 40% exemption).

The debate over the progressiveness of the income tax structure, over-complicated forms and obtuse statutes, and how (or whether) individuals’ savings and investments should be subject to income tax goes back to the earliest days of the Internal Revenue Code.

The Library’s Ward M. Hussey tax legislative history collection provides extensive (and unique) documentation of this century-long policy and legislative debate. Ward M. Hussey served in the Office of the Legislative Counsel of the U.S. House of Representatives from 1946 through 1989. He assisted in the drafting of numerous tax laws including the Internal Revenue Codes of 1954 and 1986. In 2002, he donated his collection of historic tax legislative materials (over 200 volumes, including the legislative drafts and reports for all the revenue acts from 1918 until 1980) to the Georgetown Law Library.

Relevant to the Camp proposal in the Hussey collection is a set of pamphlets from 1920 advocating tax reform written by a diverse set of authors, including T.S. Adams, a Yale economics professor; Otto H. Kahn, an investment banker and philanthropist; and the National Industrial Conference Board. Otto Kahn’s broadside could have been written today as part of the Camp proposal:

Our existing taxation measures … are cumbersome, vexatious, and almost incredibly complex. * * * They discourage, disturb, and impede business, and place the American business man at a disadvantage as against his European competitor. At a time when America is aiming to become a world center they deter foreign capital from coming here. They throw upon the government an administrative task of such vastness and intricacy that the departments concerned simply cannot cope with it.

Otto H. Kahn, “Our Taxation Ills with Suggestions for Their Curing” in Revenue Act of 1921: Miscellaneous Pamphlets, at p.2 (1921).

The more things change, the more they stay the same!

On Tuesday, November 12, the DC Circuit will have a special argument session at Georgetown Law in the Hart Auditorium at 9:30 am.

The 2 cases being heard are

The briefs are available on TWEN in the course “DC Circuit’s Oral Argument, November 12, 2013.”

The panel hearing the cases is made up of Chief Judge Merrick Garland, Judge Judith Rogers, and Judge Brett Kavanaugh. 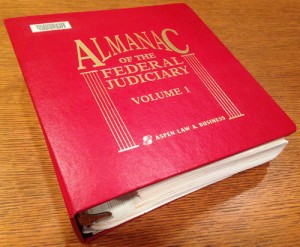 For more information about the judges, including their biographies, most important decisions, what it is like to argue in front of them, their judicial philosophies, lawyers’ perspectives, etc., please consult The Almanac of the Federal Judiciary, which the Library has in print in the Williams Library Reading Room, or you can consult the Almanac on Westlaw.