Special Collections’ recent acquisitions include a unique 18th century annotated compilation of European treaties, an 1760 collection of Portuguese and Papal laws for the colony of Brazil, a first edition of the first official Tennessee law reports, and an early 19th century American legal apprentice’s notebook. 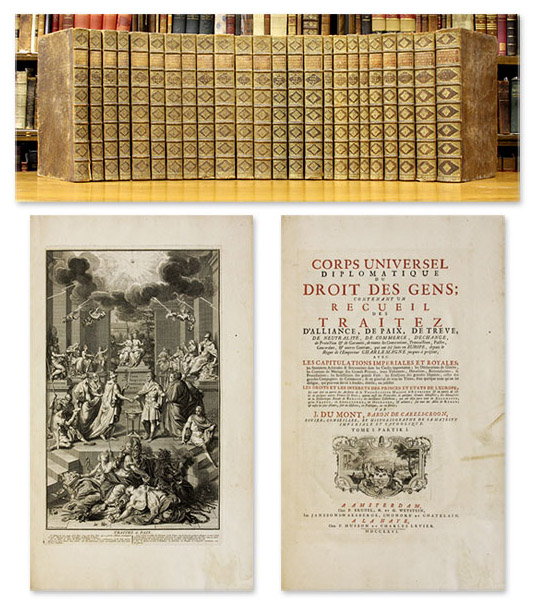 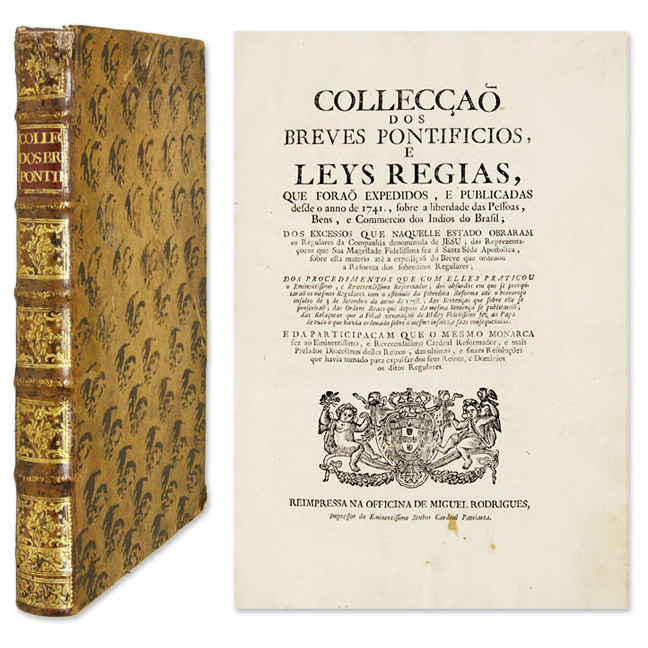 The 1760 second imprint of the Colleccao dos Breves Pontificios, e Leys Regias, que Forao Expedidos, e Publicadas desde o Anno de 1741, sobre a Liberdade das Pessoas, Bens, e Commercio dos Indios do Brasil is bound together with the 1760 Supplemento a Colleccao dos Breves Pontificios, Leys Regias, e Officios que Sepassaram Entre as Cortes de Roma e Lisboa. These are collections of laws affecting the rights of persons, property and commercial activities in Brazil, many of which were promulgated to limit the activities of the Jesuit Order within the colony. The last set of laws in the Supplemento are concerned with the expulsion of the Jesuits from Brazil, which was part of a more extensive effort to expel the Jesuits from Portugal and all its colonies. Our newly acquired copy is a beautiful example of 18th century "cats-paw" decorated sheep binding with a gilt-stamped spine.

Tennessee Reports, Cases Ruled and Adjudged in the Superior Courts of Law and Equity, and Federal Courts for the State of Tennessee, edited by John Overton, and Reports of Cases Argued and Adjudged in the Court of Errors and Appeals of the State of Tennessee, from the year 1816 to 1817, edited by John Haywood, report territorial, state, and federal decisions from 1791 to 1817. Overton and Haywood were early Tennessee judges during the period covered by their reports. They were also both natives of North Carolina, where Judge Overton had served as a delegate to the 1789 convention that ratified the U.S. Constitution and Judge Haywood had compiled two volumes of North Carolina’s first court reports. After settling in Tennessee, Judge Overton became a friend and business colleague of Andrew Jackson and leading supporter and organizer of Jackson’s presidential campaigns in the 1820s. Judge Haywood subsequently authored two of the leading early works of Tennessee history – The Natural and Aboriginal History of Tennessee and The Civil and Political History of Tennessee. Our copies of these five volumes have been recently rebound in period-style calf. 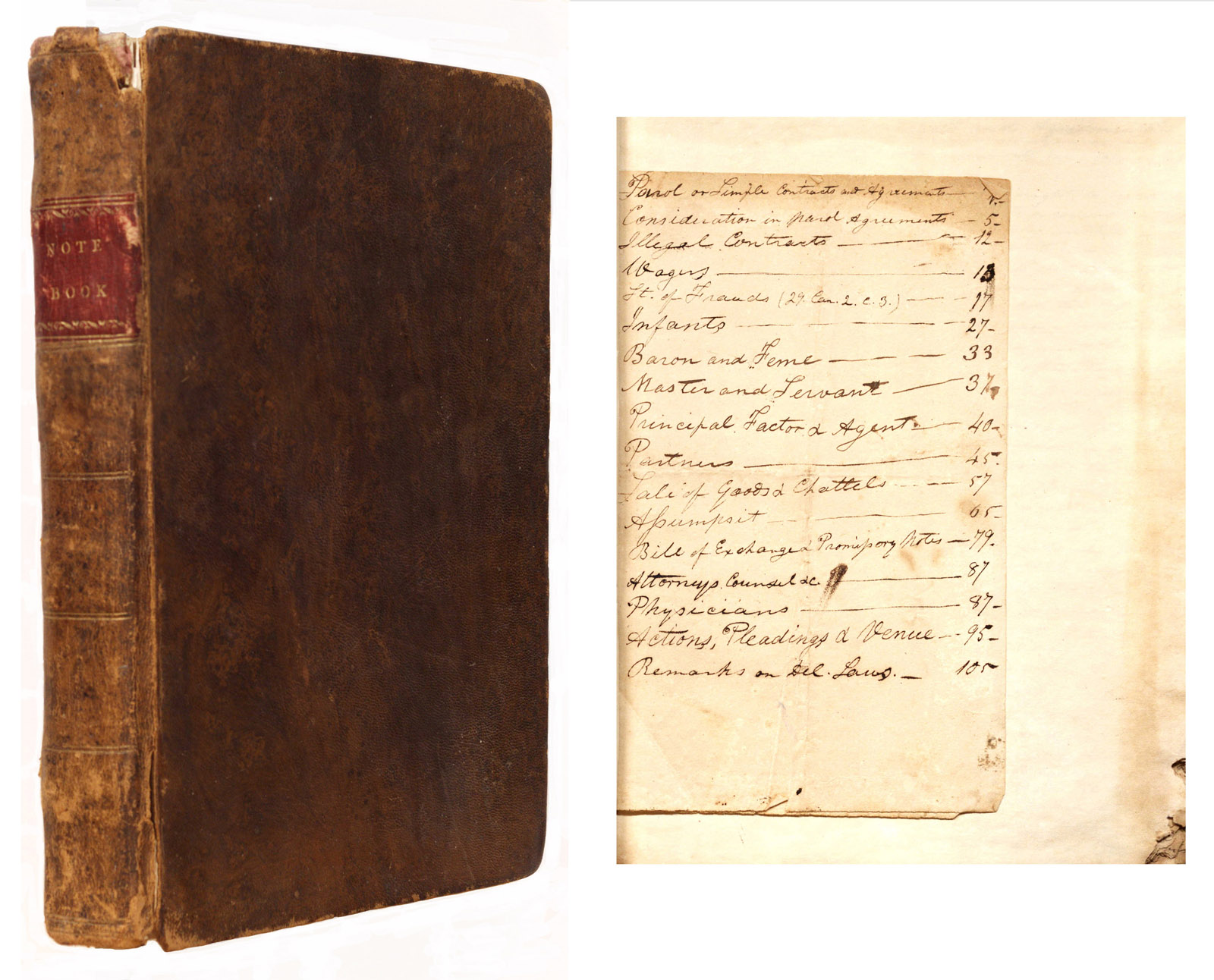 The manuscript notebook of Robert Frame (1800-1847) contains outlines of legal subjects written while Frame read the law as an apprentice in the law office of a John M. Clayton (1796-1856), who would subsequently become a U.S. Senator, Chief Justice of Delaware, and later a U.S Secretary of State in the 1830s, 40s and 50s. Frame himself would later be appointed Attorney General of Delaware when he was 30 years old, and went on to serve in the General Assembly. His apprentice’s notebook was compiled at some point between 1820 and 1823 (his index is dated 1823), with some entries likely being added after that period. He was admitted to the Delaware Bar in 1824. Frame’s Notebook is an example of how many early American lawyers taught themselves the law by ‘reading the law’ in an established attorney’s office. The blank notebook was purchased for $3 by Robert Frame circa 1820, and is in its original faux tree-calf sheep binding .

Special Collections is located in Williams 210, and may be contacted at specl@law.georgetown.edu. 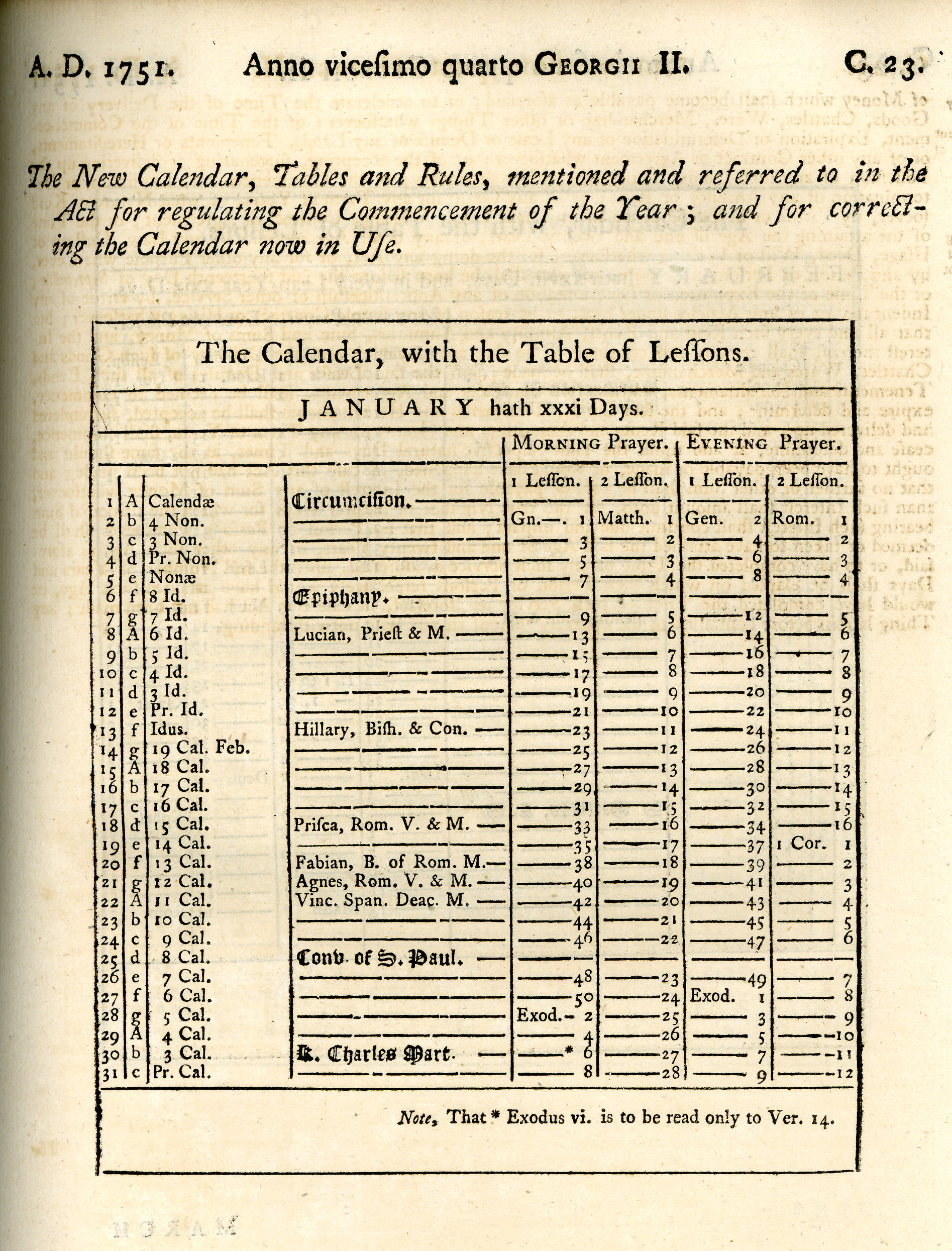 In 21st century America, we all know that New Year's Day is January 1st. But, did you know that this wasn't alway so?

From 1582 until 1751, England refused to adopt the 'new' Gregorian Calendar on the grounds that it was steeped in Roman Catholic 'superstitions' and not at all proper for a Protestant country. This resulted in almost two centuries of dual and/or contradictory dating of legal documents, governmental proclamations, newspapers, and other printed materials. Sometimes the document would follow the practice of every other European nation, including Protestant Scotland, and use January 1st as the start of each new year. Sometimes the document would follow the English practice of starting each official new year on March 25th. Sometimes the document would list both years for any date between January 1st and March 25th, as in 'January 1, 1700/01'. You can easily imagine the potential for confusion and complications this ongoing situation led to in England and its dominions and colonies.

220 years ago today Virginia became the 11th state to ratify the first 10 amendments to the US Constitution. Almost half of the original 13 states had either conditioned their ratification or outright refused ratification of the 1787 Constitution upon a demand to add a Bill of Rights. Although originally opposed to these calls for a Bill of Rights, James Madison had become the leading proponent of adopting a Bill of Rights by the time the First Congress met in April of 1789. The various state ratification conventions had by this time sent along 210 proposed amendments, which were sorted through and consolidated down to 12 by September 1789. The original first and second amendments failed to gain enough support (although the original second amendment would become the 27th Amendment – limiting the ability of Congress to raise its own salary – in 1992), leaving amendments three to twelve to become the first 10 amendments to the Constitution as the Bill of Rights we celebrate today. 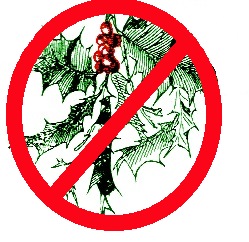 It's that special time of year again! Yes, once again we hear the seasonal sounds of complaints about a 'War on Christmas' wafting through the blogosphere and cable news channels. Whatever one may think of this alleged suppression of all things Christmas, the current 'conflict' pales in contrast to the genuine banning of Christmas celebrations that took place in 16th and 17th century Britain and New England. The Real 'War on Christmas': 1581-1690 exhibit in the Williams Library Atrium displays facsimiles of several laws enacted during this period that outlawed the singing of carols, the holding of feasts and festivals, and other aspects of what we today cluster together under the seasonal rubric of holiday joy. These materials illuminate an easily overlooked chapter in the history of religious liberty, and give some valuable perspective to the current debate over the 'War on Christmas'.

One of the truly delightful aspects of working with rare books is finding unique and sometimes suprising objects, inscriptions, and other miscellanies within them. The newest exhibit in the atrium display cases of the Williams Library location of Georgetown Law Library features a few such hidden treasures. Miscellanies Found in Blackstone's Commentaries includes a handwritten index to the first American edition of Blackstone's that included editorial notes and supplementary essays on, and case citations to, American law – Tucker's Blackstone published in 1803; a bookmark from the law bookstore frequented by Georgetown Law students in the early 1900s – John Byrne & Co.; and, a study outline list of Offenses against Public Justice written by Thomas A. Tighe of the Georgetown Law Class of 1914. Pictured here is Georgetown Law Library's copy of vol. 1 of the 1765 first edition of Blackstone's together with the original owner's inscription and bookplate found on the inside front cover. 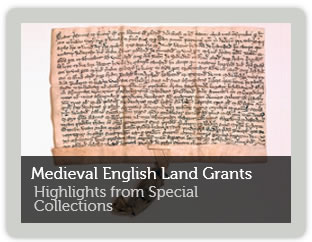 Have you ever wondered how real estate transactions were made in times long past of lords and ladies, castles and jousts? What did a land sales contract or lease look like centuries before the development of standardized printed real estate forms? Then stop by one of the library's touch-screen kiosks or go to our online gallery and explore our latest digital exhibit – Medieval English Land Grants from Special Collections. The exhibit features several land transfer documents from the reign of Edward I (1272-1307) that are part of Georgetown Law Library's collections of rare and historical legal materials.

An invaluable online resource for researching British legal history just got even better. The Anglo-American Legal Tradition website [AALT] recently added 30 new series of manuscript materials from the UK National Archives [TNA] that extend the coverage of AALT beyond the year of 1650 into the 18th century. Launched in 2007 by the University of Houston’s O’Quinn Law Library, the site now contains nearly 5,750,000 images of legal and law-related manuscripts from the early 13th century into the early 18th century. These include court records from the patent, close, fine, plea, Chancery, memoranda, and liberate rolls. The new materials also add the Privy Council miscellaneous papers and foreign accounts that touch upon military, taxation, customs, and other areas of interest to scholars researching legal history. AALT is an open access totally free online resource that is steadily being improved with navigation tools and new materials. Because most legal and governmental records were handwritten not just before the invention of the printing press but for centuries afterward, open access sites like AALT provide an essential window into the legal past.

Pictured here is a 1790 eviction notice from Special Collections. 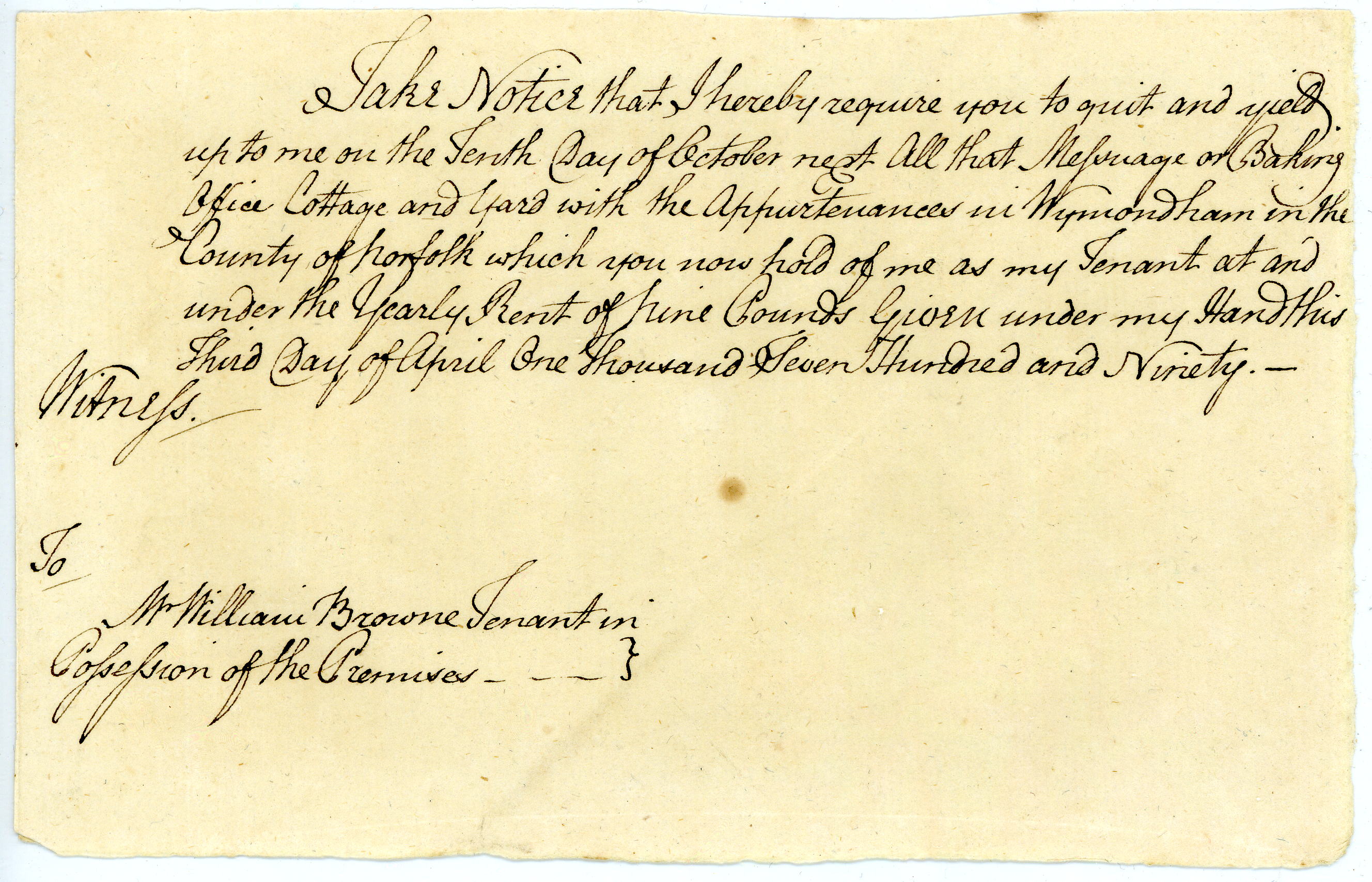