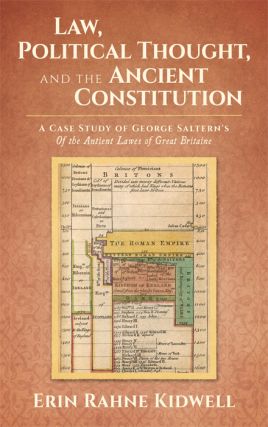 Erin R. Kidwell served as the Curator of Legal History Collections at the Law Library until May 2016. The case study evolved from Kidwell’s 1999 S.J.D. dissertation, which she completed at Georgetown Law: Arthur and the Ancient Constitution: History…Story…Literature…Myth…Law: the indivisible link between culture and constitution, and focuses on George Saltern’s 1605 Of the Antient Lawes of great Britaine, one of the lesser known texts that were produced to debate the union proposals for England and Scotland made by James VI and I. Kidwell analyzes the “creative mix of mythical and historical elements present in the juridicial historiography of the ancient constitution.” The book includes a preface, an introduction, three chapters, a concluding essay, a three-part appendix, including a reproduction of Saltern’s text, as well as a bibliography and an index. In the concluding essay, Kidwell discusses the perdurance of the constitutional antiquarian tradition in the culture of British-American constitutionalism from the late Tudor period until the present day.  In her preface, Kidwell writes that she is “both fascinated and mystified that those secret footsteps of ancient constitutionalism have not only survived the tides of time but have continued to adapt and influence our juridicial culture to this day.”

The library’s Digital Initiatives Division has also digitized the Law Library’s copy of George Saltern’s Of the Antient Lawes of great Britaine, which is available on Digital Georgetown: