This week, we look into a unique way one university is keeping its creative community going during these times. Then we review some recently released data on race and gender representation in higher education.

You can read previous editions of this series here and here.

How to Create and Sustain Creative Energy

In an article for EdSurge, Rebecca Koenig chronicles a practice at Davidson College which is helping arts students, and the university community writ large, share creative work in an informal environment that Koenig describes as “part literary salon, part open-mic night.”

Two Davidson professors, Alan Michael Parker and Daniel Lynds, have found themselves playing the roles of director and stage manager for Cold Open, an event they have been hosting every Tuesday night for six weeks. It starts with a land acknowledgment and performance from a special guest, followed by performances from students and professors. “Previous opening acts have included alumnus Clint Smith, poet and co-host of the ‘Pod Save the People’ podcast, and former visiting writing professor Victoria Redel,” Koenig noted.

For the student body and faculty, Cold Open is a place to share creative work that is in progress or try new things inspired by the unprecedented circumstances of the moment. It’s a virtual place to engage in the creative process. And it can also be incredibly fun. A chemistry professor recently sang and played a rendition of Elton John’s “Your Song” on the piano that was incredibly well-received by the “crowd” tuning in online.

“The circumstances are so unimagined that, for me at least, the way the Cold Open functions is a kind of community by triage,” Parker said, which aligns with the educational mission of a college, Lynds says: “The community is the curriculum.”

The Gender and Racial Gaps in Higher Ed

Emma Whitford broke down the results of the College and University Professional Association for Human Resources annual report, which includes data from 1,114 higher education institutions and more than 250,000 employees. It contains data on mid-level professionals, breaking out factors like salary and years on the job with demographic data such as race and ethnicity, gender, and age.

Some of the gaps along racial and gender lines are profound.

“Professionals who are women or members of racial or ethnic minority groups remain underrepresented in all higher education leadership areas except one, according to a new report whose lead author says much of the disparity is due to insufficient hiring pipelines and gaps in pay,” Whitford writes.

While 60% of higher education professionals are women and 20% are racial minorities, they are disproportionately underrepresented in leadership across many of the areas documented in this study. 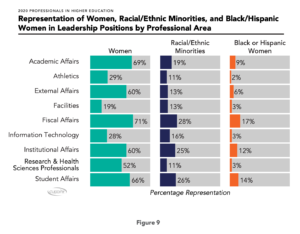 “The findings echo an earlier report by CUPA-HR that found women and minorities are also underrepresented in higher education executive roles,” Whitford said. “Women and minority leaders are also paid less than their white male counterparts in these areas, with one exception.”

While the gaps are significant, they are shrinking. Susan Whealler Johnston, NACUBO’s president and CEO, told Whitford she is encouraged by this new data, but “that’s not good enough.” 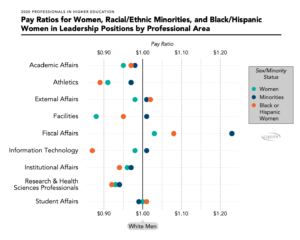