The rise, prominence, and accessibility of social media undoubtedly has changed the way we communicate. “People have very strong opinions about issues, but then they feel they can’t talk about those in person—so they connect over social media to discuss. But in doing that these conversations are not happening in a personal way. They don’t actually see the person they’re talking to. I think that has a major impact on how people engage in any conversation,” says Professor Jeanine Turner (Communication, Culture, and Technology).

Today, we live in a highly mediated environment where people, on average, touch their phones more than 2,500 times per day. As such, Turner thinks that making time and space for in-person group discernment and reflection is imperative—and must be at the crux of a Jesuit education. Turner, who studies the impact of new media and a mediated environment on the ways in which people interact and converse with others, participated in the Teaching to Mission Engelhard Conversation Series this past fall.

The Engelhard Project launched the Engelhard Conversation Series in 2017 to consciously make the time and space for faculty from across campus to be in dialogue with one another. Each week over the course of the fall semester in Wolfington Hall, the home of Georgetown’s Jesuit community, a small group of faculty committed to breaking bread with one another at the dinner table. Guided by the book they all read, The Jesuit Guide to (Almost) Everything by James Martin, the group discussed the work they do as teachers and mentors and how that work connects to Georgetown’s mission and values.

Turner said that Teaching to Mission presented her with the unique opportunity to connect with fellow faculty about topics other than curriculum and student issues. “It allowed us to address those kind of human issues that transcend all of these curricular issues. It really helped us to find common ground,” says Turner. 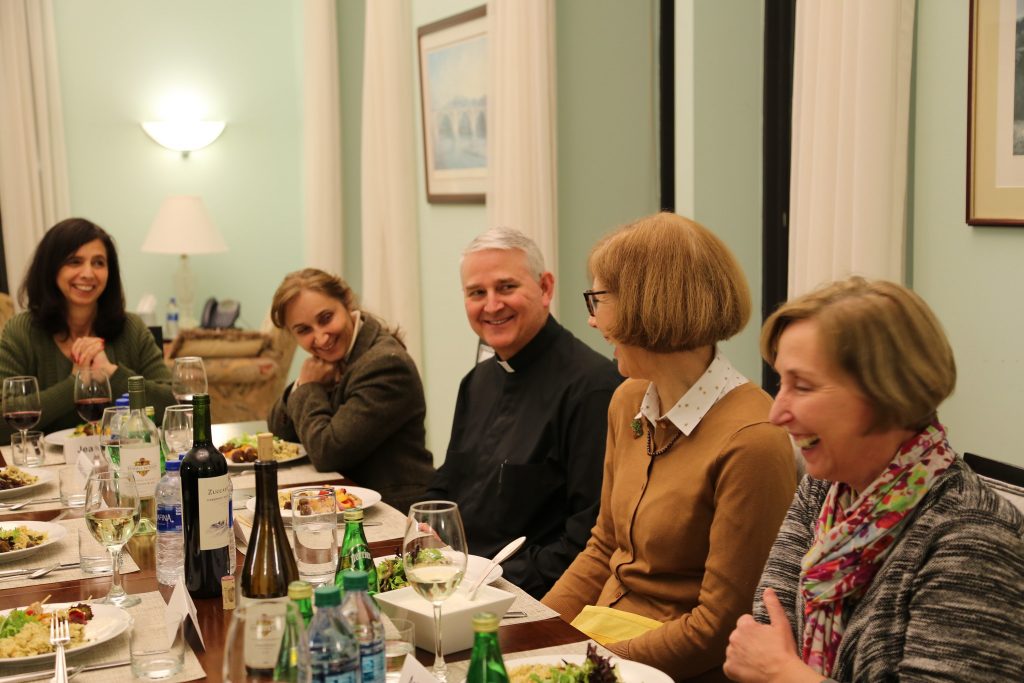 Faculty members who were part of the Engelhard Teaching to Mission Conversation Series enjoy dinner with Fr. Jerry Hayes

One of the more important pieces of the conversation series was the facilitation that Joan Riley (Human Science) and Fr. Jerry Hayes, S.J., (Mission and Ministry) provided which helped her and the other faculty participants feel at ease nearly instantaneously. “[I]t was such a welcoming space, and people felt immediately comfortable to share,” said Turner. More than a year later, the relationships that Turner built through the series are still special. “I have had the opportunity to grow closer to these people, and when I see them on campus that’s a special dimension that we share,” she said.

Other than the relationships with fellow faculty she created throughout the semester, for Turner, the most insight she gained through participating in the series was the need for faculty to regularly make time for discernment. Turner noted that we often talk a lot about the importance of discernment for students, but we sometimes forget that it is an important tool for everyone—faculty, staff, and administrators alike—to use. “What’s helpful about the dinners is that they invite colleagues from across the university to talk about teaching and discern about teaching and what that means… [I]n finding that common ground, then you are in a place to bridge to other topics that are more personal,” said Turner.

Of course, bridging to the personal necessitates building relationships and creating community. Social and invitational presence (terms that Turner uses in her own scholarship) mean being mentally and emotionally present in ways that invite dialogue and connection. The dinners, Turner shared, created these environments. “We need more contexts in our busy lives for people to have conditions of safety, value, and freedom. We often are in situations where people might say something you don’t agree with. You could even find the comment upsetting. But the only way you can resolve this dissonance is to have the conversation.” The recognition that occurs because of these, sometimes difficult, conversations is what makes them worthwhile and valuable.

Why should faculty participate in the Engelhard Conversation Series? It ultimately boils down to the value of group discernment, said Turner. “There is not a person in the world who doesn’t need to better understand how to discern and what better group than the Jesuit community and what better place than Georgetown for that? Discernment should be our core competence—it is our core competence—and if it is we need to all be able to model that.”

To find our more about the Engelhard Conversation Series, including fall 2019 dates, please email us—engelhardproject@georgetown.edu