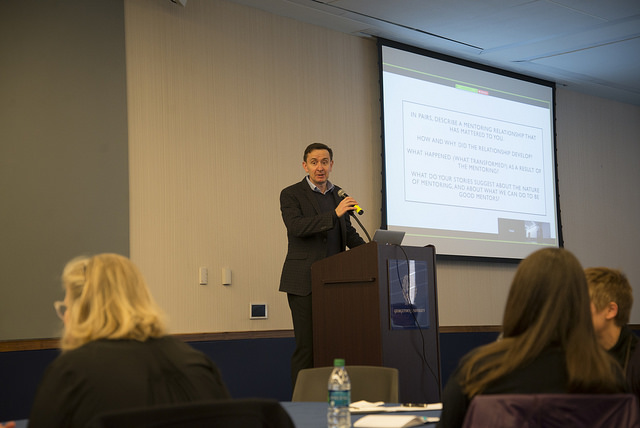 What is mentoring?
On  April 9, in partnership with Georgetown University’s School of Nursing and Health Studies, CNDLS hosted Peter Felten, Ph.D., Assistant Provost of teaching and learning and Executive Director of the Center for Engaged Learning at Elon University, as part of the Mentoring Initiative. He spoke of the importance and impact of mentoring students, and some of the small changes faculty and staff can make in their approaches to student communication that can have a big impact on student success.

Participants then broke into pairs to discuss their relationships with their own mentors. They answered questions asking: How and why did the relationship develop? What happened? Was it transformational?  Was it a positive change? What do your stories suggest about the nature of mentoring, and what can we do to be good mentors?

Felten remarked that he had found many of these characteristics in his research and in working with students at Elon University. Students reported that the most useful and empowering mentoring relationships came from instances when mentors lent perspective on students’ capabilities that the students could not see themselves. He also addressed some of the formulas for success in mentoring relationships, such as being consistent and honest about your own limitations as a mentor, and the importance of asking students questions, rather than just giving them answers.

Hurdles to Good Mentoring
Mentoring relationships can have complicated dynamics. Students are often aware of the inherent power inequality between themselves and faculty, and this can lead to a feeling of obligation or intimidation from students. In order to be responsive to these concerns, faculty interested in mentoring students might, for instance, allow students to approach them to form a relationship, while also being conscious that many students may not feel as though they deserve to ask for that kind of relationship. An important step in becoming an effective mentor is recognizing what the student thinks you can offer.

Students who could most benefit from mentoring relationships could be the least well-equipped to seek out a mentor. Good mentoring contributes to equalizing academic outcomes for traditionally marginalized and underrepresented students,. For example, first generation and minority students often come to campus with less social capital than their peers, and some of these students may carry with them the assumption that asking for help is inappropriate These students also often fear that if they do seek out a faculty member they will have nothing to contribute and will waste faculty time. Therefore, mentors should work on communicating that “good students ask for help,” and share the expectation that students should have relationships with faculty.

The conversation then turned to the particular needs of first year students, who are often more focused on surviving their transition to college than seeking out mentoring relationships. Felten observed that many first year students put their “identity in a lock box” for the first year, and begin to try on identities in later years. He noted that the end result of this is that students can sometimes be in radically different emotional, social, and mental stages, even though they might share other similar characteristics, such as year, major, and GPA.

Non-faculty mentoring
Mentoring relationships with students are not reserved for faculty Felten told an anecdote of one academic who made this discovery during a visit to a small university. As he walked around campus, he asked students, “Who is the person I need to talk to about what makes the education here so remarkable?” All of the students answered the same person, who he assumed was a professor. He wrote down in his notes, “We need to speak to Mesreeta.”

He later found out that “Mesreeta” was actually “Miss Rita,” the woman who served coffee at the cafe in the college’s science building They found that it was her warm, non-judgmental, open, and confident relationships with the students that had such deep and lasting impacts on students, and that all members of staff—not just faculty—have the power to be influential mentors in students’ lives.

Steps to Good Mentoring
Felten also shared some concrete practices. For example, Guided Reflection on Work (GROW) is a practice at University of Iowa where students meet with their supervisors twice a semester and go over these questions:

Saying-is-Believing is another system by which students write and share (out loud) a brief analysis or story that reinforces a growth mindset. Students often struggle during their first semester, so describing how they can be successful can give them “academic hope.” A sense of agency and a plan helps students be successful.

Offering constructive criticism can also be helpful in showing students that you have high standards for them and their work. Rather than just placating a student and telling them that they tried hard when they fail, explain to them that you both have high standards for academic work, and that this doesn’t meet them. Explain to them where these standards come from, why their work isn’t meeting these standards, and that they are capable of meeting those standards. Articulate that you know that the student is capable of meeting those standards and that you will support them in doing the work necessary to achieve their goals. Expressing faith in their capacity as a person without ignoring the flaws in the work is more effective than simply offering encouragement.

Next Steps
For the final break-out group discussion, participants were asked to think about what structures and incentives support mentoring in their context, and what authority and intimacy looks like. In response to a question about the balancing the current harassment culture, Felten emphasized the importance of directly and explicitly addressing these issues and clearly defining boundaries.

Felten also talked about the institutional barriers that sometimes stand in the way of good mentoring. Sometimes universities “Reward A and expect B” in terms of valuing your time and input in student relationships.

By the end of the session, participants in the workshop were able to consider their own teaching practices in a new light, discussing in small groups what they could do to develop or deepen their mentoring practices. Springboarding off of Felten’s lecture, participants brainstormed the ways in which their own teaching could be enriched through student partnerships and a consideration of the student perspective. Keeping in mind a nuanced understanding of the many institutional challenges that sometimes stand in the way of effective mentoring, participants considered ways in which the many benefits of strong mentorship could be brought to a wider portion of the student population and how they could begin to work toward cultivating a spirit of mentorship among their colleagues and throughout campus.