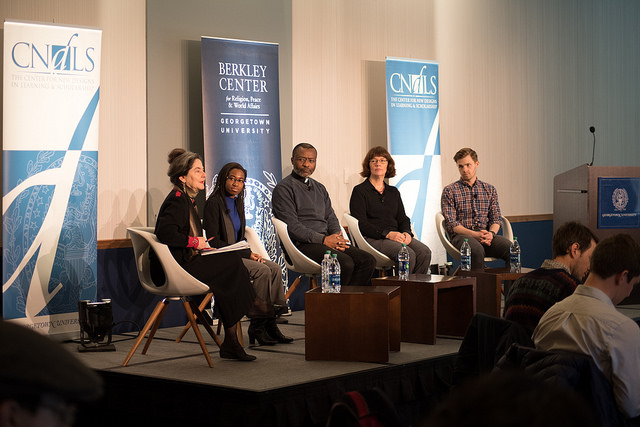 On Friday, March 16, 2018, the Doyle Engaging Difference Program hosted its ninth annual Doyle Symposium in collaboration with the Berkley Center for Religion, Peace & World Affairs. The symposium featured a diverse panel speaking on this year’s theme, “Teaching and Learning for Reconciliation.”  The panelists sought to explore the concept of reconciliation, both historically and as it is enacted in the present day at a local and global level, as well as its relationship to Georgetown University’s mission.

Balzer opened the panel with a brief overview of the cases to be covered including those related to pre-colonial Indigenous Peoples, the Piscataway, and others including Georgetown University’s effort to reflect on, engage with, and learn from its historic ties to slavery. She initiated the conversation by asking each of the panelists to describe what reconciliation means in the context of their research and activism. She then followed up with questions specific to each individual panelist. The panel then took questions directly from the audience.

In describing what reconciliation means to her, Austin discussed how she was first introduced to the topic through the book Radical Reconciliation: Beyond Political Pietism and Christian Quietism by Allen Boesak and Curtis Paul DeYoung. This led her to think about reconciliation as creating or recreating simultaneously a practice between God and self as well as between the self and others to repair broken or nonexistent relationships.

Upon discovering its historical ties to the institution of slavery, Georgetown University assembled Georgetown University’s Working Group on Slavery, Memory and Reconciliation to engage with and learn about Georgetown’s past and make recommendations to guide Georgetown in its ongoing work. Austin offered a student’s perspective on the Working Group, pushing the University to move past offering an apology and preferred admissions status and toward paying direct reparations to the descendents of the enslaved individuals sold by Georgetown in 1838. She also argued that the University’s reconciliation work needs to expand beyond the direct descendents. “I think it’s important to address the current students on campus, specifically the black students who have been impacted by the implications of slavery, which are present in society today in housing practices [and] criminal justice.” 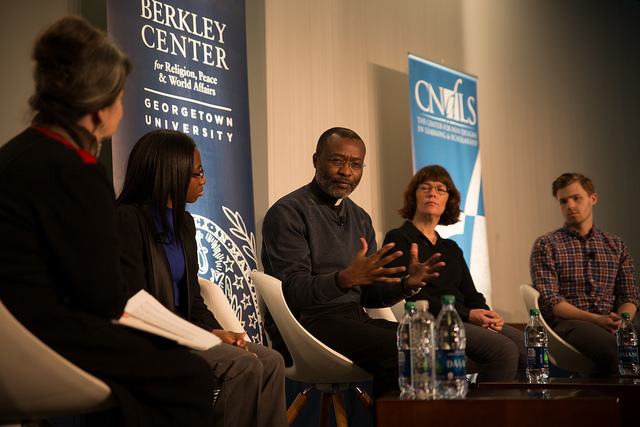 Lado echoed Austin’s thoughts about the personal, spiritual, and relational aspects of reconciliation. He remarked that working toward “reconciliation with the estranged” is written as a requirement in the foundational document of the Society of Jesus. However, he warned, “there’s always a huge tension between reconciliation and justice.” Justice, Lado said, is often a matter of identifying who is right and who is wrong, and meting out punishment and reward; reconciliation, which resonates with the African concepts of ubuntu, or unity, prioritizes the health of the community and a path forward toward making what is broken whole.

Suzack spoke from her experience working with the government-led reconciliation commission in Canada to provide recognition and redress to the tens of thousands of Native Canadians forcibly removed from their homes and enrolled in the Indian residential school system. Additionally she discussed some of the complexities that reconciliation faces in practice: the difficulty of sharing and reliving past suffering, the potential for the objectification of those experiences, and the fact that many communities felt excluded and argued that the agreement did not speak for them. Despite these difficulties, Suzack was clear that there has also been the opportunity for healing through the ceremonies and rituals that have been part of the reconciliation process in Canada. At one moving event she mentioned, attendees sang “Happy Birthday” to survivors of the schools, who had been denied such small joys in their childhood.

Reconciliation has also allowed the indigenous community of Canada to connect with other communities that have experienced similar injustices, such as South Africans who lived through apartheid.  “To my mind,” she concluded, “one of the goals of reconciliation should be coalitions, reaching out and working with other communities…racial justice is not self-evident, and the way to achieve it can’t always be looking backward, it has to look to a future.”

Walker addressed his own work at Georgetown on behalf of HeForShe, a United Nations initiative to encourage men and boys to stand in solidarity with women to promote global gender equality. He pointed out that those who are complicit in systems of oppression often seek reconciliation in order to receive forgiveness, which adds an additional burden to those who have been marginalized.  And he warned that too often, communities like Georgetown struggle to move from dialogue to action in effecting change.