On December 14, 2017, W. Brad Johnson, Ph.D., a professor of psychology in the Department of Leadership, Ethics, and Law at the United States Naval Academy and author of On Being a Mentor: A Guide for Higher Education Faculty and Athena Rising: How and Why Men Should Mentor Women, came to Georgetown to discuss the landscape around mentoring in academic environments. 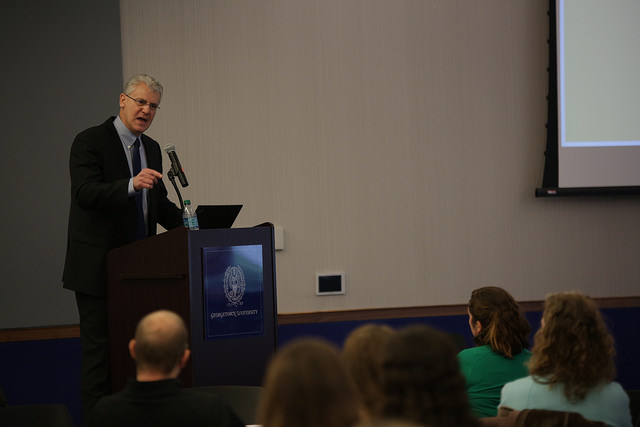 Johnson began by noting that mentoring often gets presented as a panacea. He noted that despite the fact that there is able research to support that undergraduates with mentors perform better both academically and professionally, and report feeling more confident, competent, more comfortable with their work-life balance, and achieve more imminent things in their professions, simply setting up an administrative “mentoring” program is not enough to achieve these results. Rather, Johnson emphasized that mentoring is a time-intensive activity, and only about 25% of undergraduate students reported that they felt as though they had a mentor – or even a professor who cared about them – during their entire college career.

What is a mentor, and how do these relationships take off?

Johnson prompted those at the tables around the room to discuss a scenario: Imagine two students come to your door and ask if you can be their mentor. How do you respond? How do you select the people to work with? Would you respond to these students in the same way? What is the best strategy for navigating this situation?

The situation sparked a number of conversations as many participants realized that they did have preferences for the kind of students they prefer to mentor. Continuing, Johnson explained that different methods of matching students to mentors come with their own unique pros and cons. In an institution that has a formal program to match people with mentors (as opposed to having students find their mentors organically), more students tend to find a mentor. In these formal relationships, there are clear goals and endpoints for the relationship, defined boundaries, and informed consent between the parties. Allowing relationship to form naturally can lead to stronger partnerships and fonder feelings—however, sometimes at the cost of a clear definition of the relationship. He noted that in these kinds of relationships mentors may not even be aware that their mentees regard them as mentors until they hear about the impact they had on that student years after their graduation.

On a similar note, Johnson also cautioned the room against labelling themselves as a “mentor” in these more natural relationships, and instead encouraged participants to wait for their students to assign them this title. After all, he noted, mentorship is a continuum. Many mentorships begin as more formal relationships—such as that of a research supervisor or an advisor—but as trust develops, a mentorship becomes more reciprocal.

How can you become a mentor, and who should you mentor?

Johnson noted that research indicates that spending time listening to your mentees is a top element of developing a successful relationship, and that carefully considering how you arrange your meetings is crucial to making students comfortable. For example, do you meet in your office, in a coffee shop, or in a bar? Do you meet at a time that is convenient for people with families, or in a place that alienates a certain type of student? He encourages faculty to consider the students that they already mentor, and ask themselves who might be missing. Do they mentor exclusively men? Exclusively people who mirror themselves? 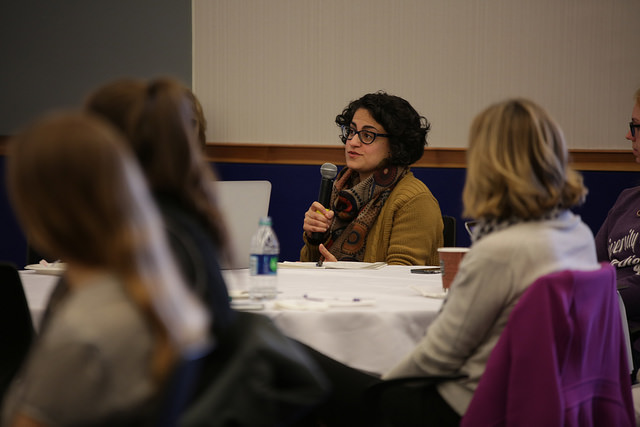 What makes for a truly meaningful mentorship?

Johnson also spoke about other important elements of being a good mentor, such as encouraging mentees. He noted that imposter syndrome is prevalent among students, so telling your students that they belong and practicing affirmation in your comments is an important part of being a mentor. Especially when mentoring undergraduates, Johnson emphasized the importance of being conscious of these students’ ongoing developmental psychology and student development – recognizing and having sensitivity to the fact that they are in a stage of emerging adulthood. Rather than pressuring decisions, a good mentor unearths “the dream” – a vision of what an ideal world would look like. A good mentor practices the “Michelangelo phenomenon”—a term in psychology to describe how the best partners work with each other. How do you draw out the best in your partner? Mentors have to approach their mentees with the same humility and unassuming nature as Michelangelo took to the block – he was surprised when Moses or David would emerge, claiming that he didn’t always know what he was going to create. Ask your students Socratic questions in moments of crisis – asking them what they think a solution to a problem might be or what they would like to do, rather than telling them or handing them advice. Being unconditionally, non-judgmentally supportive and approaching relationships with humility and a learning disposition is essential, as is validating a student’s own style, rather than cloning oneself.

Although mentors are not therapists, it’s also important to recognize that some students students come with unresolved issues – either rockstar students with a lack of confidence, perfectionist mentees with fears of failure, or students who approach the mentoring relationship as in some way reparative for another, more fraught relationship. Again, Johnson emphasized the importance of affirmation in these relationships. Be a champion for your students and affirm for your students that your investment in them and your assessment of their worth is not based on their performance, but on their effort. Ferret out the difference for your students between striving for excellence and striving for perfection, and be conscious in deliberately modeling healthy behaviors and mindsets.

Giving advice is not enough

Finally, Johnson explained that a truly meaningful mentorship is a combination of psychosocial support and career support. Sponsorship is an essential part of aiding your students, and helping them to network is essential. He also noted some implicit gender biases that sometimes comes into play, and noted that women tend get too much mentoring, and not enough sponsorship. He encouraged mentors to coach their students for interviews and help them polish their vitas. He noted that great mentors will create a constellation of mentors for their mentees and refer them to others that they don’t know.