Claude Shannon had a problem in electrical engineering to solve, namely, “the fundamental problem of communication is that of reproducing at one point either exactly or approximately a message selected at another point.” Though he uses the word “communication” what he means is “communications system design” (Irvine,4). Irvine draws the difference for us between E-information and information, where the prior refers to “the physical patterns of quantifiable units”, an engineering information perspective as opposed to the common understanding of information as knowledge/content/meaning (Irvine, 5). 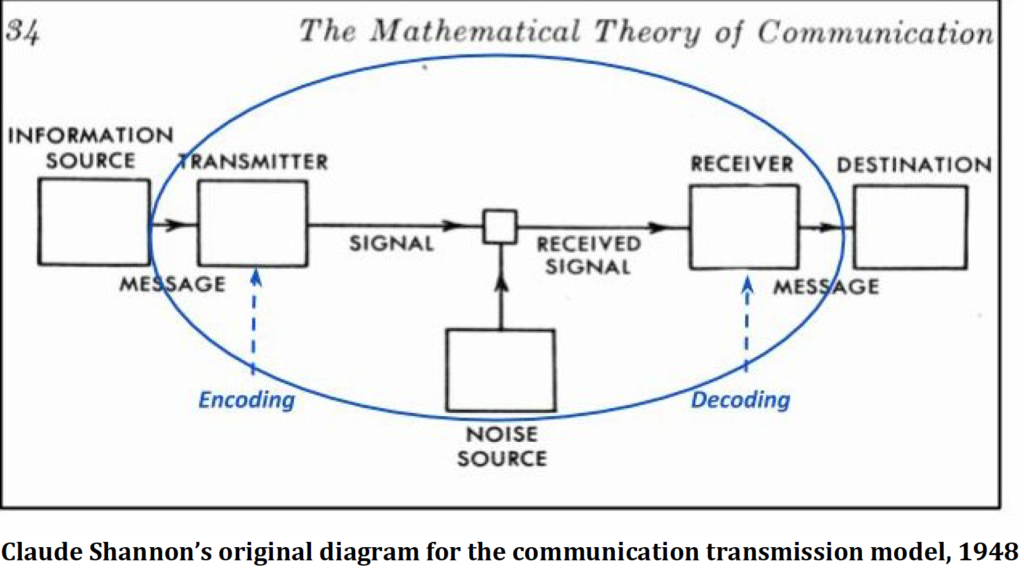 Shannon’s seminal paper “A Mathematical Theory of Communication” tackled this problem by understanding how to transmit signals from one place to another in a reliable way, such that the decoder at the other end receives the same unperturbed message as the encoder encoded.

The main components of his model are –

INFORMATION SOURCE – where the semantic meaning is composed

MESSAGE – where the semantic meaning is translated

TRANSMITTER – the device that transmits the signal

RECEIVED SIGNAL –  the encoded signal that is received along with some noise.

MESSAGE – the original message that was sent by the information source.

Shannon understood that the information structure had nothing to do with the content of the information and the simplest way to represent information potential is in bits – (yes and no answers that can generate 1 and 0’s corresponding to on-off states in a circuit.) i.e. if the transmitter from one end can successfully on-off certain switches on the other side via electromagnetic signals then that would represent a successful way of coding and decoding information, with min loss. (Denning & Bell, 472-3)

To this end he borrowed concepts like entropy – which would be the measure of the information and the entropy threshold would then defined the boundary between reliable and unreliable channels of signal transmission. (Denning & Bell, 473).

The signal transmission theory is useful when we consider it as a design intervention to the problem of signal coding. But the signal itself is a translation of our prior symbolic message. The engineering problem brackets out (to focus on its technical difficulties) the prior conception of the message. But when we look at the entire process as a symbolic cognitive technology, the chain roughly looks like this – cultural-social context – individual – intention- meaning – encoding – signal transmission -decoding – message reception – individual – interpretation and affect within a cultural-social context.

Martin Irvine, Introduction to the Technical Theory of Information as Designer Electronics