I will take Wechat, a mobile device app, as the example. Wechat is a social network app, which provides many kinds of services like instant chatting, sharing and browsing moments to friends and from friends, enjoying articles and videos published in the platform, and a series of paying operation. As Norman says “The only way to solve the complexities of services is to treat them as systems, to design the entire experience as a whole.”1 The designer of Wechat made all these services into a system, showing as four main interfaces in the app. In order to explain each specific function of these four interfaces, the designer used succinct symbols at the bottom of the interface to distinguish. First one is Chats; all the chatting banners are listed here. Second is Contacts; people can search the friend they want to chat with. The third interface is Discover; people can share photos, music and ideas in of the sections listed in the interfaces named Moments. Moreover, they can also enjoying videos published in another section. The last one is Me; people can manage their personal information and settings here. In addition, paying operation is also listed here.

These understanding symbols and titles distinguish these four different functional interfaces, which meet the principle of visibility, or affordances (or signifiers). For example, the symbol of text bubble guides people to chatting interface, and the symbol of a human head points to contacts. Moreover, the designer implemented the principle of feedback. When people choose one of the buttons, the interface will change to the related one and the button will become green. The changing of color is a sign that told people what kind of change they did and gave them a positive feedback that the app responded. The third principle that the designer applied in Wechat is mental models of conceptual models. When people receive a message from their friends, there will show a bigger red dot with number next to the text bubble. Red color is quite different from the green theme color of Wechat, and red is also representative for warning, so people will perceive the red pot as a sign of an important event. Moreover, if people receive comments or likes in Moments, the red pot with number will also show up next to the symbol of discover. However, if there is only a smaller red pot without number, it only means that friends update their new moments. Different kinds of red sign also make people perceive different level of urgency of messages. This design conform to that the mental model of a device is formed largely by interpreting its perceived actions and its visible structure. 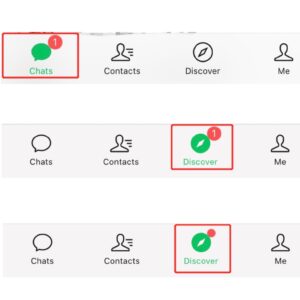 In the second part of the writing, I will try to deblackbox iPhone 11. In iPhone 11, each different function is compartmentalized by grouping and graphics1. It is a combination of tens of devices, including a mobile phone, a camera, an mp4, a game machine, a clock, a GPS, a facial identification device, a barcode and a QR code scanning device, and so on. Each of these functions has a application with a special icon designed according by their functions. For example, the icon for camera app is a cartoon camera figure. The design shows that the designer implemented the principle of affordance. In addition, since the icon is designed as a same shape like a real square button with others, which is the application of the principle of mapping, because the button like icon will guide people to tap once in order to open the app. Moreover, if a person taps the icon correctly, and the iPhone receive the instruction, the icon will become a little grey and then the application interface will fill over the screen, which works as a feedback to him or her. The designer made all these visible, so users will feel easy to interact with iPhones.

How could they understand user models if designers cannot let users try their products before they publish them? Whether it will be helpful to learn consumer psychology, or do some surveys? For many online games, developers will implement beta tests before publishing. In current society, will it be possible for products developers to do something like this?