Perhaps no company has mastered design as a product of systems thinking in the era of the Internet better than Jeff Bezos’ Amazon. Of course, Apple might hold equal rights to lay claim to this title, but more so than Apple, Amazon seamlessly integrates the ostensible world of material goods — and the social and economic practices which come with it — to the seemingly ethereal world hidden behind the screen. In other words, Amazon’s designed system incorporates interface design (and the programming implied therein), logistical design (both as an intermediary in shipping and between producer and consumer), and with the advent of products like Alexa or Echo, product and technology design. However, the aspect of Amazon’s design prowess which interests me most has nothing to do with any of this ecosystem of design, but with a small little storefront on M Street: the Amazon Bookstore.

In setting out to leave a footprint other than digital, Amazon faced the inverse design situation of most companies which pre-dated the turn of the century. Upon the advent of the world wide web, many companies asked questions about integrating their new online domain into their existing system or how to represent their physical manifestations on a new online interface. Amazon, however, existing originally as an digital company needed to design a method for translating the world of bits and bites into that of ostensible atoms.

In doing so, they designed a brilliant format for this storefront, which incorporates many affordances of digital media into the physical layout of the store. For example, the store foregoes the tradition of arranging books on shelves so that the binding faces outward — itself a design of another era of codices and readership — for the less spatially economical placement of books with the cover facing outward. As demonstrated below, this format retrieves the visual representations of books on an online platform or digital interface. 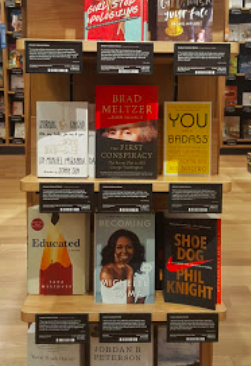 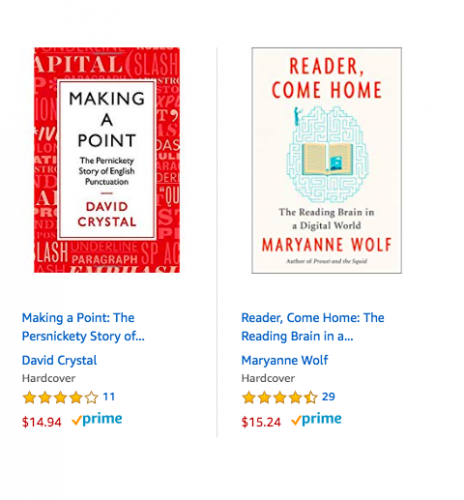 But perhaps this is simply a coincidence — not a choice in designing a system, but an appeal to the more banal impulse of the masses for visual imagery. It seems unlikely, however, in light of several other prominent design choices in the layout of this store. For instance, the choice to place reviews (all favorable, unsurprisingly) below the books on display. Of course, this calls to mind the affordances of interactivity latent online and the practice of reviewing products on Amazon’s online platform. My personal favorite aspect of the design of this store, however, is the prominent wall of books which display a sign noting “If you like this… you might like…” as shown below. 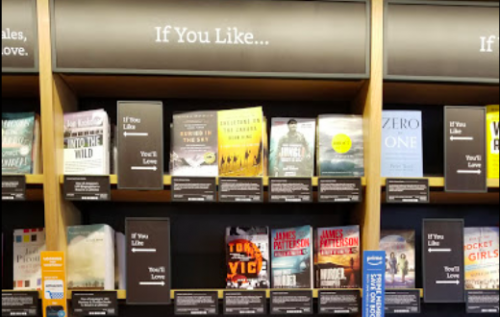 This flesh and blood retrieval of algorithmic processes brilliantly conveys the line Amazon walks between the designs of online interface and the affordances (or perhaps as they might see it, constraints) of legacy medias such as print.

I’m less interested in this design as any sort of ingenious breakthrough — while creative, it likely could be dreamed up by a number of people with a creative inclination — and more so in terms of what it means for design as a rhetorical device. While Norman is concerned with design and usability (a valid concern), design can also be used to send affective messages within systems and otherwise. Particularly when pushing one system to mimic the affordances and constraints of another, designs can carry messages and promote effects beyond even the scope of usability. I think Norman might even go so far to say that the real trick in the design of this storefront is in creating a system which is not only user-centered, but rhetorically clever and aesthetically pleasing.