As what Janet Murray mentioned in the book, all things made with electronic bits and computer code belong to a single new medium, the digital medium, with its own unique affordances. (Murray) In other words, a digital artifact can be considered as part of a medium with four affordances – encyclopedic, spatial, procedural, and participatory – more or less. That reminds me of how the Google Maps app is elaborately designed to involve users in.

Obviously, Google Maps displays an encyclopedic trait. Its database covers almost every country, state, city, and even every street and building all over the world. The type of services it offers range from location searching to route planning and navigation, as well as changing real-time traffic status. This show its unequaled storage potential far beyond the legacy paper maps. To some extent, the large amount of information included in Google Maps show its encyclopedic trait in the spatial layer. When the “time”, namely real-time information, is displayed in it, the map is a dynamic medium and is encyclopedic in the temporal layer.

According to Murray, the spatial affordance refers to virtual spaces the designers created that are also navigable by the interactors. (Murray) Its graphics users interface exemplifies the Google Maps as a spatial medium. To be specific, the searching bar, menus, and manipulable icons are all the examples. The concept of modularity, or black-boxing, and semiotics, or human symbol systems, we learned in the previous weeks can also be seen here. For instance, multiple specific locations are categories and folded into restaurant, bars, and so forth. When users want to find more about the restaurant nearby, the icon of knife and folk will lead them to what they are looking for. 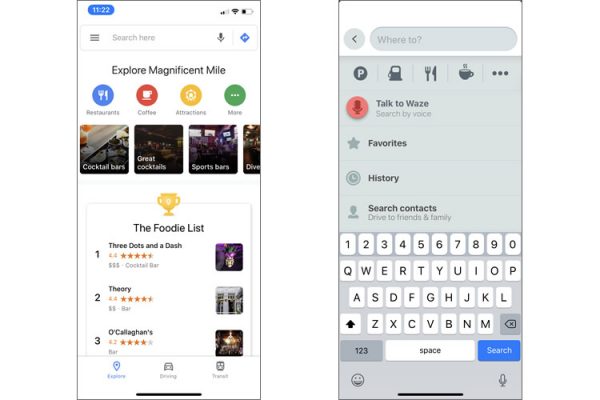 Furthermore, how Google Maps “teaches” users to use the app shows its participatory affordance, Murray said that “the designer must script both sides, interactor, and digital artifact so that the actions of humans and machines are meaningful to one another”. Also, Google Maps is the digital design which “is selecting the appropriate convention to communicate what actions are possible in ways that the human can understand”. (Murray) The blue dots show the user’s current location. The red pin shows the location the user is searching. Also, in real-time status, the red route shows traffic congestion, while the green lines show where is no traffic delays.

At last, procedural affordance can be seen when the users enter something ambiguous, in which case users will be led to relevant information based on some keywords. Google Maps also shows “no result” to deal with absent information.