General Manager of the Entertainment Planning & Development Division at Nintendo

All technology companies that build hardware rely on “re-implementable models of interconnected components and abstraction layers” (Irvine, n.d.). The Nintendo switch is an especially interesting case study in modular design because modularity is presented as its selling point! This is the case in both form and function. Designed as a recombination of existing technology, more specifically of Nintendo’s previous game consoles, it also markets itself as functionally modular for the consumer. But by looking past this surface level modularity there are a few design implications that should give any consumer pause before making a purchase decision.

See Nintendo’s announcement video for the console below emphasizing its hybrid nature. Pay particular attention to their emphasis on the adaptability of it “switch”ing between different play experiences based purely on the versatility of the hardware’s subcomponents.

As can be seen, Nintendo is essentially packaging a system of combinatorial components that afford a few differing experiences depending on their combination. Carry it around to play on the go, slide the controllers off for local multiplayer with your friend, and then plug it back into it’s docking station for the High-Definition Experience.

Additional components such as the touch screen on the tablet and the HD motion sensors in the side controllers leave the door open for other experiences such as mobile applications and/or Virtual Reality (VR). The company could also feasibly release new hardware to slide on to the tablet, future-proofing that combinatoriality just a little bit more.

This intentional modularity behind the design can set the agenda for experimentation and innovation as Nintendo attempts to compete with companies like Microsoft and Sony who have more conventional offerings and a much larger library of games. The competition builds their gaming hardware mixing and matching components into new iterations without drastically altering the conventional function of playing on the television. Because of this, they are able to offer more powerful hardware at a comparatively lower rate.

Management and Design theorists Carliss Y. Baldwin and Kim B. Clark note that “…modularity in design — an observable property of designs and design processes — dramatically alters the mechanisms by which designs can change” (Baldwin & Clark, 2000), and based on their messaging, Nintendo is banking on these mechanisms to close the gap between them and the competition. 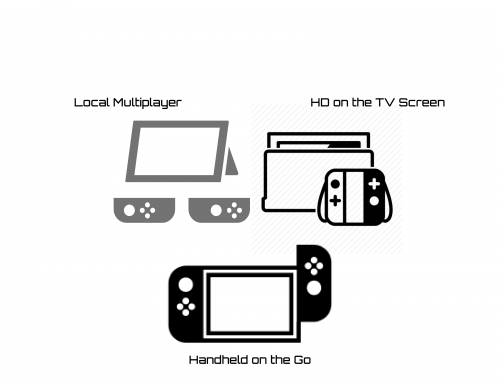 But this surface-level abstraction belies a product that also closes itself off immensely – posing risks to the financial investment of the consumer. By assuming the mobile form-factor, the device also takes on some of the inherent risks and constraints of a mobile device. Nintendo has designed the system with “people’s interaction models in mind” (Lidwell, Holden, & Butler, 2010) and that design choice affords both mobile play AND extended play sessions with a device that can be vulnerable to physical damage in both settings.

Drop the device just right and it’s done for. Play for more than a few hours while it is docked (see center component in image below), it may overheat and warp into a funky  new shape. In each of these scenarios the complete purchase value is at risk. A tablet-based design for the base console constrains the consumer’s ability to replace individual components due to its compact complexity to manufacture. They are forced to either replace the device entirely or go without buying a new one. Additionally, the extra peripherals and games are useless without it. not to mention expensive on their own merits. 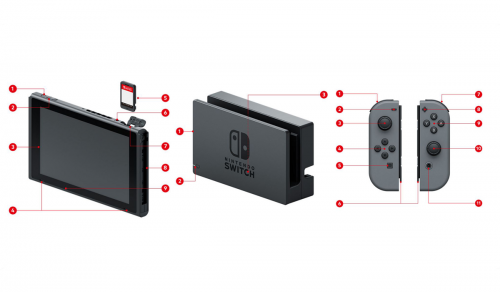 The decision to purchase a Switch vs. some other gaming solution then, presents a choice of values when it comes to modular design: modularity in function for uniquely varied play experiences, or modularity in form for lesser financial risk and a more conventional experience.