I recently started using Google Photos, an example of cloud storage service from Google that stores photos in “the cloud”.  Whenever I save a photo on a folder located either on my local hard drive or in a folder that I can see from my web browser, I see a notification on the top right of my screen indicating that it is being backed up to google photos, at which point I can access that image from any of my devices. In order to access these photos, I typically need to sign into either the Google Photos webapp in my browser or the standalone app on my mobile device. 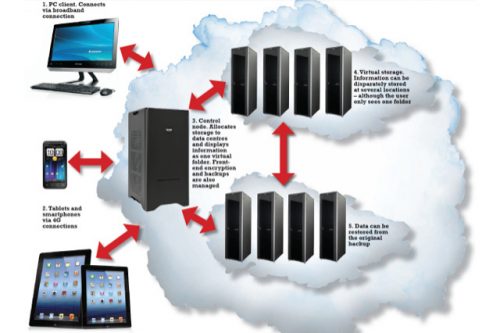 The process of syncing photos to the cloud via Google Photos is similar to other cloud storage services in general as seen in the image above. THrough a google photos app installed on my computer or mobile device, I grant permission for the app to actively manage image files saved locally, and those images are sent through the web via HTML protocols from my client device to a server located at one of Google’s data centers where it is allocated and stored across a variety of servers.

What’s interesting is how the internet affords the ability to both browse content this way, but also varying means of controlling that content through the growing use of apps such as Google Photos.

Addressing this extensibility aspect of internet protocols, Martin says that “The Web architecture and framework of HTML5 now also supports the function fragments in mobile apps…. Apps and mobile devices allow channeling and fragmenting internet/web architecture for commerce, consumerism, and maintaining the focus and attention of users.”

At this point I have thousands of photos backed up and it’s made my life so much easier in that google’s algorithms will sort everything, tag it, and make it searchable. Google says I can upload “unlimited” amounts of photos, offering infinite scalability for me to upload files over the course of my life. It offers anyone and everyone that option, in fact, they want anyone and everyone on the service. We can see this as an instance where Google is using a closed module to blackbox user activity on the open web. Corporations such as google can merge the affordances of a globally connected network, the internet, and funnel our activity and our content into closed services that they control.

Martin Irvine, “Introduction to the Web“

Cloud storage: What is it and how does it work? | How It Works Magazine. (n.d.). Retrieved December 15,

Jonathan Zittrain, The Future of the Internet–And How to Stop It. New Haven, CT: Yale University Press, 2009. Excerpt from introduction and chap. 1. Entire book is available in a Creative Commons version on the author’s site.