Flash cards have been a common tactic for many students to learn lists of vocabulary words and concepts. They are a quick way to test knowledge, and then flip the card to see how well they knew the contents of that card. Students can test themselves on any kind of content that can be drawn on the card, whether in the form of text, images, and/or color coding. Cards can be laid out on the floor, sorted and/or resorted into different boxes, and They can even be mobile, often stored in a small box or on a key ring. Grab a friend and they can easily pull out the cards and quiz you on your knowledge.

These perceived and actual action possibilities are what designers call “affordances”. They are what drive people to make and use flashcards. Software designers have sought to make money by translating these affordances into a digital format, with varying degrees of success. In some ways flash cards make more sense in a digital environment, but in other ways certain affordances are not as immediately perceived.

Don Norman, a leading thinker on the concept of affordances, said that “…affordances are of little use if they are not visible to the users. Hence, the art of the designer is to ensure that the desired, relevant actions are readily perceivable (Norman, 1999).”. In other words, if those affordances are not immediately apparent on the digital media display then the digital format for flash cards will not be very useful, even if they have many more applications and “usefulness” baked into their design.“Strong visual cues” are what indicate the potential uses on the screen, such as “clickable buttons and tabs,draggable sliders”, things that suggest actions and effects (Kaptelinin, 2013).

We can see some of these visual clues specific to digital flashcards. Take for example Anki, one of the more powerful flashcard applications. 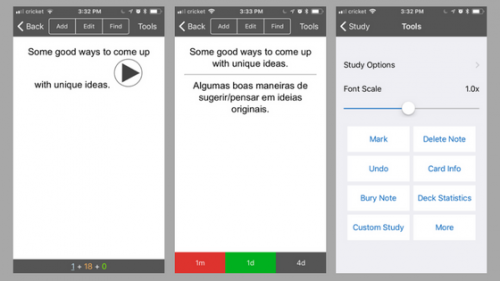 Within the above image, you can see three screens. These screens are images from an iphone where I’ve downloaded a flashcard list of portuguese phrases. On the first screen, I can immediately see that there is a “play” icon that lets me listen to the phrase being recited out loud. With a tap, the second screen reveals the answer, and I can indicate on the bottom whether I want that card to be repeated in 1 minute, 1 day, or 4 days. These lengths will change automatically through continued study of the flashcards, whether repeated success or failure, the software has algorithms that spaces the card to best help you learn the concepts. If i were to swipe the screen I can modify the card or its location through a slider and a series of buttons.

Paying attention to actual affordances, Anki is a superior offering to traditional flashcards. Within the confines of my phone and one screen, I can store tens of thousands of flashcards that can be spaced out for frequent or sporadic practice organically. I can embed audio for practicing pronunciation, insert images, even see statistics on how well I am progressing with certain terms or data sets.

Paying attention to perceived affordances, and it’s hard to see all of this value. It’s not immediately obvious that tapping the card will flip it to the other side. The spaced repetition algorithms offered at the bottom of the second screenshot are also not immediately obvous despite an attempt to indicate accomplishment through a color code. (Red for don’t know, so give it back in a minute. Green for so-so, give it back in a day or so. Grey for it’s solid, bring it back in 4 days.)

I love anki. It’s a powerful application to do a lot of cool things I used to use flashcards for. Many others, however, find it useless. I don’t blame them.