During my junior year in undergrad, a new minor was being offered, and that was a minor in Digital Media, and students had the option to choose that minor with an emphasis in Computing, Digital Communications or Digital Arts. The program that I had chosen to major in was Computer Science and it didn’t allow me to take a lot of classes outside of the engineering school, but I was always interested in other things like photography and design and arts in general, so this new minor was my perfect chance to study other interests of mine, and I choose the Digital Media minor with the emphasis in Digital Arts.

I remember the first few classes, we talked about this dichotomy of analog vs. digital and how these terms have changed and influenced professions that are becoming more and more popular today.

Now I understand that such dichotomy is not that accurate to use because media is so much more complex than that, and it’s part of our social-technical system. As Dr. Irvine mentions, sometimes we use the terms of digital media as objects, rather than artefacts, and we forget that media is a continuum system that can be designed to be used in different form and formats, which now days we say digital.

One of my interests is photography, and I always wanted to know more about it. Now days it’s so easy to take a picture. In most cases, you only need your phone to snap a photo, and there you have it, ready in seconds. You can download editing programs on your phone, change the filters, add some changes and now you have a second photo, which is a reproduction of the first photo, but with a few changes in it.

So, I decided to take my interest a bit further and take a class in Photography, and after talking to the teacher, I found out it was a class in darkroom photography. As I said earlier, today the process of taking a photo is so easy and going through a film based class was something very different to me, so I decided to give it a try.

As I found out, for a lot of years, the art of photography has been a chemical process, and the images are captured on a film, which is super-sensitive and it takes time (between 40 min to more than an hour) to develop just one image. You use different chemical solutions, a developer, a stop bath and a fixer, and then the film has to dry, so it’s a whole process of following a recipe, and it’s so easy to mess up. 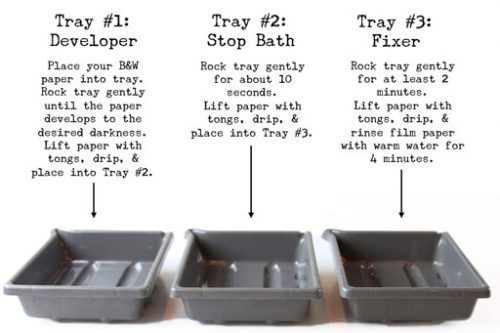 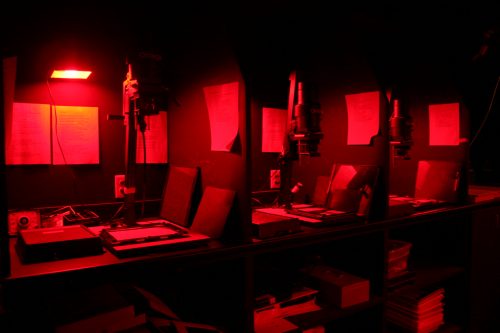 A darkroom to develop the film

Film photography is usually considered as analogue to distinguish from digital photography. As I learned, this had to do with the light meter which is considered an analog instrument. The light meter is also present on a digital camera, but you have the option to control the brightness and the amount of light in it.

The darkroom photography was one of the best experiences that I had, understanding how technology transforms from one medium to another.

Sure, I agree that digital cameras have made the process of taking a picture so easy, and you’re in control of all the elements to capture the perfect shot, but they have similar characteristics too.

In a digital camera the image is captured and stored in a memory card, and in the black and white photography, the image is “stored” in the film. For both, you have to understand the basic concepts of angle and light and distance from the object you’re trying to capture.

But a lot of advantages of a digital camera is that you have reduced costs, since you don’t have to go through the process of buying the chemicals and the film, you can just re-use the memory card to store and save the files from your camera to your computer and use it over and over again.

So, in a way, we are designing technology and digital media to make our life easier in the sense that we can have more control with the products that we’re making, but the beauty of a medium is that it can be transformed and evolved in different forms, but in a way it is never lost, and media in general is part our social-technical system. We can have new design elements and mediations but we have to keep in mind all sign, symbols and material are part of our cultural history and they will be used in one way or another.