Why have media-centric software applications and personal computing devices developed into what they are today versus some other way? What would the present look like had different decisions been made along the way? The full answer to these questions lies outside the scope of this post, however, we can peer into the thought processes of some of the key individuals to better understand them. Based on some of these examples, it becomes apparent that the collective direction of personal computing as a metamedium has developed from choices, and not by natural evolution. I appreciated Lev Manovich’s citation of Alan Kay on this topic: “The best way to predict the future is to invent it” (Manovich, n.d.)

Alan Kay and his team at XEROX PARC  helped establish this direction by making the design choice to consolidate media development applications within a unified framework. Lev Manovich describes how this combination afforded a vision “in which the computer was turned into a personal machine for display, authoring and editing content in different media, and how “By developing easy to use GUI-based software to create and edit familiar media types, Kay and others appear to have locked the computer into being a simulation machine for ‘old media” (Manovich, n.d.). These decisions set the heading for where and why we use software as a metamedium today, in particular when thinking about our personal computers and mobile devices.

We have been using Apple computers and devices as our running case study for how to de-black-box technologies and open them up to see the interwoven stories of design choices and functions. The Apple 1 was one of the earliest machines to economize our modern conception for the “personal” computer. But while the Apple 1 and its successors helped shift the industry toward this design concept, that wasn’t Steve Wozniak’s original thought process. In an interview with NPR, he commented on his mindset:

When I built this Apple 1… the first computer to say a computer should look like a typewriter – it should have a keyboard – and the output device is a TV set, it wasn’t really to show the world here is the direction it should go. It was to really show the people around me, to boast, to be clever, to get acknowledgment for having designed a very inexpensive computer. (“A Chat with Computing Pioneer Steve Wozniak,” n.d.) 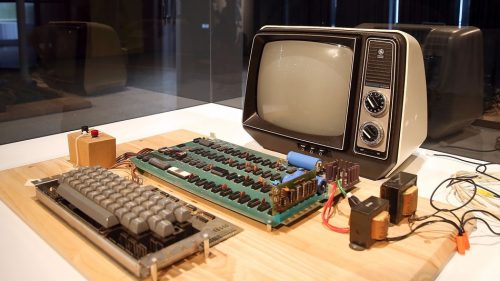 One of the people “around him” was Steve Jobs, who helped monetize and scale the Apple 1 as a package of pre-existing ideas based on pre-existing decisions. The Apple 1 and its successors borrowed heavily from the preceding culminations of design decisions as of Alan Kay and his team, and Kay’s team was able to synthesize their concepts from preexisting tools for technical mediation of media, which in turn stemmed from millennia of applied “old media”.

Rawlinson, N. (n.d.). History of Apple: The Story of Steve Jobs and the company he founded. Retrieved November 1, 2017, from https://www.macworld.co.uk/feature/apple/history-of-apple-steve-jobs-mac-3606104/