There is so much information around us. As Floridi puts it, Information is notorius for coming in many forms and having many meanings.  Over the past decades , it has been common to adopt a General Definiton of Information (GDI), in terms of data and meaning. That means that we can manipulate it, encode it, decode it as long as the data must comply with the meanings (semantics) of a chosen system, code or language. There has been a transition from analogue data to digital data. The most obvious difference is that analog data can only record information (think of vinyl records) and digital data can encode information, rather than just recording it.

But how is the information measured?

Claude Shannon, in his publication “A mathematical theory of communication”, used the word bit, to measure information, and as he said, a bit is the smallest measuring unit of information.  A bit has a single binary value, either 0 or 1.

When I think of information, I almost never associate it with data, but rather with meaning.  In a way, information to me serves the function of communicating a message. But, when we look at how is the message sent and delivered, is when we can see the data in it.

Now that we know the process, let’s take a look at Facebook, a social network that is changing our society.

Facebook was created as part of a class project at Harvard. Mark Zuckeberg, created FaceMash, a software that compared two photos, taken from the student’s directory book, and the user decided which of the two photos was hotter. The cite was shutdown a few hours, since it violated copyrights and privacy. After this, Zuckerberg created “The Facebook”.

In 2003, there were no universal online facebooks at Harvard, but only papers that held photos and basic information of the students. So Zuckerberg, had the idea to create an online directory, and that’s how Facebook started.

From this example, we see the change going from analog to digital, and we see the function and  meaning behind Facebook, which was to create an online directory of Harvard students. But today, Facebook has evolved and changed it’s meaning and function.

Today, Facebook is participating in polls of political campaigns; we’re sharing information from different fields with our friends; we’re connecting with people from all over the world; we’re texting, sending messages, photos, videos etc… 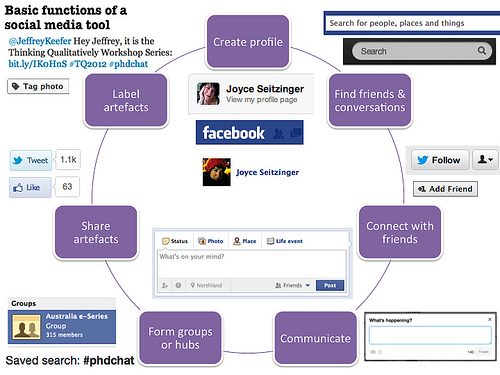 The process of sending e text message through Facebook

When sending a text, we have audio that confirms it  and a symbol that shows up.  When you send a private message including audio, video, to your friend, the message is encoded through the interface of your phone or computer, then message is sent through the wireless network or  cellular company to the Facebook database software. The message then is decoded and sent to your friends. This process is done in seconds, and you never think of the information and data storage that happens behind the screen.

The information age and digital revolution, has helped people to create and design different technologies that use different means of communication.

Gleick, James Excerpts from The Information: A History, a Theory, a Flood. (New York, NY: Pantheon, 2011)

Irvine, Martin Introduction to the Technical Theory of Information