Can Kindle be seen as “anti-culture”?

Debray mentions in the traditional western cultures technology is considered as anti-culture, while culture is experienced as anti-technology (n.d.). Books and texts are part of the society and culture which record all human history and human knowledge. It can be said that they are the core mediators of our social and cultural life. And so the question is what Kindle changes comparing to the original books? First, Kindle represents the technological advance: the irk electronic touch-screen. The art of paper-making technique was invented in the Chinese Han Dynasty in AD 105. And since then, people started to use paper to record historical events and human knowledge. The meaning of paper books is beyond channels of transmission, it’s a symbol of culture and human knowledge. And now, instead of the old paper-making and printing technology, Kindle applies the electronic and digital technology, and uses touch-screen. Second, Kindle changes people’s feeling about reading. When people are reading a paper book, they can actually leaf through those pages and feel the tactility of books. And they can take notes everywhere in the book as they want. However, for Kindle, they can only touch the screen to do the page turning, and people cannot actually ‘feel’ the book. Because of Balckbox, the customers and readers can just use the digital device, but they don’t know why and how it works. All those interfaces of Kindle are “invisible” to readers, and thusly readers will only feel this product very totalized and opaque. For those two reasons, Kindle might be considered as “anti-culture”. 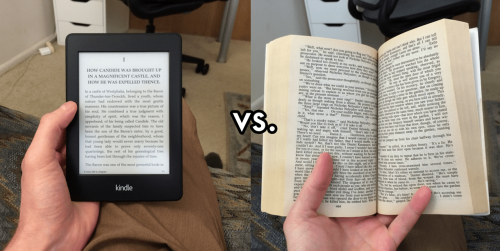 However, it’s not the truth. As Dr. Irvine mentioned in the video lecture, “E-books stimulate ideal features of traditional print books”. The power of a medium shouldn’t be found in its property. It’s not the paper-making technique and printing technology that fulfill books’ function. What’s really matter is the its core value. For books, they are the media that transmit human knowledge and history, and Kindle remains the function of book and make it more portable and flexible. Rather than saying Kindle, the E-books, destroys the paper culture and print technology, I would like to say Kindle remediates books and texts into the digital forms, but the core value and social functions remain.

In the socio-technical system thinking, culture and technologies are coproduced, and thus a co-mediation system formed. Some physical forms are empowered by its socio-cultural institutions and in return “mediate” their power. From the mediological point of view, the media is like a interface which connects to the other cooperating agencies, cultural institutions, social ideologies and even policies. In my own understanding, Kindle can be seen as a interface that mediate to other social-cultural aspects: Online shopping and space-managing thinking. The customers can only buy E-books online if they want to use Kindle, and Kindle also helps create a trend of online shopping. Out of the thoughts of saving space, Kindle was created. Comparing to the normal paper books, Kindle is more portable and flexible, it’s more like a mini library. And Kindle also provoke this trend of space-managing thinking, and now we have more digital devices that are more portable and space-saving.

Irvine, M. (n.d.). Working with Mediology and Actor Network Theory: How to De-Blackbox an iPhone.