A few years back, my 2012 Macbook Pro died, becoming nothing more than a the occasional bookend on my shelf. Because the screen had large cracks, I tore it off, meaning to eventually pull out the hard drive and recover some of my lost photos. I always thought it might be interesting to open it up and learn more abut how computers worked, however, it is interesting to see how doing so also opens up understanding for how the world works.

By disaggregating the various components that make up my headless corpse of a laptop, I can get a contextual view of the components not only within its shell, but also place those components into context within industry, research, and policy as well. Irvine explains the systemic nature of the relationship between technology and the world we actively live and operate, stating that “Any view of “technology” and “society/culture” that begins with the assumption that these terms represent real separate domains is false and can only lead to useless false dichotomies and erroneous analyses….” (Irvine, N.D.)

With newfound confidence browsing iFixit trying to understand these concepts, I decided to open my old bisected machine up: 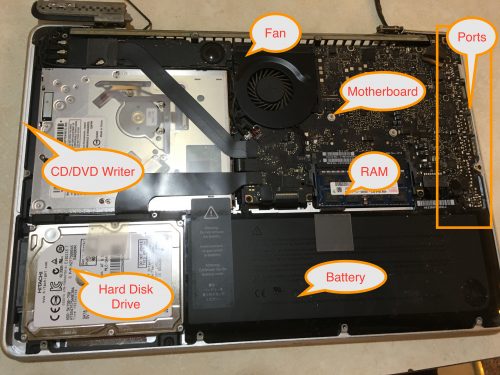 By examining each of these components on their own merits, and then thinking through how they work and why they work, those questions will lead inevitably into the required institutions, disciplines, and principles across a wide variety of domains. Each with their own stories to tell. This image in particular is significant because it demonstrates a transition from a reliance on discs toward a future more reliant on the combination of larger hard drives and faster internet speeds.

(1) The CD/DVD writer is all but forgotten now, but less than 10 years ago it was indispensable as a form of recordable media for students working, gaming, learning, or flirting with classmates (Back when we burned custom playlists for people). The technology had to be researched and manufactured, standards had to be hashed out turning it into the standard medium, and most computers had to be designed for the capacity to hold at least one.

(2) The Hard Disk Drive is basically a Disc housed permanently inside of that small box, vs the CD/DVD writer where discs are added and removed on a regular basis. For the 2012 Macbook Pro, models began to be offered with the choice of either a Hard Disk Drive like this or for the incoming “solid-state” drive, an advancement in memory technology that improved the speed of accessing memory significantly, with an eye toward a future where disc drives would not be necessary. Apple was already designing for a future where they could mass produce machines where the space required by a CD/DVD writer could be better optimized for other components.

In their book,”A Philosophy of Technology: From Technical Artefacts to Sociotechnical Systems”, Veermaas et al. state  that

“Technology is not just a collection of technological products, but it is also about how people, more in particular engineers, develop these products, about how people use them to meet their specific ends, and about how this all changes the world as we know it” (Vermaas, Kroes, Poel, & Franssen, 2011).

There are stories behind why these components were designed and combined the way they are as artefacts and within their socio-institutional contexts. There are even more stories told by how the ensuing affordances and constraints played out in individual lifestyles. All of these stories are not understood as well in isloation. Opening up technologies like my old macbook offers a more interesting lens for understanding the systemic narrative as a whole.