It always reminds me of my dad when talking about GPS. My dad literally never uses a GPS navigating device wherever he goes because he says that a driver with more than 20-years driving experience has already memorized every road in the city. However, the truth is that he often chooses routes with the heaviest traffic, or being fined because of neglecting the speed limit. The readings for this week truly make me confident to persuade my dad to use GPS. Cognition is not simply generated internally like human brains. Just as the habit in using handwritten to-do list, GPS is also a good example of cognitive artifact. As Norman states, “artificial devices enhance human cognitive capabilities and make us smarter.” The involvement of cognitive artifacts in this modern era changes the way we act to accomplish tasks.

The navigating function of Google Maps in iOS

Norman defines cognitive artifact as “an artificial device designed to maintain, display, or operate upon information in order to serve a representational function”. The feature of display begins at the very first step when typing in the address of the destination. Aligned with the located departure point, it displays several optional routes to choose from, with the fastest route recommended. While the user is searching for specific categorized destination, such as nearby restaurants, it accurately filters and displays results. As the navigation starts, only one chosen route maintains on the screen till the user arrives the destination, unless the route is manually cancelled halfway. We can see the operation feature during the entire navigating process as the cursor consistently moves according to the user’s real-time location. It operates because of the emergence of updated crowding, accidents, and constructions. Moreover, once the user adds stops along the route, the navigation operates accordingly and provides routes that cover all destinations. As a cognitive artifact, Google Maps is different from other artificial devices because it has a representational function that interacts with human brains, applying and mediating what we think, memorize, into visual interfaces. It represents our cognitive artifacts which make human cognitive abilities possible, visible and even powerful.

Norman’s classification of artifacts’ system view and personal view inspires me a lot in that it indicates that Google Maps, as a cognitive artifacts, is not just a simple artificial product. It involves offloads of massive cognitive thinking that people use it as a mediation to accomplish a task. From a system view, Google Maps is like a catalyst of human memory, aggregating thinking of map and enhancing the sense of direction. It helps keep the traveling record, show where the user is currently located. It also meets the user’s demand of expectations about real-time traffic conditions. Thus, “the artifact enhances cognition”. From a personal view, using the app can be treated as a task. Without this navigation app, we have to extract routes from memory and keep in mind of various cameras on the streets that we should pay attention to. With the app, it allows us to do little about memory. At this time, new tasks are assigned to us, that we should type in the accurate destination, change settings such as voice languages or distance units, and reading the routes carefully in order to have a better drive experience.

When reading about approaches of distributed cognition, it reminds me that Google Maps brought in the game Pokemon Go feature, allowing users to catch Pokemon according to the icons showed on the map. Since Pokemon Go is a game originates from Japanese anime, with a wide spread of culture, it has a large fan base around the world. In Distributed Cognition, Hollan, Huthins and Kirsch state that the study of cognition has tight connection with cultural study. Although the cooperation allows users to play this cultural characterized game with navigation on Google Maps, I wonder that will GPS navigation gradually be effected by the cultural environment and certain group members with the continuous information flows and integrations？ 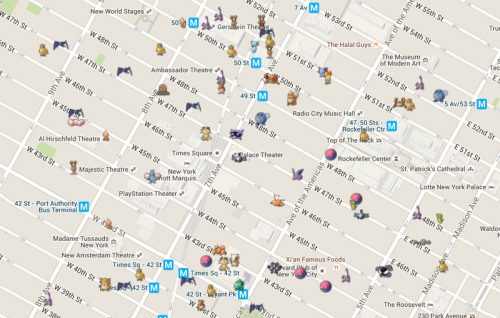