Using the web as a source of information and place of interaction has become such second nature that it is not often we stop to think of all the steps—one right after the other, at the speed of light—that are necessary for us to be able to open one website or perform a Google search. I would say that it is like a massive system of networked cables and antennas, technical standards, hardware and software, big data bases, and multimedia content is put in motion when we hit “Enter” after entering a query on Google that is meant to serve us a list of results , but it wouldn’t be the most accurate description. It is rather like when we hit that “Enter” button and obtain that list of results, we have actually entered an ongoing socio-technical process of information flows and political, social, economic, and cultural relations among both human and non-human actors across the globe that has kept that massive system active for decades now.

I use a Google Chrome browser to go on the web on my laptop. The way this browser has been set up is that I no longer need to go to google.com in order to do a Google search; I can simply type my query into the address space in the tool bar and hit “Enter” and it will recognize it as a such. This step-saving feature has also been incorporated in browsers such as Firefox and Safari, as shown in images below.

It is an example of an evolution of a user interface based on use. As more people rely on commercial search engines to start browsing information on the web, browsers developers noticed they could save the user the step of having to first go to a search engine’s site to then perform a query. While this small step seems insignificant, it has to be noticed that when I type google.com on my browser’s address space, a communication process begins between my computer and a network of servers, routers, and a big data system (the Domain Name System) that takes several back and forth ‘hops’ across a global network in order for m 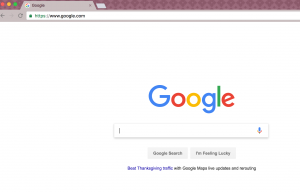 It’s true that this digital saga can take only seconds, if that, here in Washington DC. But connectivity speeds vary greatly across the globe and any mili-second that can be reduced from the process of a user searching for something on a commercial search engine—that is, from how easily the user can interact with the interface provided, how fast can it perform a query that provides her with the results she actually hopes to find, how fast can it serve a list so that the user doesn’t go away—can be of great value. Making the address space function as the window to the search engine directly saves time and keeps users happy.

In my case, once I enter a query on the address space of the Chrome browser, a communication process starts from my computer directly with the Google’s web server, there is no need to ask the DNS anything. As soon as Google’s server gets it, they run it against a different big data base, an index of search terms that has been continuously updating through Google’s crawling Googlebot for years and that it’s processed according to over 200 factors before serving me a result list.

It seems that this address space, created in the first instance as the tool through which a user would enter the domain name (that is, the name of the website, say, wikipedia.org) of the site she meant to access—either because she would know it or because she would guess it—has evolved through user and developer experience to become a more complex modular function. It is modular in the sense that it is made up of modules, “unit[s] whose structural elements are powerfully connected among themselves and relatively weakly connected to elements in other units” (Baldwin and Clark, 2000, p. 63). The weak links to other units in the browser are evident in the sense that the address space can be used independently of other functions in the browser, such as the bookmarks or the browsing history. But there are also less evident links established in this modular function.

As it can be seen in the image above, a known feature of Google’s search engine is the Autocomplete function, by which the search box provides the user with a series of potential search terms he or she may mean based on data Google collects on their past searches along with data collected about other people’s searches, including Trending stories. This address space then is made up of modules that not only combine more efficiently certain functions a user takes in a browser, but that also link it to databases of personal information on the user individually but also on Google’s millions of users collectively, as well as to algorithms that process these data according to user input.

The description so far has only reached the action of performing a search on a browser through its address space, and yet several functions, interactions, and connections can be observed. The browsing on the web we take for granted is part of an ongoing process of many flows of information that happen so quickly it is easy to miss them, but they reveal a lot about how many process actually take place on the web.