The Internet is known as a network of networks, or an inter-network, as showed in the video “There and back again: A Packet’s Tale. How Does the Internet Work?”, from the World Science Festival. Because users’ interface with the Internet is mainly the application layer, the transport, network, physical layers (Ron White, How Computers Work, 2007) and others are commonly not noticed even if there are signs of them around us. 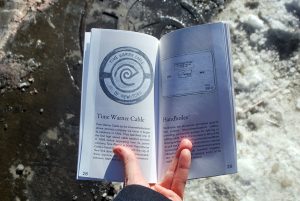 Before thinking of the large Internet, it is possible to think of Local Area Networks (LANs). A LAN is a group of computers, routers, hubs and other equipment that communicate to each other through a common language, the Internet protocol. The Georgetown network is a LAN. For the Internet as we know it to work, it starts in the Georgetown building (and in others around the world as well), and is dependent on the design of the TCP/IP (Transmission Control Protocol/Internet Protocol).

As White (2007), the TCP/lP break data into packets that are labeled with some identification and addressing information. As the video aforementioned shows very well, the packets then travel over a massive infrastructure and the distributed network until arrive in its destination where the packets are put together again to be readable and interpreted by the recipient machine.

Vint Cerf, one of the creators of the TCP/IP protocol, calls attention to its design in the foreword of the Great Principles of Computing (Peter J. Denning and Craig H. Martell, 2015). For him, this is the reason why the TCP/IP has become the main communication protocol of the network. The fact that application designers do not have to understand how IP packets are transported, and that at the same time, the protocol does not depend on the type of information in transit, have contributed to the wide diffusion of the TCP/IP and also to the stability of the network, even if it receives daily a multiplicity of new applications not initially foreseen.

For a network to connect to each other in order to transfer more than 100 billion e-mails or to allow more than 2 billion Google searches a day (Internet Live Stats, Nov 15), the physical layer is as key as the transport layer discussed above. To be connected, the networks need to be identified with  autonomous systems numbers (ASN), an autonomous system is thus a network administered by an Internet operator. Google, AT&T are examples of big network operators. When a user sends information through their Internet Service Provider (ISP), an e-mail, for example, that ISP is required to interconnect with other networks in order to deliver the information to the assigned recipient.

Although such operations are not visible to the Internet users, the interconnection is ordinary and essential to the Internet to work and is commonly privately administered by companies. This happens through commercial agreements, such as regular data traffic purchase and “peering” that is part of the economy of the Internet. In the example on the transmission of an e-mail, the ISP has two possibilities to deliver the information among the various types of interconnection agreements. It can pay to connect to transit providers, which will allow it to establish communication with many networks at once (the larger Internet). Or the ISP can opt to do “peering” with other Internet operators, sharing traffic and infrastructure, in a one-to-one basis, also referred as bilateral connections. In this case, both operators share the necessity of delivering data through the cables and other resources owned by the peer. Peering is, thus, a collaborative relationship that decreases the value of the connection due to sharing of resources, although it can also involve payments among the parts.

These connections are only possible through physical cables and structures distributed among countries. The physical distance among operators can have impact on both the cost of user’s Internet connection, due to more or less resources necessary to make the linkage, and the Internet quality, given that the more distant the operators are among them, the more subject to latency they tend to be.  Because of this, an important interconnection facility gains relevance within the network, the Internet Exchange Points (IXPs) – previously known as NAPs (Network Access Points), as it is mentioned in the World Science Festival video. IXPs, as the video briefly shows, are physical spaces in which numerous autonomous systems can connect to each other, including Internet service providers, transit providers, content providers, content delivery networks, and others. IXPs optimize the network and amplify the possibility of peering among the Internet operators. Once they become part of an IXP, they are connected to all other operators already in the facility, from telcos to ISPs, from banks to universities. IXPs approximate Internet operators without their cost of having to connect individually.

The Internet Exchange Map, a tool developed by TeleGeography shows the distribution of the known IXPs around the globe here: http://www.internetexchangemap.com/

From a socio-technical point of view, there are many aspects of IXPs that need yet to be understood. There is an unequal distribution among countries that generate infrastructural dependencies among nations – Canada and Mexico are highly dependent on the United States Internet infrastructure, as other Latin American countries as well. There are also questions about the complexity of purposes that these facilities have nowadays and the different meanings that such technological artefact has for industries, governments, users, even if only a few of those actors are currently engaged with this topic considered very well.