It is fascinating to read simultaneously this week about the history of the Internet and about how people in the United States are dealing with how applications of the Internet may have influenced the outcome of a presidential election in significant ways. In Computer: A History Of The Information Machine (2014), Martin Campbell-Kelly and William Aspray explain the evolution of the Internet and emphasize that when email was invented, it was not expected to be the “smash hit that it was” (p. 284). Indeed, the interest in the network of networks for communication among people was the big surprise that drove much of the growth of the Net.

Throughout its various phases of developments, the social aspect of sharing information with others and finding common-interest spaces continued to develop until the point in which we are now. Going from bulletin board systems to different versions of social spaces, social media applications are today the doors to the Internet for many people. In the US, “79% of internet users (68% of all U.S. adults) use Facebook,” according to the Pew Internet Project. And after the surprising result of the recent election, a debate has spurred about the influence of this platform in the shaping of public discourse.

In fact, Campbell-Kelly and Aspray mention that the ubiquity of computing really increased with mobile computing, which gave a great momentum to what they call “the phenomenon of social networking” (p. 299). In their concluding words in writing about the history of the Internet, the authors emphasize a really good point: there is an evolving dominance of “a small number of giants” (p. 305), such as Google, Facebook, Amazon, or Twitter, that are benefitting from a “systematic collection and use of personal data on individuals” (ibid). When we think about how we now interact with the socio-technical system that is the Internet, this has to be considered because these companies are now developing the software with which we do so.

As Manovich (2012) explains in his overview of software studies, “software has become our interface to the world, to others, to our memory and our imagination—a universal language through which the world speaks, and a universal engine on which the world runs” (p. 2). If we reckon the ubiquity of the Internet and the way we use, and then we reckon there are only a few companies writing the software “on which the world runs,” it is clear there is an issue if there is no accountability to them. As Prof. Irvine explains (n.d.), it is hard to explain what the Internet is because it is not one thing. As noted above, it is a socio-technial system, which means it is composed of several parts. In this memo, I focus on this one aspect, the software through which we interact with this system and with others through it, but this does not mean that other aspects are less relevant for discussion. In this case, the software through which we interact on the Internet is very relevant as has been evidenced by discussions this week after the surprising election results in the US.

It is worth noting this is not the first time a country questions the role of social media in the shaping of public opinion and its influence on national politics. A few months ago, a similar story occurred in Bolivia. A referendum would go to vote to decide whether or not the president could go to reelection for a fourth time, and the result surprised the president when it (barely) went to the No. Support for the president was thought to be a given. Both supporters and opposition to the referendum discussed how social media influenced the outcome. The former condemned its use calling them “tools of the imperialism” that only “collect garbage” and serve to spread “difamation and lies”; the latter saying they are tools to democratize access to information.

In both the US and Bolivia cases, election season was marked by a series of scandals that were spread, along with misinformation and malicious comment, on social media. And in both cases the results were uncertain and then said to be influenced by how conversation took place on social network applications. The difference was that, in Bolivia, social media apps were either taken to represent “the US imperialism” as a whole, or as a neutral platform. In the US, the presence of the company is starting to be clearer. Opinion articles now call on Mark Zuckerberg himself to find solutions to the problem of misinformation spreading and to at least acknowledge how echo chambers easily form in his platform (see for example the NYT or Vox). There is a call for accountability, even if Zuckerberg is in denial for now.

As Campbell-Kelly and Aspray rightly emphasize, “a platform dependent on voluntary sharing of personal information is highly dependent on not alienating users” (p. 302). Because this platform is run by a private company, how accountable it is depends on how much users ask of it. If users acquiesce to how the company operates through continued unquestioned use, these “small number of giants” don’t have an incentive to be more open about how they develop software. In Internet governance parlance, this is an issue of privatized governance of the Internet. How the Internet functions on its application layer is decided in private driven by private concerns. If we go back to the idea that the socio-technical system that is the Internet is of a particular kind because, as put by Prof. Irvine, “it is part of our long history of symbolic cognition, technical mediation, and communication,” it is clear that claiming accountability today is paramount. And given that the reach of these platforms is global, the accountability has to account for users in other countries in which information spreads locally. Do local interactions with information through the algorithms of social network applications vary due to contextual differences? This also has to be investigated by companies like Facebook if it is to get serious about how its algorithms influence public opinion.

Zuckerberg explains Facebook is a tech company, a platform, not a media company, and therefore does not need to be regulated as such. But the term platform is tricky when it deals with so many aspects of our interactions with the Internet. Through a systems-view of this socio-technical system, it is clear that an interaction with the Internet requires several layers of infrastructure, physical and virtual, to be in place. It also requires users to be in synch regarding how to communicate on this platform, for which a set of symbolic and cultural artifacts are put into play as well. When an interaction happens through Facebook, interactions among actors are activated through this “platform” in ways that must be acknowledged. In his presentation about why the term “platform” is tricky (The Politics of Platforms), Gillespie shows how by presenting themselves as a platform, a company like YouTube or Facebook can get away with several types of interactions all at once, as seen in the image below. There is interactions with end users, advertisers, media partners, lawmakers. 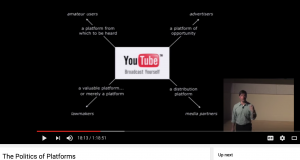 The history of computers and the Internet has developed in such a way that today they are part of our everyday (mis)understanding of the world. Still, while it is true that, also from a systems perspective, the socio-technical system that is the Internet is good in hiding its complexities, they are tangible and can be felt when they become problematic. As users of these systems, and as citizens who use these systems in symbolic ways that are part of our civic engagement, we have to find ways to continuously challenge the blackboxing of these complexities. If recent events in politics make anything evident, it is that demanding accountability from the “giants” is key.