In 2013, UNESCO launched its “Policy Guideline for Mobile Learning”, where they defined mobile learning as “the use of mobile technology, either alone or in combination with other information and communication technology (ICT), to enable learning anytime and anywhere.” They continue “Learning can unfold in a variety of ways: people can use mobile devices to access educational resources, connect with others, or create content, both inside and outside classrooms.” (p. 6) (emphasis added).

Interestingly, such concept has crucial correspondences with the Alan Kay’s personal computer prototype, the Dynabook. More than 40 years ago, when smartphones and tablets didn’t even exist, the underlined ideas above were already conceptualized. First, the main affordances of mobile technologies that we have nowadays are the possibility of using them “anytime, anywhere as [users] may wish” (Kay, 1972, p. 3). Second, the computer would be “more than a tool” (idem), it would be something like an “active book” (p. 1). Third, imagining some of the possibilities for the new device, Kay predicted: “Although it can be used to communicate with others through the ‘knowledge utilities’ of the future such as a school “library” (…) we think that a large fraction of its use will involve reflexive of the owner with himself (…)” (p. 3). Finally, Kay and his team imagined that personal computers would involve “symmetric authoring and consuming” – the creation of content by students aspired by UNESCO and its followers.

I already discussed the intellectual property constraints for expanding the metamedium potential of current devices and software in my previous post. I would like to expend some time now reflecting on the continuum v. disruptive characteristics of what we have now available in terms of hardware and software and what was imagined decades ago.

Kay’s devices draws from 1972 are similar to calculators with bigger screens and keyboard. Nowadays, there are some models of smartphones that keep such characteristics. The Blackberry is one of them, sold by 200 dollars. 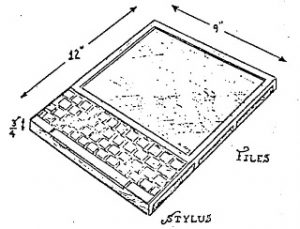 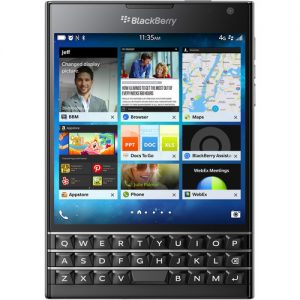 You can buy it here:

Nowadays, this kind of smartphone is not the most common, though. The keyboard, which used to be hardware has become software, accessed through a larger touch screen. Obviously, in the Blackberry model, there is a software to interpret the physical keyboard, but it is a “grey software” (Manovich, 2013, p. 21), not visible to the users as they are in the most recent models that have digital keyboards (e.g. iphones and others).

The migration from hardware to software brings the possibility of unlimited keyboard keys, that in my opinion, is not already well explored by designers. Some affordances of the digital keyboard are just copied of the physical ones, as when you press the key for a longer time and see more options. Additionally to it, they could have other layers of keys, and more configurable keys for the user to decide the punctuation signals, letters or symbols that hey should contain. For elderly people, they should also have configurable response level depending on how strongly a key is pressed. Many of them, including my parents, feel more comfortable when putting more force in their touch, which generates a lot of undesirable responses from the software (e.g. repeated numbers on the screen). The possibility of calibrating the software response in accordance to how intense the user’s touch is would help them a lot.

I understand that the more hybrid (Manovich, 2013) media are, the more disruptive they tend to be. For the author, “in hybrid media the languages of previously distinct media come together. They exchange properties, create new structures, and interact on the deepest levels.” (p. 169). If a specific metamedia intends to “remediate” (p. 59) older ones, such as an old map book turned into a digital map, it is easier to see the continuum line between them. Instead, when the digital map acquires other features and affordances, allowing the user to avoid traffic or police stations where police officers are stopping young people after midnight to check their level of alcohol, it becomes more disruptive. In my hometown, São Paulo, a very crowded city, many taxi drivers have become heavy users of apps such as Waze during hush hours. They don’t need to turn on the radio to know what other drivers are sharing about the traffic. They trust on the app. Similarly, young people have become more dependent on apps that allow them to know in advance where they can find police stations in their way to home, complementing the online communities that they have created to alert and notify members about the same issue.

Thinking about the continuum vs. disruptive tasks regarding photographs, while taking thousands of pictures using smartphones represents more of a continuum with previous non-digital tasks, the possibility of searching for photographs on Google through the upload of a similar picture is very disruptive. Also, the search for photos through #hashtags as allowed by Instagram is very powerful and a kind of unimaginable affordance some years ago. However, I see the domestic storage process of digital photos very similar to the use of old physical boxes brought to the living room when our family was visiting us, and I don’t know the reason for that.

In this way, the more hybrid and disruptive photo apps, digital books and other kinds of software become, the more changes we see in how we experience the world.