As you go up the escalators to enter the Hirshhorn’s exhibit “Brand New: Art and Commodity in the 80s,” you are greeted with three copies of Haim Steinbach’s billboard-like piece “On Vend du Vent” that are plastered across the wall. A rough translation of the French vinyl words is “we sell air”, which can be naively interpreted as meaning that everything and anything can be marketed and sold, including the air that is around us. Steinbach’s piece is at first impressive, due to the largeness and boldness of the letters’ font, and debuts the exhibit with excitement, enticement, and intrigue for visitors. This impression reflects the mood of the beginning of the 80s at the time, particularly in New York, when advertisement was on the rise and ads and billboards were seen as a source of inspiration — something that one looks up to. 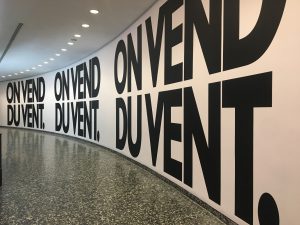 “On Vend Du Vent” is a first look at the themes of the exhibit: branding, commodification, the transformation of the every day into Art. While Steinbach’s work is grand in scale, another piece deep inside the exhibit provides a smaller, more subtle look at the themes: Peter Halley’s “Copies Simulated.” Peter Halley is a New York Based artist, writer, and teacher who contributed to the conceptualist art movement of the 1980s. This piece was a response to French sociologist Jean Baudrillard’s essay “Simulations” published in 1983. Baudrillard posited that the over-saturation of images (signs and symbols) presented to us have replaced what we view as reality (there is no difference between the copy and the original). At the time (the 1980s), art was reflecting these ideas in that artists were creating works that resembled commodities (to bring attention to consumer culture), resulting in a lack of distinction between art and commodity.

In Halley’s piece, the image itself is a copy of (reflection) reality, because the background serves as a mirror. The work itself is a framed black mirror with the words “copies simulated” printed in white. This piece asks the question: what is real? Is it the image you see in the mirror (a copy) or is it you, the viewer looking at the image? According to the description text, Baudrillard’s theory influenced many other artists of the decade as well. Along with Halley, Alan Belcher, Mark Stahl, and Jennifer Bolande were featured under this category of simulation art. All of them were responding to the conversation about the relationship between the object and the image referenced by Baudrillard. The description states, “Halley hints at a world in which, not only are the images and objects we encounter copies of reality, but those copies are represented to us through constructed images.” The simulation of “reality” shown in the reflection is mediated through the Halley’s constructed image. 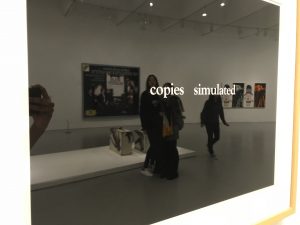 The mirrored effect of the work added an interesting layer to the reception of the work by viewers. Many museum-goers took a selfie using their camera phone (another black mirror) — it is notable that you can’t take a picture of the artwork (head on) without being a part of the reflection. In the image being constructed by the phone, the reality of what is seen has now changed to add the additional people within the gallery space, the person taking the photo, and the other artworks in the background. In the context of the present day (as opposed to the 80s) this idea of the art itself as a simulation is accompanied by the idea of an additional layer of reality: the reflection shown through the camera phone lens, which adds to the current conversations around social media and art. As we continue to add layers of mediation, the question “what is real?” continues to have new meanings and new answers. 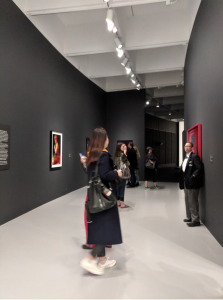 This idea of copy and simulation is in the structure of the exhibit itself. The unique nature of the Hirshhorn building is that repetition and circularity are quite literally built into the space. Though the exhibit is chronologically arranged, as you walk around the full circumference of the building each room takes you closer to where you were in the beginning. The design of the various rooms, too, echoes the themes of the exhibit. While the first several rooms are quite close to the “white cube” approach to a gallery space, at several points you turn a corner to find that everything has been inverted: the walls are a deep dark gray, the space much narrower, the space drawing you close instead of giving you (and the artworks) room to breath. It is not a rejection of the white cube, but a reinterpretation: like the pieces within, it is both familiar and unfamiliar.

The other artworks carry on these themes. Visitors walk through the exhibit and many pieces seem at a first glance to be “cool” and “fun,” but as you get closer to the pieces, an eerie and disturbing mood sets in. Pieces hold a darker underside: Joan Wallace’s pool ladder-turned-hangman’s trapdoor, or Jenny Holzer’s incredibly Instagrammable handbills that, upon closer examination, shout “hot, flaming, nasty things” at the reader.

The exhibit highlights consumer culture in America, particularly the ubiquity of billboards and advertising and the rise of commodification. Anything and everything in 80s America can be and is considered a commodity: from laundry detergents and furniture to individuals through self-branding. The pieces are arranged to critique and highlight the dark side of consumer and TV culture. For example, the TV culture room — consisting of a dozen televisions that display looping footage of news, logos, and products — hypnotizes viewers due to the absence of light, and then proceeds to sedate them as the audio simulates a broken record (repeating certain words, the overlap of audio). The room becomes a commentary on the consumption of television, and how media and 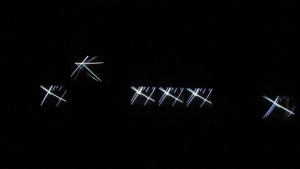 television inculcate consumer behavior among viewers.  The penultimate gallery then shows that television not only turns its audience into consumers but into apathetic consumers: a small television set, on which is printed the words “PEOPLE WITH AIDS”, running footage of professional figure skaters performing a dramatic and emotional routine to Dalida’s “Je Suis Malade.” Although the performance at first demands a reaction from consumers, when played in repetition, it ultimately desensitizes the viewers.

By the end of the exhibit, the light sense of humor has faded and the dark undertones have settled: advertisements, television, commodities are everywhere you look. The circular space mimics an endless loop: consumers cannot break the loop until they’ve consumed all advertisements, all billboards, all texts, and all pictures. The exhibit ends up overwhelming visitors. In the end, you are right where you started, farewelled with the greeting sign “on vend du vent” once again, which now takes on a different meaning: that everything that is marketed and sold — and the satisfaction that derives from its consumption — is ultimately fleeting, temporary, and short-lived.