He Kills Me by Donald Moffett 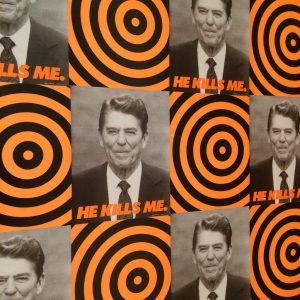 What do the terms “the 1980’s” and “art and commodity” mean in the context of the artworld?

Like every decade, a lot happened in the 1980’s in every sphere– social, cultural, and political– that influences how we think about the decade when looking back today. Some of the most defining elements of the decade include:

The artworld can reflect the 1980’s by tapping into any of these defining elements and more. We saw this in the exhibit at many moments: I feel like one of the most explicit instances of this trend was He Kills Me by Donald Moffett (1987). This piece consists of Ronald Reagan’s face aligned several times next to pictures of a vortex and the caption “He Kills Me.” This setup connects us to the ‘80s immediately; we are looking at the decade’s dominant political figure, and receiving commentary on one of its signature crises. The message here is that this was a deadly epidemic that the AIDS epidemic was a deadly one which the government did little to resolve, and may even have aggravated. Such a statement makes this piece a strong example of the artworld and the 1980’s interfaced.

I think of a “commodity” as something that is widely available and sold at a base value. So, the exhibit’s theme of “art and commodity” can be seen in its dominant theme of consumerism. Having artwork made out of painted pasta, TV sets, living room furniture, etc. reflects the theme of making art, and by turn spinning social commentary, out of commonly sold and purchased items. AIDS, although obviously a disease and not a commercial product,  can perhaps be interpreted as a “commodity” in the sense that it was widely circulated during these years and affected its victims indiscriminately (despite the myth that this was a “gay plague” which no straight person had to fear).

This website about the exhibit supports this interpretation: “For the first time, art and commodity conflated, with everyday objects such as vacuum cleaners, clocks, tires and drums becoming contingent channels for storytelling rather than stand-alone works.” I’ve definitely seen a lot of such artwork at many modern art museums (“Next time I come here, I’m gonna bring my garden tools, I’ll make a lot of money,” my dad joked at one such exhibit we visited together). But to have such artwork made by a collection from artists who were active in the ‘80s (many of them within the East Village in New York City, an area often associated with the ‘80s AIDS plague) really creates a genuine liaison to that decade and generation.

In order to “interpret the reception context” of Donald Moffett and He Kills Me, I suppose we would need more historical information as to how they were received or imitated in the long run. What kind of scholarship exists about Moffett and his catalogue, this piece in particular? Have any contemporary artists cited them as chief influences? That would allow us to assess the cultural and academic response to the work on display in this current Hirshhorn museum exhibit. I would also like to compare this work to the many other pieces inspired by the 1980’s AIDS epidemic, so as to get how other artists have responded to that plague in similar or different ways than Moffett did. 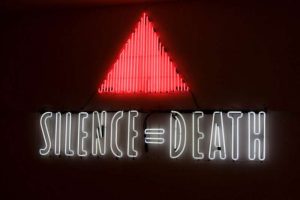 Today, 30 years into the HIV/AIDS epidemic, the vast majority of young Americans today  might view the AIDS crisis—when deeply entrenched homophobia and government neglect contributed to the deaths of tens of thousands of Americans—as remote and foreign. Most of them have never known a world in which being HIV positive was not a chronic but manageable medical condition. Many of them also grew up in the midst of advances for the mainstream gay rights movement that seemed impossible a generation ago.

From the beginning of the 1980’s, the AIDS epidemic became an increasingly present phenomenon, entering the work of many American artists in various ways and changing the art world greatly. Artists at that time created artworks are in response to the AIDS crisis and the ensuing stigmatization of LGBT community. Some artists and visual provocateurs who experienced the AIDS epidemic from the first hand were closely connected to advocacy group ACT-UP (AIDS Coalition to Unleash Power) to fight this disease in the form of political art and activism. 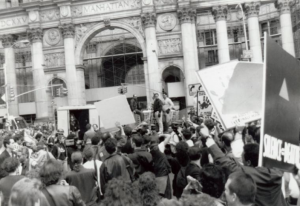 An ACT UP protest rally in front of the Manhattan Municipal Building in 1989. The group’s logo—a pink triangle with the words “Silence = Death”—is visible on the sign at right. Manuscripts and Archives Division, The New York Public Library

Gran Fury was a groups of artists and their SILENCE = DEATH graphic defined the AIDS/HIV activist movement in the 1980s and early 1990s. At the very first glimpse, this two-color neon sign which consists of a right side up pink triangle  on a black background with the text “SILENCE = DEATH” is very eye-catching. To be honest, the work of art do reminds me of dark side of the moon album cover of Pink Floyd , which was released in 1973 and has became an visual icon for Pink Floyd itself. 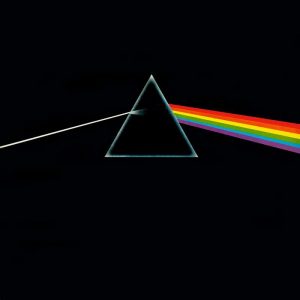 The Dark Side of the Moon, Pink Floyd

I think in a similar way, Gran Fury used the power of graphic design and advertisements : the slogan “SILENCE = DEATH” and big triangle, to increase understanding and compassion towards the disease sufferers and ire towards the disease itself. They also used a myriad ways of public expressions such as t-shirts, posters, stickers, banners, billboards, and video to get the message through. AIDS epidemic hit like a nuclear blast and Gran Fury’s advertisements were blasted all over too. The emergence of AIDS have transformed contemporary art in a way of bringing art closer to politics and real life, changing the dominant self-reflexive art practice. 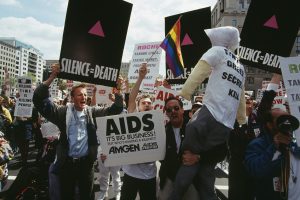 I shop therefore I am : The invasion of consumerism 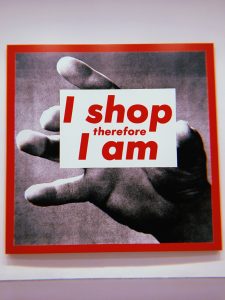 The theme of this exhibition is called Brand New: Art and Commodity in the 1980s, where i felt like Barbara Kruger’s artwork “I shop therefore I AM” really match the topic and has delivered many different meaning to the audience. A postmodern art which reflected the society’s condition that in favor of materialism and the rising consumption.

The artist Barbara Kruger herself is well-known for her photo-based images overlaid with blocks of text in a signature color scheme of black, white, and red.  Her practice of culling and editing found photographs and of pairing them with phrases in provocative ways was informed by her interest in feminism and critical theory.  I think she started the trend which is still ongoing today, where the influence of mass media toward people’s daily life, the effect of brief and powerful slogan that reflected people’s thinking in the given context.

The photolithography and screenprint technique that Barbara used is the way of expression that could be duplicated and printed in many different formats including book, magazine, and compact disc covers to matchbooks, coffee mugs, and shopping bags” which brought art to a wider range of audiences.

This artwork specifically, expressed the message of the consumerism in the 80s. In fact, the phenomenon of consumerism does not just immerse in the 80s, but still is leading the society today, in 2018. Thirty years till now, her artwork gives representation to material consumption and make people reflect and examine the society. It can be seen as the word that challenges the notion of consumption as the meaning at the 1980s, as well as a challenge for the audience perception. It is definitely a simple artwork with its main highlight of the words. I like this work since Barbara is open a new insight into the form of art that present to the public, it can be closely addressed with people’s daily life and straightforward to make you reexamine yourself. Ironically, the artwork was printed onto thousands of shopping bags, t-shirts, and other products of consumption which is really interesting to think about. Yes, consumerism is invading our lives, unstopping. 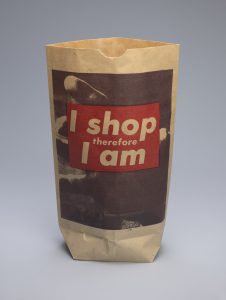 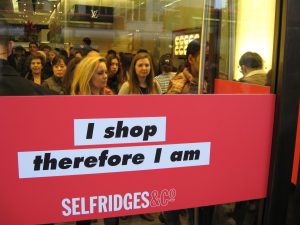