The invention of photography, in the middle of the 19th century, caused many painters to consider that this signed the end of their art. When he saw the first daguerreotype, the French painter Paul Delaroche said this: “As from today, painting is dead!” Painters whose work consisted of the production of life-like images to satisfy, generally, the egos of their customers, could see that photography was a far more efficient and inexpensive way of achieving this. Another commentator of this period had this to say: “Photography is so rigorously true to optical reality that it is likely to destroy individual conceptions of beauty.”

This last remark was proved to be not true, as was soon shown by the work of the impressionists who went inside immediate, superficial vision to investigate how images, and particularly colors and shapes, are perceived by the eye and the brain. And many art movements since then have taken this much further. As for aesthetics, or perceived beauty, we have since seen just how much this lies in the eye of the beholder (or, to be more cynical and in respect to some contemporary art, in the pocket of the investor), and how impossible it is to set hard-and-fast criteria for beauty.

The realism of photographic images was also criticised from the start precisely because it was too realistic. This precise reproduction of what people really saw in the world around them kind of blew apart the hypocrisy of constructed, often idealized images of what people wanted to see, as in this nineteenth-century painting by Bochereau. And of course the same can often be been said about portraits prior to photography, with many very notable exceptions of course. Photography not only opened up new fields for painting to explore by removing the responsibility for slavishly realistic reproduction but, especially with the invention of films, it also profoundly changed our way of viewing things. Vision has never been the same since. The impressionists, like Monet, could do things like this: 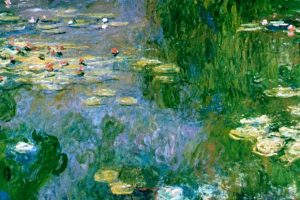 What Monet showed was that vision was a continuum that ebbed and flowed and not a fixed snapshot. One could attempt to catch an instant of it, but that would merely provide an “impression” because capturing reality is an illusion. Reality is there, whether we look at it or not. All we can do is to create our impression of it and of its impact on our senses and emotions, as Lucien Freud said.

A little later, the Cubists would de-construct the traditional single viewpoint to encompass many perspectives in a single painting, something later investigated, perhaps with more finesse and in another way by the English painter David Hockney. He used Polaroid images of the same subject taken from different viewpoints that were minute variations on a theme, just as one’s two eyes, combined with the movements of the head, will produce small differences in the vision of a subject.

So I don’t think art is concerned with the imitation of “real” life. Bonnard had this to say on the subject in the early part of the 20th century: “The question is not the painting of life, but making painting come alive.” Art is concerned with human imagination, and the juxtaposition of elements that may or may not be perceived directly in visual reality. The act of painting imposes choices on the painter, and these choices will constantly be confronted with the constraints of executing these decisions.