Our linguistic tendency to say we are “taking a photograph” indicates that we are simply making a “quotation from reality” as Irvine states (p. 3). However, any (pre-digital) photograph “is a product of a chemical process that captured and fixed the light reflected off an object into an image of that object” (Peres & Osterman, 2007, p. 180). In the image below, Tato’s work falls into the genre of Fantasy and Surrealism as he wanted to show the “state of mind” of an individual. According to the Guggenheim, Tato’s photograph dealt with the “Futurist concept of simultaneity through the transparency of objects and the transfiguration of the real. He said he sought to achieve “a new reality which has nothing in common with reality” (Guggenheim). In this photo, Tato depicted his friend who as a aviation enthusiast by using multiple negatives and photograms to make the propeller show movement. 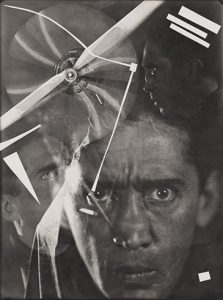 “A photogram is a kind of photograph, although made without a CAMERA or LENS. An object (or objects) is placed on top of a piece of paper or FILM coated with LIGHT-SENSITIVE materials and then the paper or film is EXPOSED to light” (Balwin & Jurgens, 2009, p. 39).

With Tato’s photodynamism, the distinction Ansel Adams made between “taking a photograph” and “making a photograph” is clear. One could not go out into the world and capture this image; it was constructed with the iconic code of the face and the indexical code of the propeller indicating movement. Within the process itself lies the symbolism of multiple layers of the “state of mind” of the subject.

Although this photograph is not a depiction of reality, it shows how creative minds were experimenting with this ‘new’ medium. Tato “declared photography to be a powerful tool in the Futurist effort to eliminate barriers between art and life. With the camera, they could explore both “pure” art and art’s social function” (Guggenheim).

Jumping forward a half a century, I chose a photo that showed movement in a different way. Taken at the 1992 Olympics in Barcelona, an athlete is depicted mid-dive with picturesque shot of Barcelona in the background. After years of decay and neglect, Barcelona had been undergoing a self-reinvention and hosting the Olympics was a chance to showcase the city as modern and thriving. Recognizing the power of photography to communicate messages, city planners gave photojournalists the best seats on top of Montjuïc so that the athletes were not the only thing people were talking about. In the distance, you see the iconic Sagrada Familia giving us an “aura of authenticity” (Benjamin, 1936) and creating a reference for the viewer. 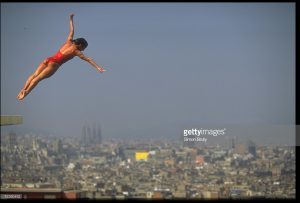 Photography in the genre of photojournalism functions “as a means of freezing a moment in time” and giving us a trace or testimony to “the actuality of how something, someone or somewhere once appeared” (Wells, 2015, p. 19-20). Barcelona had not been not been seen for many years as a result of Franco’s dictatorship, so showing that the city was alive and thriving was an essential step towards the Barcelona we know today.

This chemically produced photo is indexical in that the athlete had to be there for the photograph to be made, making the image a ‘trace’ which would “circulate in specific cultural contexts within which differing symbolic meanings and values may adhere” (Wells, 2013, p. 53). Photojournalism’s social function was based on the “claim to be the people’s witness, the dispassionate relayer of factual truths for the benefit of distant viewers” (Lister, 2013, p. 185). In this case, photojournalists were able to mediate the experience of the Olympics in Barcelona. 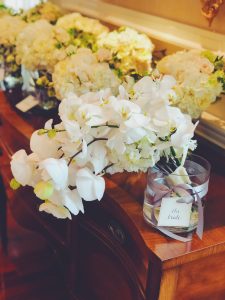 A Work of Art by Catherine Boardman

This last photo of my sister-in-law’s bouquet was my own work of art, though portrait-mode on the IPhone X really deserves the credit. If Lister (2013) were writing in 2018, I believe he would argue that Hipstimatic had a minuscule impact on professional photographers, but that innovations in IPhone cameras – like Portrait Mode – pose the biggest threat. Having been newly immersed into the wedding world but a veteran in the Instagram world, algorithms constantly present me of photos from other weddings.

Almost every collection of wedding photos I see are almost exactly interchangeable – each bride wants the same token cliché moments captured. There are the black-and-white “first look” photos, the fake candids, bridesmaids smiling, bridesmaids looking at the bride smiling, bride and groom looking at each other smiling, and of course, photos of the flowers. Does the fact that these photos begin and end as binary representations make them non-indexical?

As Wells (2015) described, “photographs can also exhaust experiences, using up the beautiful through rendering it into cliché” (Wells, 2015, p. 33). With social media, we take these snapshots on our own phones so that we can say “I was there.” Even though we had professional photographers at the wedding with both film and digital cameras, I still wanted to have my own photo, proving that photography has become a sociotechnical object. According to Wells (2015), photographs can be a “stand in for memories” (p. 20) and since my memory is below average at best, I will continue “making memories.”

Benjamin, W. (1936). “The Work of Art in the Era of its Technological Reproducibility” Harvard University Press: Cambridge, MA.

Irvine, I. “Introduction to Photography and the Optical Image.”